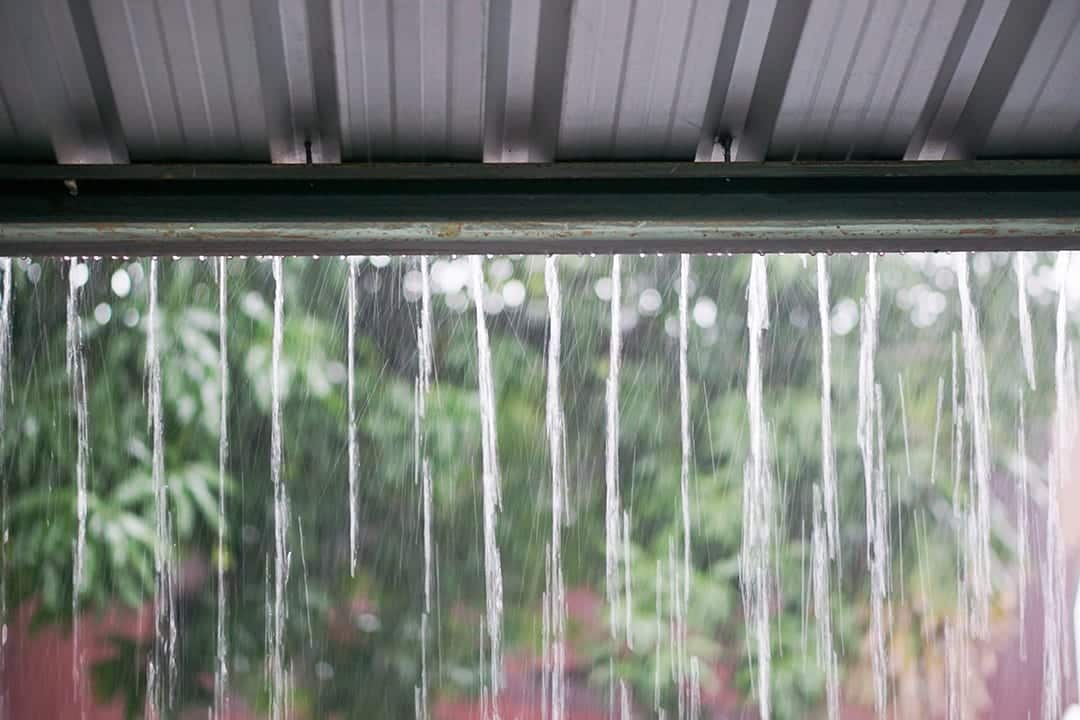 One of the most difficult parts of formulating exterior coatings is accounting for changes in weather. In the Pacific Northwest and Southeast United States, rainy seasons or extreme humidity can delay coating application or damage completed jobs due to precipitation during the film drying process. Not only can the paint appearance be negatively impacted by rain, but the film’s protection properties can be reduced. As a latex paint film dries, the solid particles crowd and polymer latex particles coalesce as the water evaporates from the film.1 If precipitation interrupts this process, the latex may not be able to form a continuous film over the substrate, leaving film defects or areas unprotected from exposure.

Coating manufacturers need reliable testing procedures to be able to evaluate performance of paint films even under high humidity or precipitation. Formulation techniques to build early rain or moisture resistance are required to develop products that can withstand precipitation within one to two hours after application.

Testing early rain resistance requires a method of delivering controlled precipitation as well as ensuring high humidity during the film curing process. Procedure criteria included the ability to adjust for changing environmental conditions such as cure temperature and humidity, adjustable precipitation rate, and sufficient reproducibility and error control. Various testing techniques were reviewed including application on drywall then spraying the film with water, use of the QUV under condensation, and testing in a fog box. A test method adapted from roof coating applications gave the best and most consistent results. The test method discussed can be used to determine early rain resistance properties of a semi-dry film under harsh testing conditions.

Materials required include an environmental chamber capable of sustaining temperature at 40°F and 75% relative humidity (RH). The early rain resistance testing apparatus is shown in Figure 1. 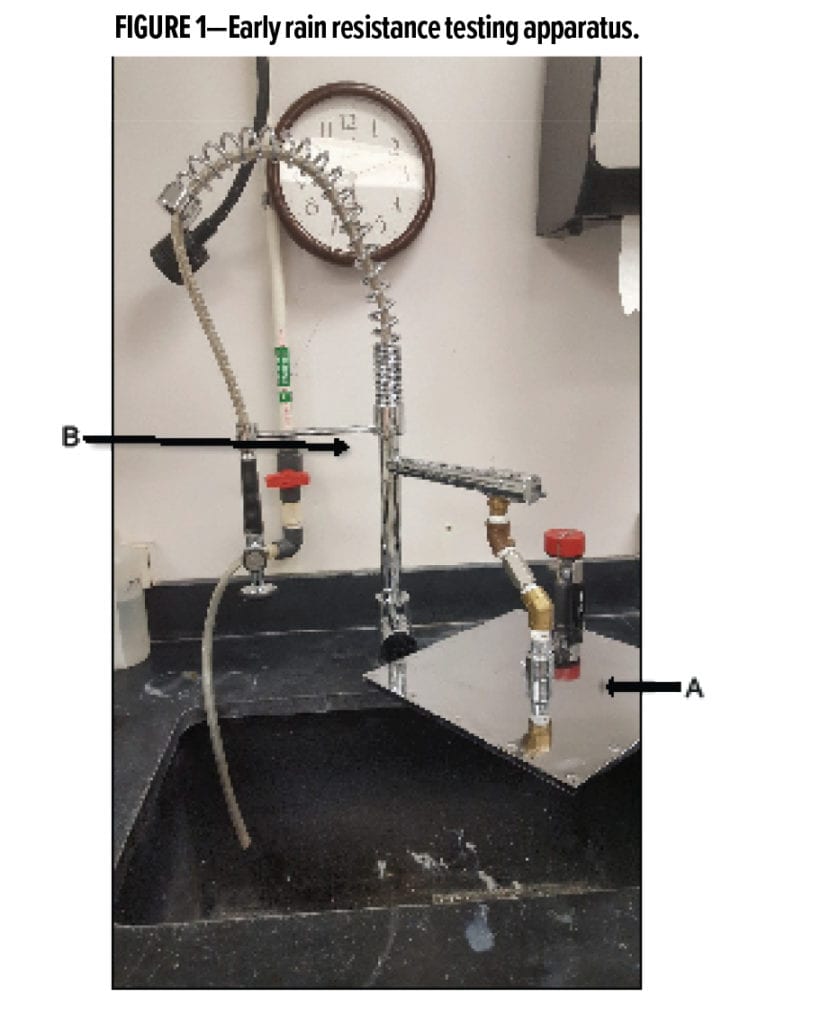 6. Environmental chamber set to requested conditions such as 75% RH and 40°F

To prepare the test panel, the paints to be tested were drawn down using the divided Dow bar at 7 mil film thickness. Samples were cured in the environmental chamber set to 40°F and 75% RH for 30 min. The cure time allowed the film to reach the point at which the open time ended and drying was almost complete.

Before the samples were tested, the water flow rate was measured and adjusted to ensure testing consistency between panels. The water flow rate was set to simulate a light rain. A 1 L beaker with a diameter of 108 mm was centered beneath the showerhead and used to collect water over a 30-sec time period. It was determined that a flow rate of 400 mL water per minute simulated a light rain, and only cold water was used in testing. The height of the showerhead was set for 12 in. above the test panel.

After the test panel cured, the panel was placed in the panel rack centered under the showerhead, and the timer was set to begin at the same time as the shower. The time at which the film first broke through was recorded. The breakthrough time is important because when the continuous film is interrupted, such as from damage from precipitation while curing, the substrate protection properties are significantly reduced. At this point, the substrate becomes exposed to elements, which can lead to further damage such as blistering, microbial attack, and potential cracking.

Panels were tested in duplicate for an average with the samples drawn down in different positions, as shown in Figure 3. 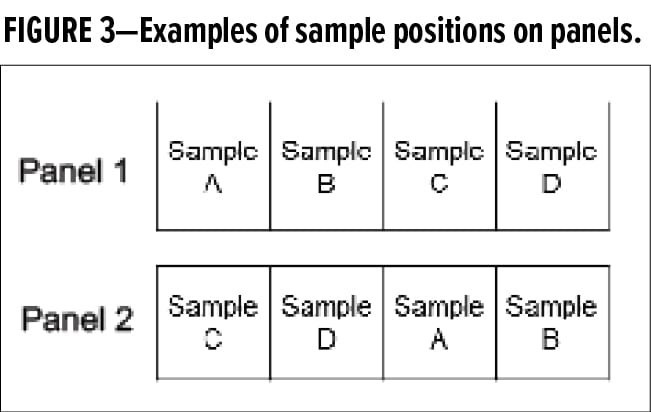 Commercial paints were tested to determine reproducibility in early rain resistance results using the test method detailed above. The paint samples included those with various marketing claims for early rain resistance. Each paint was tested in all four positions on the panel to determine result accuracy. The results were recorded as time to first film breakthrough in seconds. The testing results are shown in Table 1.

From the data, the average and standard deviation were calculated. The 3σ upper and lower limits were calculated to determine if the individual panel results fell within the 6σ range to
indicate result reliability. For each of the samples, it was noted that the results did meet the 6σ requirement. Also, there was a significant difference in early rain resistance times for commercial paints 1–4 compared to commercial paint 5, supporting the marketing claims for early rain resistance compared to the commercial paint without claims.

After examining the surfactant, coalescent, rheology modifier, and zinc oxide levels, we then evaluated the effect on low shear (KU) rheology development as well as early rain resistance as average time to film break through. We wanted to see how the paint viscosity could potentially attribute resistance to deformation of the paint film under stress from precipitation. The formula components were evaluated using Umetrics MODDE Pro in a response surface model with an optimization objective. Using the four-factor design of experiment (DOE) with two responses, 20 sample runs were made. Within the DOE, each formulation component was evaluated at a low loading (–1), nominal loading (0), and high loading (1). The nominal loading is the amount found in the starting point formula presented in Table 2. 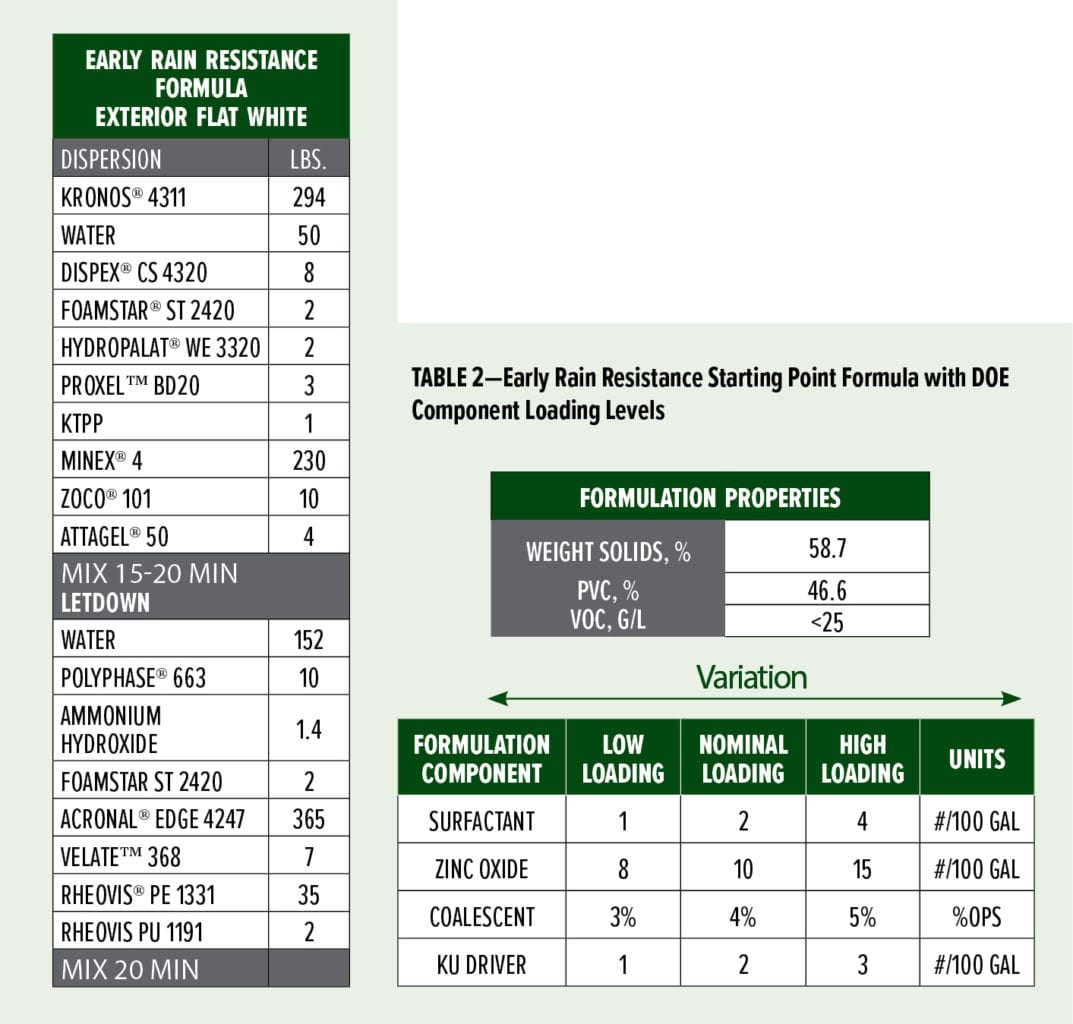 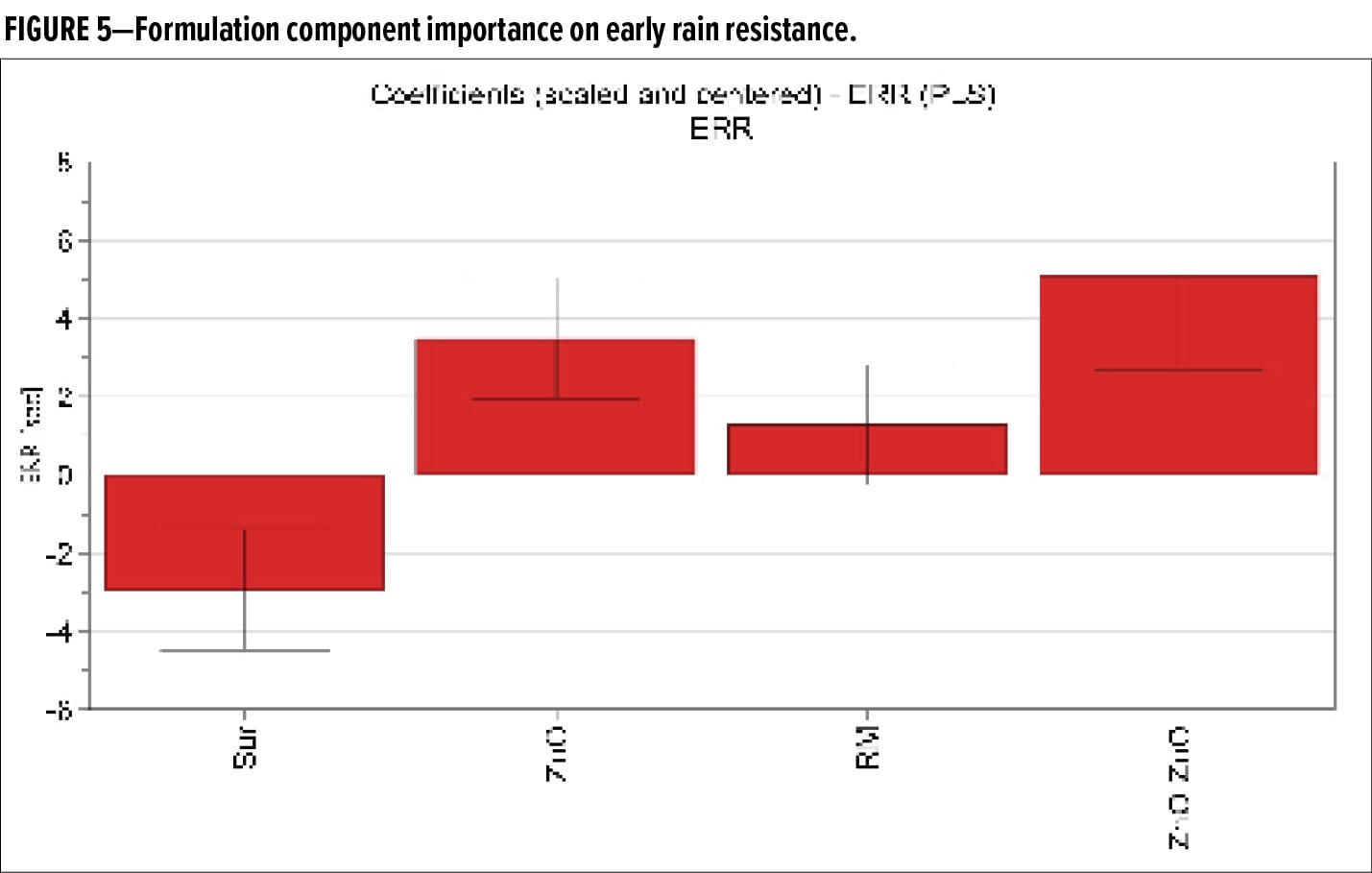 The results indicated that zinc oxide influenced the early rain resistance breakthrough time significantly more than the other formulation components. Zinc is used in the formulation to improve exterior durability, but it can be theorized that the zinc oxide enhanced the crosslink density of the film, which reduced sensitivity to moisture during film cure.2 When the MODDE analysis tools were used to predict an optimized formulation, it was determined that zinc oxide had a contribution factor of 46.1% and rheology modifier had a contribution of 31.8%. Surfactant and coalescent, while not necessarily significant for early rain resistance in lighter bases, should not be ignored as they may negatively impact other formulation performance properties as well as early rain resistance in deeper bases with a higher colorant loading.3 When formulating with zinc oxide or adjusting raw material amounts, the formulation should be re-assessed for in-can stability.

Our optimized formulation had a model projection of 46.5 sec for early rain resistance and a KU of 100, as shown in Table 3. 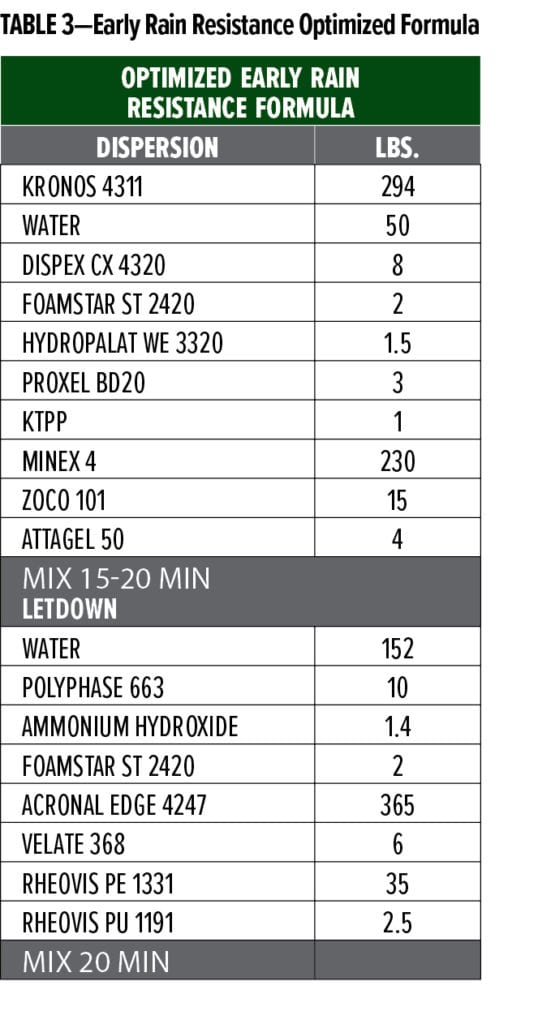 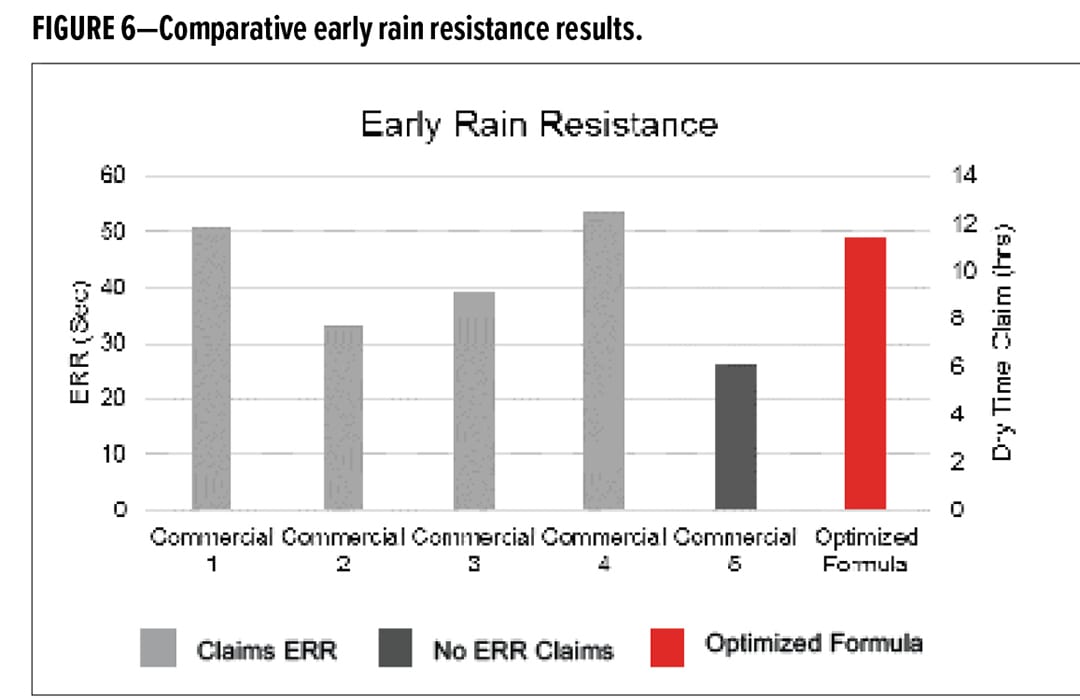 The author acknowledges BASF Corporation for support and guidance in the development of this paper.

Presented at the American Coatings CONFERENCE, April 9–11, in Indianapolis, IN.