It is often assumed that solvent-based sealers give better performance than water-based formulations on concrete because the solvent-based sealers are thought to better penetrate into the concrete matrix. In practice, it can be difficult to measure actual penetration of a sealer into concrete, as dyes and colorants used to highlight the sealer may show different migration properties than the polymeric binder. Confocal Raman spectroscopy mapping has been used to map the depth of penetration of solvent-based, 100% solids, and water-based sealers that employ acrylic and epoxy binders. This mapping shows that neither solvent-based nor water-based formulations showed any significant penetration into the concrete substrate beyond the first few microns of the open surface. A study has also been carried out using a model waterborne acrylic sealer formulation to determine whether additives might influence the penetration of the sealer into the concrete or other factors that could affect the performance of the waterborne coating. This work has shown that the addition of anti-foaming, coalescing surfactants can improve the protective properties of the coating by improving air release and increasing film network formation at the concrete surface.

Sealers are an important part of protecting concrete against surface damage, corrosion, and staining. They work by either blocking the pores in the concrete to prevent the ingress of water and water-soluble salts or by forming a polymeric barrier that prevents such materials from passing through to the substrate. Penetrating sealers contain reactive species, such as silanes, siliconates, and silicates that can enter the concrete matrix and react with minerals present to block the pores and create a hydrophobic and oleophobic barrier. Penetrating sealers have excellent durability but do not change or enhance the surface appearance of the concrete surface. They can also make further treatment of concrete difficult.1,2

Topical sealers are coatings that form a polymeric film and barrier at the concrete surface. They are prepared using many different chemistries, although acrylic, epoxy, and polyurethane binders are most common. Topical sealers may not last as long as penetrating sealers, but they can enhance and decorate the concrete surface and prepare it for additional treatment. Sealers are typically low viscosity coatings and contain either solvent or water as a diluent. Solvent-based sealers give a more glossy, wet-look finish, whereas water-based sealers often give a more natural-looking appearance. Many states now restrict the use and sale of solvent-based sealers for environmental, health, and safety reasons.

Concrete is a highly complex substrate, comprising mineral aggregates and fillers like sand bound together in a crystalline, inorganic matrix based on hydrated calcium and aluminum salts.3-4 Concrete is also porous, containing many natural air voids as well as capillary pores created during the release of water during setting and cure (Figure 1). The exact nature of the concrete and concrete surface will vary, depending on the supplier and local raw materials, although it is essentially a porous, mineral substrate for the sealers. 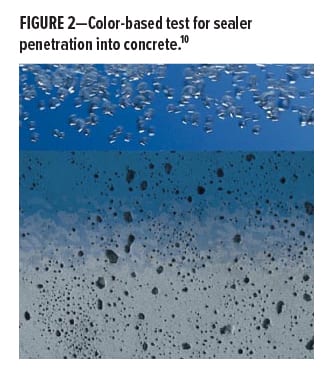 Penetration of Coatings into Concrete

The penetration of two different sealers into concrete substrates was studied by two different methods. The first method employed simple UV fluorescence to visualize the depth that two epoxy sealers penetrated the substrate. Simple stoichiometric mixtures of liquid epoxy resin (EEW 190) with either a liquid amidoamine hardener or a water-based hardener (Evonik’s Anquawhite® 100) were prepared, and applied by roller onto cleaned, shot-blasted concrete pavers purchased from a local DIY store. The pavers were about 6 x 12 in. (15 x 30 cm) in size and 2 in. (5 cm) thick, and the coating was applied to the shot-blasted side of the paver. The coated panels were cured for seven days under ambient conditions and then carefully cut in half to expose the concrete substrate. The cut surfaces were illuminated with short wave, UV radiation (“black light”), and the resulting fluorescence from the aromatic epoxy binder was photographed looking at the cut edge of the panel (Figure 3). In both cases, fluorescence was only visible at the coated surface and 1–2 mm below the surface, with almost no fluorescence visible further into the body of concrete paver, indicating that neither coating penetrated the concrete substrate.

Unfortunately, not all binders fluoresce, so an alternative method was needed to measure penetration of acrylic-based sealers. Confocal Raman microscopy couples a Raman spectrophotometer with an optical microscope together with a spatial filter to chemically analyze the volume of a sample in three dimensions. The limits of the spatial resolution are dependent on the laser and microscope objective, but it is possible to identify individual particles smaller than 1 µm.13 Raman spectroscopy is similar to infrared spectroscopy to the extent that it measures the internal molecular vibrations via a different mechanism. Infrared and Raman spectra often provide complementary information, but Raman spectroscopy is suitable for aqueous samples and samples containing high water content that can interfere with infrared spectroscopy.

Two commercial acrylic sealers were used (Behr Premium® Low-Lustre Sealer Water-based masonry sealer and Increte Systems’ Clear Seal 400 Solvent-based masonry sealer), and they were applied by both roller and brush onto cleaned, shot-blasted concrete panels. The coated panels were allowed to cure for seven days under ambient conditions before the coated concrete plates were fractured into manageable pieces, and one face on each section was polished using 600-grit abrasive film.

Raman spectra were obtained using a Horiba LabRAM HR Raman confocal microscope system and the operating conditions shown in Table 1. Spectra of the coating/concrete interface cross sections were obtained in a x = 19 µm by y = 24 µm grid, with 1 µm steps using a 1 x 1 µm pixel for complete overlap between steps. A small portion of each liquid coating sample was allowed to air dry on a glass slide, and Raman spectra of the resulting films were obtained. 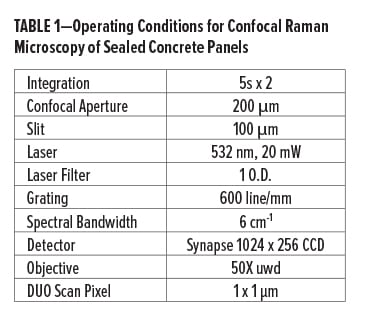 A sample image of a cross section of the roller applied, water-based sealers is shown in Figure 5a. The green rectangles in the images indicate the area mapped by Raman spectroscopy. The intensity of the C–H stretching band at 2931 Rcm-1 (integrated from 2818–3054 Rcm-1 with baseline correction) is represented by imposing saturation of green superimposed on expanded scale micrographs in Figure 5b. The green areas on the images end at the visible boundaries between the coating and concrete, indicating the coating is concentrated on the surface of the concrete. The nearly identical results with the solvent-based sealer are shown in Figures 6a and b.

This limited study suggests that there is limited sealer penetration into the concrete substrate, beyond the initial surface roughness and open capillary structure at the surface. Therefore, to address the real or perceived performance gaps between water-based and solvent-based sealers, more study is needed. Most sealers are unpigmented or only contain low levels of pigments and fillers, so improved resin technologies will be key to bridging the performance gaps,14-16 but other formulation components can also affect sealer performance.

Effect of Additives on Water-based Sealers

Water-based coatings often have higher surface tensions than solvent-based formulations due to the higher surface tension of water. Flow into capillary pores can occur when the adhesive forces of the liquid to the pore material are greater than the cohesive forces of the liquid to itself, so low surface tension is desirable for capillary flow and penetration.2, 11 Wetting agents (surfactants) are additives used to lower the surface tension of aqueous coatings; therefore, a number of different surfactants were tested in a water-based sealer formulation (Table 2) to determine whether they could improve performance and penetration into the concrete substrate. 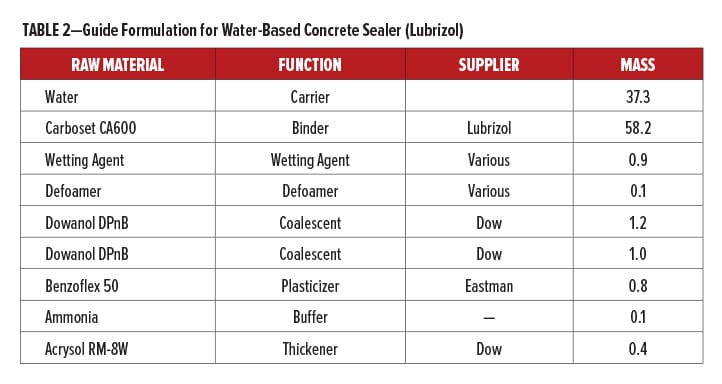 The surface tension of formulations containing different surfactants was measured using a Krüss Bubble Pressure Tensiometer–BP2 and the results are shown in Figure 7. The sealer without additives has a relatively low surface tension, but many of the surfactants tested lowered this considerably. The most effective products for reducing surface tension were the advanced acetylenic glycols. 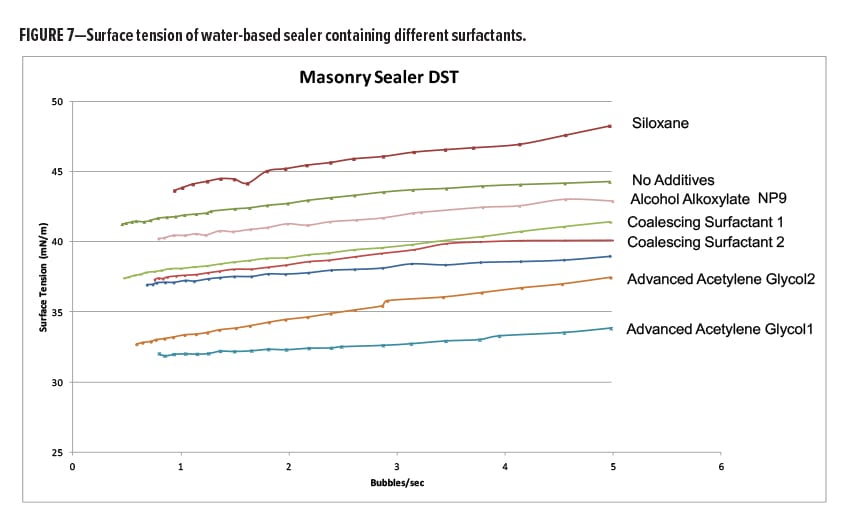 The different sealer formulations were also applied by both roller and brush onto cleaned, shot-blasted concrete panels and the panels tested for substrate penetration using the Confocal Raman mapping method described above. However, the results from the Raman mapping were nearly identical to the previous results, with almost no penetration into the concrete substrate regardless of the surfactants used (Figure 8). 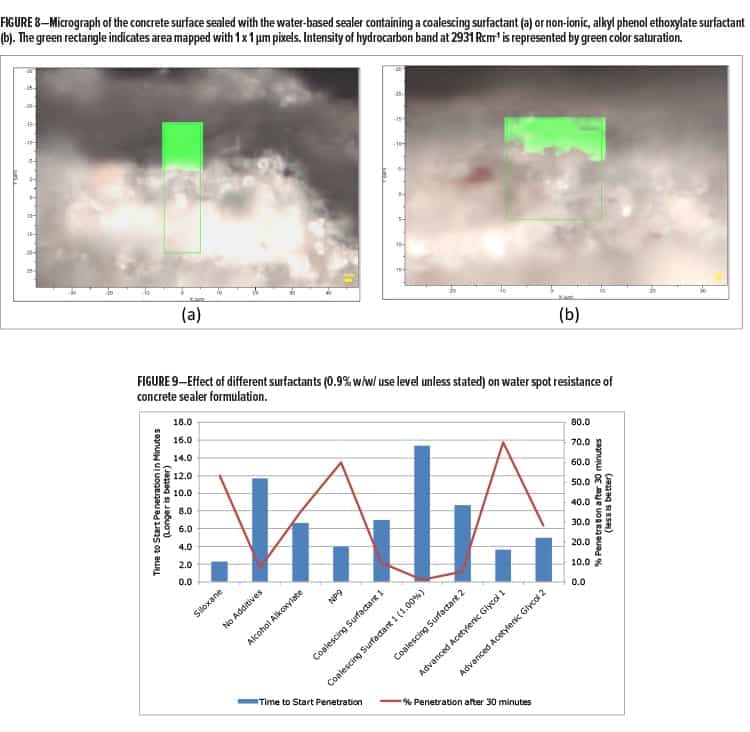 The water sensitivity of the sealed panels was also tested using a simple water spot method that measures the time for water to penetrate the sealer and become visible by a darkening of the concrete below the coating. A minimum of five tests per panel were used, and the tests were repeated with different panels, and the averaged results are summarized in Figure 9. This is a simple, visual test; the time to start penetration result is much more reproducible and thought to be more significant as it relates to barrier properties of the coating to the liquid water. The area of penetration is less reproducible as the can might spread both horizontally across the surface (which would be visible) and vertically into the depth of the concrete, which cannot be seen.

The best results were obtained with the formulations containing non-ionic, coalescing surfactants, although these did not give the lowest surface tension. The dried sealer gave a relatively low gloss film on the concrete surface that made visual and photographic comparison difficult, except when the surfactants were very foamy and surface bubbles were visible. The formulations containing the non-ionic, coalescing surfactants also gave the best appearance, both visually and under the microscope, especially when looking for dry, uncoated areas on the concrete, especially in some of the deeper holes in the concrete surface.

The choice of defoamer also affected the water sensitivity of the sealer. Both strongly incompatible defoamers that were highly effective at reducing foam and highly compatible defoamers (less effective at controlling foam) produced sealers that had poor water resistance. The strongly incompatible defoamers gave very poor surface appearance (craters or dewetting) when the sealer was applied over Leneta charts, and it is thought that these might also disrupt the film on the concrete surface allowing water to penetrate. However, it was not possible to confirm this visually. Similarly, defoamers that were too compatible left residual foam and bubbles in the dry films when the sealer was applied onto Leneta charts, and these bubbles are likely to remain when applied onto concrete; however, these also could not be seen visually or under a microscope. The optimum defoamers gave significantly improved water resistance (Figure 10). 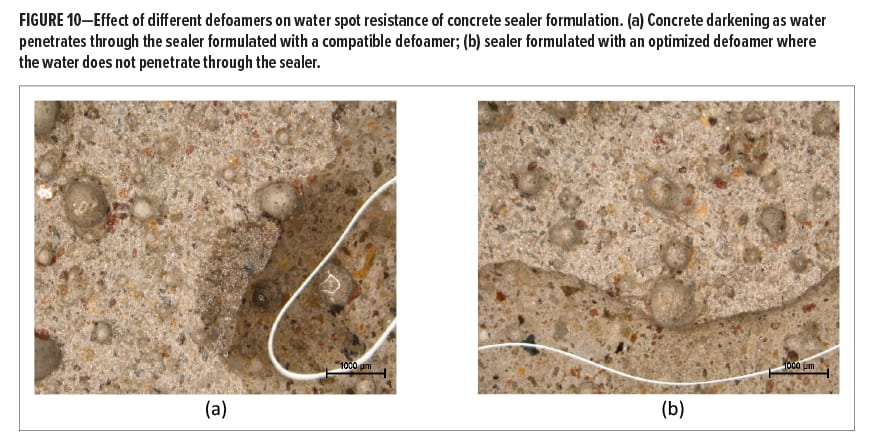 There are many different types of concrete sealers available, but the two most commonly used are film-forming acrylic sealers and penetrating sealers. Although they both seal concrete, they do so in different ways. Film-forming sealers work by forming a protective film atop the concrete and, whether water-based or solvent-based, do not appear to penetrate the concrete substrate.

The author wishes to thank Paul Marcella for helping to create the data and Ingrid Meier and Maria Nargiello for editorial assistance.

View All Architectural Coatings Articles
View All Concrete Coatings Articles
This website uses cookies in order to improve and customize your browsing experience. By continuing, you consent to the use of cookies for analytic and functional purposes, as discussed in the Types of Information Collected section of our Privacy Policy.AcceptRejectPrivacy policy