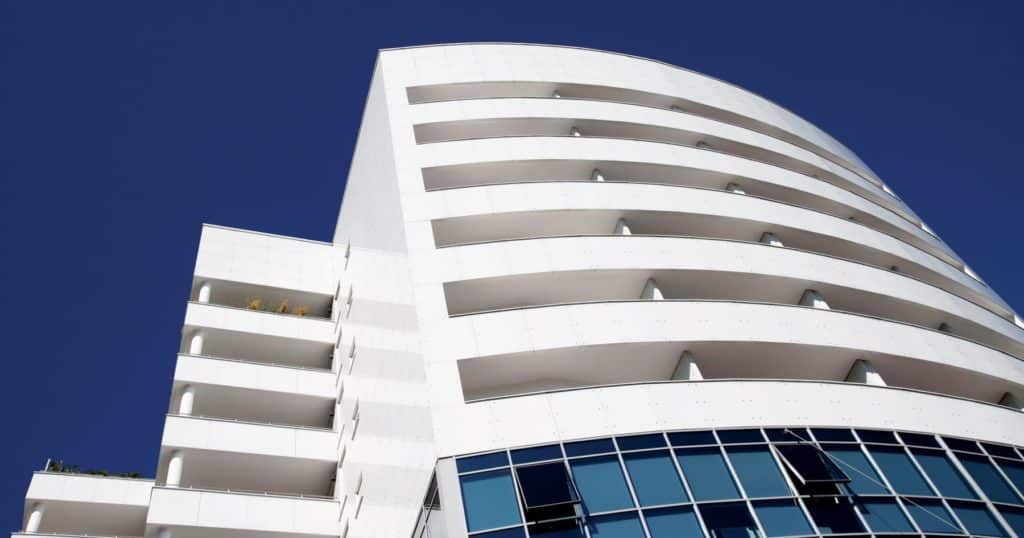 Architectural exterior coatings are subject to very harsh environmental elements. Extreme conditions like cold and hot temperatures, low and high humidity, and rain and snow test the ability of coatings to withstand cracking, limit water absorption, prevent leaching of materials from the surface, and adhere to multiple substrates. Another detrimental source of damage are UV rays, which induce polymer chain degradation leading to chalking and erosion of the coatings layer. Surface coatings are also subject to dirt and mildew growth resulting in a dirty appearance. When designing a polymer for exterior coatings, inventors must carefully consider the above destructive forces.

Professional and do-it-yourself (DIY) painters increasingly care about efficiency—reducing the time and labor involved in painting surfaces. Paints with paint and primer in one capabilities help reduce the time and labor of painting jobs, so developing a polymer that provides both primer and topcoat properties is necessary, but also challenging. This objective further raises the performance requirement for the exterior polymer.

This study focuses on developing a polymer that addresses key needs for paint and primer in one exterior coatings, such as dirt pick-up resistance (DPUR), leaching resistance, early rain resistance, gloss retention, grain crack resistance, adhesion, efflorescence resistance, and tannin blocking. The outcome of the study is a polymer that is designed to withstand the exterior elements in formulations featuring <25 g/l volatile organic compounds (VOC).

Dirt pick-up is a surface phenomenon and is mainly influenced by hardness of the coating, surface energy, surface porosity, and the nature of the dirt. Softer coating surfaces hold on to dirt better than harder surfaces; therefore, a harder polymer is required to improve DPUR. Both highly hydrophobic and highly hydrophilic surfaces can provide better DPUR. However, hydrophobic surfaces are preferred because hydrophilic surfaces reduce water resistance of the coating. Hydrophobicity can be measured in terms of water contact angle—the higher the contact angle, the better the hydrophobicity and the higher DPUR. Rough and porous surfaces tend to retain dirt better and consequently reduce DPUR.

A schematic of the film formation process1,2 of emulsion polymer dispersions is depicted in three steps (Figure 1). The steps are 1) water evaporation and particle concentration, 2) particle deformation, and 3) particle coalescence and polymer chain inter-diffusion. The degree of particle deformation and polymer chain inter-diffusion depends on the minimum film forming temperature (MFFT) of the particles. Good film formation at low VOC requires soft polymers or hard polymers with permanent coalescing agents. Permanent coalescing agents remain in the film forever and reduce the hardness of the coating. Both soft polymers and hard polymers with permanent coalescing agents lead to reduced DPUR. Thus, low VOC and better DPUR are conflicting demands and a tough problem to solve.

Rain and dew can leach water-soluble materials from the coatings surface and create a less than desirable appearance (Figure 2). Leaching resistance of coatings can be improved by reducing water-soluble materials, tailoring film formation kinetics, improving early water resistance, and incorporating crosslinking chemistry. Leaching of materials from the surface will ultimately create a porous surface, which can reduce the DPUR of the coatings. In Figure 3, more red iron oxide adheres to the leached surface, which appears as a darker red trail.

Polyphenols (tannin) found in wood and salts in concrete/masonry substrates migrate into coatings and negatively impact their appearance (Figures 4 and 5). Some of the factors that control these migration phenomena are film formation kinetics, hydrophobic–hydrophilic balance of the coating, water-soluble materials, functional groups in the polymer matrix, encapsulation of migrating materials, and adhesion of the coating to the substrate.

The performance of this novel polymer was tested along with four competitive polymers (competitive latex A through competitive latex D) in an architectural white flat coatings formulation. The formulation and its physical characteristics are given in Tables 2 and 3, respectively. These paints were tested for topcoat and primer properties, and the results are discussed in the following section.

Tinted paints (2% Phthalo blue) were drawn down on a Lenetta black scrub chart using a 250 m gap bar. Tests were done at cure times of 4 h and 24 h. At each cure time, three drops of water were deposited at the top of the drawn down paints. At 10 min, the chart was tilted to run the water off the panel. After 24 h, the appearance of the water trails was rated on a 0 to 10 scale with 10 being no change and 0 being severe change.

Tiles prepared from plaster of Paris were coated with a specified amount of paint leaving one inch unpainted at one end. The paints were cured for 24 h at 72°F and 50% humidity. The uncoated ends of the tiles were placed in a sand bed soaked with 1% sodium sulfate solution for two weeks. Then, the appearance of the painted end of the tiles was recorded.

Paints were drawn down on aluminum Q-panels using a 250 m gap bar and dried at 72°F and 50% humidity for 25 min. Then, the panels were placed under a 12-in. square shower head and showered for 10 min at constant water flow. The appearance of the test paints was compared to the appearance of a control paint.

Tannin blocking was tested according to ASTM 6686-1 test method. Y reflectance and yellowness index were measured, not L* and b*.

Leaching test results after dry times of 4 h and 24 h are shown in Figure 9. The novel polymer and competitive latex A show similar performance at both dry times, but the other latices show inferior performance.

Tannin blocking of the coating is tested using Redwood and the results are shown in Figure 11. Figure 11 shows the performance in terms of DY reflectance and D yellowness of the two-coat surface. The novel polymer has the lowest DY reflectance and Dyellowness indicating the lowest amount of tannin migration to the coating. Figure 12 shows a Redwood board with one and two coats of paint (paint and primer in one application). The novel polymer with the second coat of the paint has the whitest appearance.

The results are shown in Figure 13. The tile coated with the novel polymer-based coating does not show any salt or defect on the surface, indicating outstanding efflorescence resistance. All other paints show copious amounts of salt on the surface of the tile due to salt migrating through the coatings layer.

The novel polymer shows superior corrosion resistance along the scribe and on the surface at 250 h of testing (Figure 14).

Tensile stress and elongation play a critical role in controlling grain crack resistance. The paint film mechanical properties for the novel polymer, competitive latex B, and a leading commercial paint are provided in Table 5. The novel polymer has a much higher elongation without significantly compromising tensile stress. The % elongation is an important feature for withstanding harsh exterior elements, including hot and cold weather and freeze-thaw cycles.

A semi-gloss paint formulated with novel polymer and a leading commercial paint were tested for accelerated weathering according to the ASTM D4587-11 test method using UV-A radiation without condensation cycle. The results are given in Figure 15 and Table 6. The novel polymer shows excellent gloss retention and minimal color change.