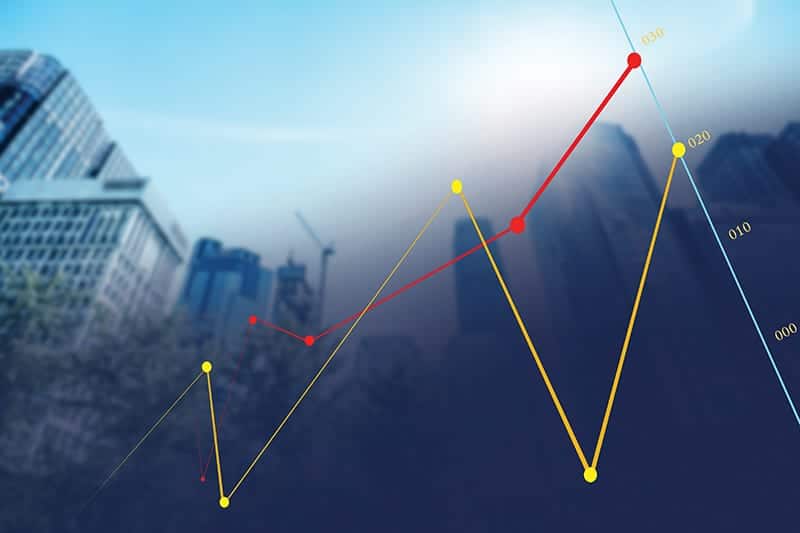 For a number of years, ACA has conducted a survey of senior industry executives to determine how they collectively view the current business climate for our industry and to determine how they believe their firms and the industry will fare over the next year or so. The Fall 2016 Economic Climate Survey, like its recent predecessors, found that the industry’s senior leadership holds a relatively optimistic view of both its current situation as well as its prospects over the next year. If the opinions of the industry’s senior business leaders are on target, the coatings industry should maintain its trajectory of continued growth in 2017.

Economic Context for the ACA Survey

Since the end of the Great Recession, the coatings industry has seen largely unabated growth. As shown in Figure 1, the overall volume and value of the industry’s output have consistently grown at a roughly 3–4% rate over most of the period following 2010.
This steady growth in both volume and value tracks the steady improvement in both the housing and construction markets since 2010, along with a resumption in the growth of durable goods manufacturing during the recovery. Sales of existing homes, one of the major drivers of paint demand, have consistently averaged over 5.2 million units (annualized) for over a year now (as compared with less than 5 million in 2014). Overall construction spending has risen steadily since its recent low point in early 2011 and has recovered to nearly the level it last achieved during the height of the housing boom in 2006 (Figure 2).

Going forward, overall construction spending growth is expected to remain positive. The National Association for Business Economics (NABE) compiles a consensus macroeconomic forecast based on the views of a panel of 50 professional forecasters. While the NABE panel’s September 2016 outlook is that GDP will average 2.3% growth in 2017, the panel’s median forecast for residential spending is for 6.3% growth in 2016—although the panel is predicting slightly lower growth (2.7%) for nonresidential investment.

Dr. Bernard Markstein of Markstein Advisors, an economist who focuses on construction, is projecting somewhat higher growth in construction spending in 2017. Markstein’s forecast for residential construction is 6.5%, which is in line with the NABE panel. However, he is more bullish on nonresidential construction, forecasting growth of 4.7% in 2017, and also breaking out residential improvements (remodeling, renovation, and replacement work), a category which often involves repainting, for which he forecasts an increase of 7.4% in 2017.1  Dr. Markstein noted that the recent election could affect construction going forward. For example, he observed that health care construction could be much lower if Obamacare is repealed or significantly constrained. Similarly, spending forecasts for infrastructure projects could be positively affected, though it is not clear to what extent Congress will support Trump’s proposals for new spending—the big question being funding.

Similarly, the manufacturing sector, which is the primary driver of demand for OEM coatings, has shown continued strength since reaching its low point at the end of the recession. Overall durables manufacturing has plateaued somewhat in the past year, reflecting a number of factors, including the continuing strength of the U.S. dollar, but the motor vehicle sector has continued its strong recovery from its lows of 2009 (Figure 3). The NABE panel is forecasting that 2016 industrial production growth will be negative, ending with a 0.7% decline, but the panelists forecast improving industrial production in 2017 with anticipated growth of 2.0%.

Dr. Kevin Swift, chief economist at the American Chemistry Council, follows industrial production closely due to the large impact it has on chemical demand (including coatings). He sees the motor vehicle market at or near peak for this economic cycle, but sees U.S. light vehicle sales remaining elevated due to pent-up demand, improving employment (and income) prospects, better availability of credit, and continued low gasoline prices. He is currently forecasting sales averaging 17.4 million in both 2016 and 2017 and then declining slightly to 17.1 million in 2018.

The ACA annual survey is intended to capture and share the collective viewpoints of member companies’ senior executives and provide some insights into current and future business experience and expectations. ACA conducted the 2016 survey between September 9–23, 2016. The level of industry participation in this survey has remained strong: in all, 57 ACA member company executives participated this year. Approximately half of the respondents represented coatings manufacturers, and the remainder represented supplier members, distributors, and other members.2 Of the participating coatings manufacturers, approximately 78% market their products nationally, with the remainder serving regional markets; and the mix of large and small-to-medium companies shows about 44% having sales exceeding $100 million, and about 56% below that line. Supplier and distributor participants were similarly representative, with about 44% reporting sales in excess of $250 million into the coatings market, and the rest having coatings-related sales below that figure.

The context in which the 2016 survey was conducted is not only the relatively steady pace of the U.S. macroeconomic recovery since the recession ended in 2009, but also the generally strong growth in coatings demand that the industry has experienced during the past few years. The coatings industry grew 2.9% in volume in 2015—Architectural and OEM coatings were up, while Special Purpose was down. The industry is also projected to grow at a 3% rate (volume) and 3.3% (value) in 2016.3 The responses to this survey, particularly the projections for future growth, should be seen in the context of a number of years of sustained and rising industry production.

Overall, the respondents in this year’s survey provided a slightly more upbeat outlook for the industry than they did in the 2015 survey.4 This year’s survey saw manufacturers and suppliers5 expressing relatively consistent views on current (2016) conditions versus 2015, with both coatings manufacturers and suppliers expressing generally positive outlooks. (In last year’s survey, coatings manufacturers were noticeably more positive than supplier respondents.) Although slightly fewer than half of the respondents considered the current economic conditions to be about the same as last year’s (as shown in Figure 4), a notably larger number of 2016 respondents viewed conditions as better as compared with those who consider conditions worse than a year ago.

In addition to asking both coatings manufacturer and supplier respondents to compare current economic conditions to those their companies faced one year ago, the survey asked respondents to look back two years and provide their views as to how they perceived current conditions in comparison to two years ago (2016 vs 2014). As Figure 6 shows, while a slight majority of both manufacturers and suppliers saw current conditions as either having improved (or at least having stayed the same) compared with those of two years ago, suppliers expressed a slightly more positive view of current economic conditions than did manufacturers—a reversal of the 2015 survey results, in which 55% of coatings manufacturers evaluated conditions as “better” over the two-year period (2015 vs 2013), while less than 20% viewed them as “worse.”

Companies were also asked to report their company’s current production volumes versus those of a year ago. (Suppliers were specifically asked to consider only that output produced for their coatings industry customers). Responses again generally showed solid year-over-year growth, with manufacturers expressing a slightly more positive view. As shown in Figure 7, the majority of this year’s manufacturer respondents reported increases in current production volumes over those of a year ago. Slightly under half of suppliers (48.1%) showed production growth exceeding 1% in the same time frame. These results were noticeably stronger than the comparable responses in the 2015 survey, which seemed to suggest deceleration of growth (Figure 8).

Macroeconomic and other threats to the overall U.S. economy remain a concern to respondents. Both manufacturers and suppliers agreed (as they also did in 2015) that the largest single threat by far was the possibility of a recession in China and/or Europe, with other potential threats, such as price deflation and an interest rate hike by the Federal Reserve, not falling far behind, as shown in Figure 11.6

Responses regarding challenges and risks to their own company always provide interesting insight into the respondent’s views about the year ahead. Suppliers and manufacturers were both presented with the same list of such challenges and risks, and interestingly, their perspectives varied a great deal, as demonstrated in Figures 12 and 13. Manufacturers, as have usually been the case, considered regulatory pressures as their biggest challenge, followed closely by concerns about potential raw material price inflation, while suppliers were most concerned about supply chain issues.

The survey respondents were asked to provide their outlook for three key markers of coatings demand: new home construction, existing home sales, and commercial property maintenance (Figure 14). They generally foresee moderate growth (in line with the forecasts noted in the introduction to this article). Two thirds or more see growth in the year ahead.

The ACA respondents’ forecast for manufacturing activity was also very similar to consensus forecasts. The ACA group generally predicted moderate to flat growth in those areas, with the forecast for durables slightly more optimistic than that for motor vehicles (Figure 15).

The results of this year’s survey appear to show both positive current conditions, as well as anticipation of solid growth in the industry, building upon an unbroken string of growth that extends back to 2010.  Coatings demand is highly dependent on construction and real estate mobility, as well as manufacturing. Where those key parts of the economy are headed is critical to the health of the coatings industry. Should the U.S. economy continue its expansion, there is reason to expect that the coatings industry will also continue to grow.

1    Forecast: Markstein Advisors, October 2016.  Note that the Markstein forecast, unlike the NABE figure, is for nominal dollar growth, and there are other methodological differences between them that render them somewhat not an “apples to apples” figure.

2    The survey was sent to a select group of senior executives who participate in the Architectural and Industrial Coatings Leadership Councils, and Industry Suppliers Committee, along with other selected members. The survey was conducted online, and all responses to the survey are completely anonymous. Note that since some ACA member companies have more than one representative serving on one of these committees, the number of respondents does not necessarily equate to the number of separate companies represented in this survey. Additional detail is provided in a summary available in the digital issue of CoatingsTech.

4    As noted, ACA conducted a similar survey of industry executives in 2015, as well as in previous years.

5    Unless otherwise specified, references to “suppliers” in this report also include distributor and other non-manufacturer respondents.

6    Note that this survey was conducted in advance of the 2016 elections. Respondents may have made assumptions about the outcome of those elections that might have been proven incorrect.