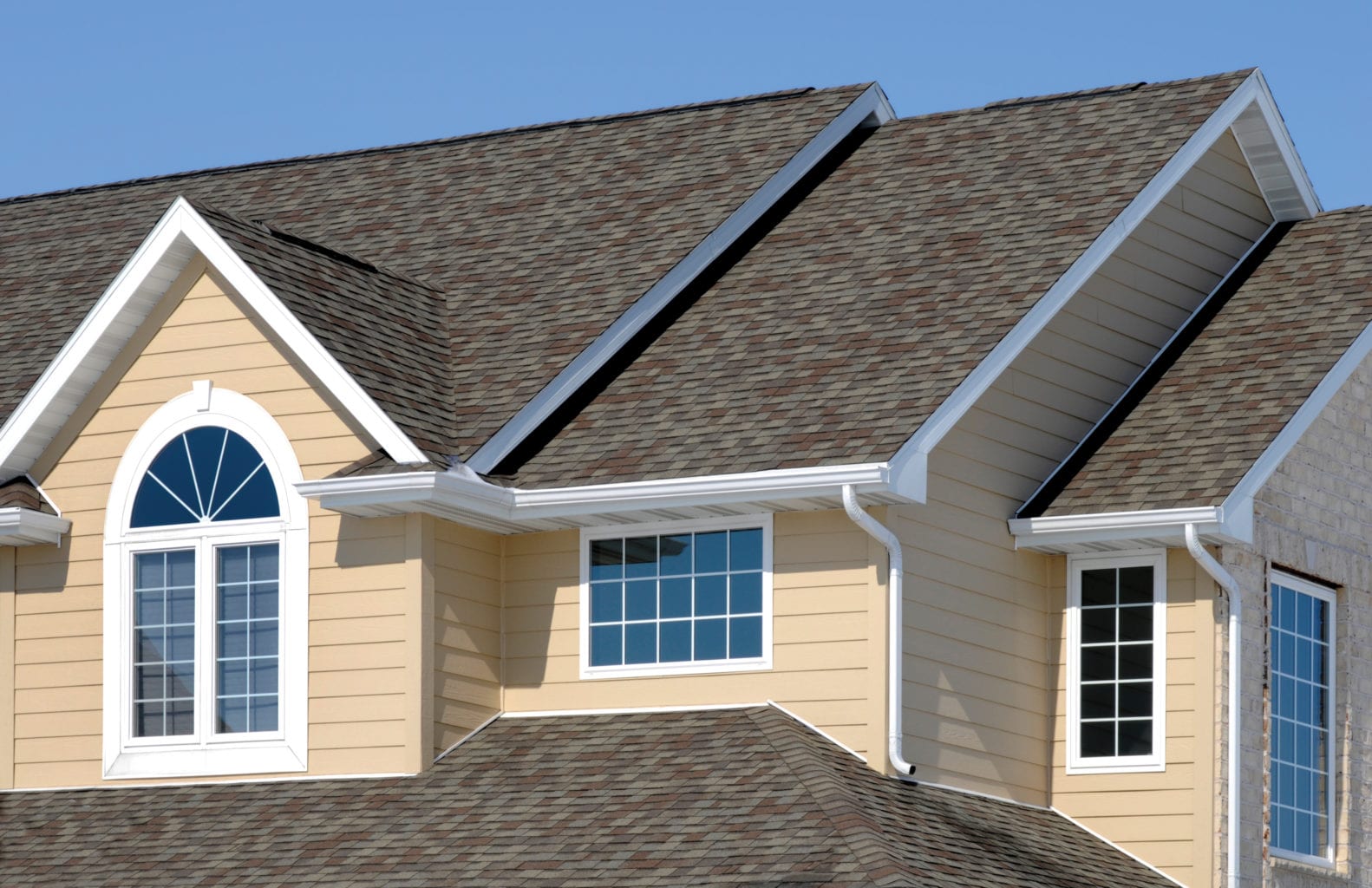 Two-component waterborne polyurethane (2KWB PU) coatings have been recognized as coatings with excellent performance properties, and they are used in a wide variety of applications.1 However, they require the introduction of a curing agent as a second component to provide the crosslinking needed to enhance coating performance. Several challenges for 2KWB coatings are well known, including limited pot life, increased waste, potential risk for mixing failure, and additional process steps before application. Therefore, in certain markets, paint formulators continue to look for one-component waterborne (1KWB) coatings that perform comparably to 2KWB coatings; for example, coatings for the residential vinyl window market. Vinyl windows represent more than 70% of windows sold in the United States residential window market2 and nearly all of them are white in color. Consumers are demanding more color options and, to meet that demand, window manufacturers are painting more and more windows today. Currently, 2KWB coatings are the market standard, but window manufacturers and applicators are seeking high-performance 1KWB coatings that are easy to apply and provide comparable performance to the 2KWB coatings being used today. This article discusses the physical properties, as defined in American Architectural Manufacturers Association (AAMA) 615-13 specification,3 of a newly developed 1KPUR dispersion (hereinafter called “Next-gen 1KPUD”) that demonstrates comparable performance properties to 2KWB coatings used to paint residential vinyl windows today.

The development program succeeded, identifying a 1KWB PU dispersion with comparable performance to a 2KWB PU. The novel 1KWB PU dispersion, Next-gen 1KPUD, was synthesized using a prepolymer mixing process.4 Key properties of this PUD are listed in Table 1.

Physical properties for American Architectural Manufacturer Association (AAMA) 615-13 of paint formulated with the Next-gen 1KPUD were compared to three different commercially available paints for vinyl windows. Two of them were 1KWB systems and the other was a 2KWB system. Physical property testing on each system was conducted according to AAMA 615-13 specifications. Table 3 shows a summary of all tests that were conducted. All systems were spray applied on PVC panels at a target dry-film thickness of 1.5 mils. All panels were initially wiped with acetone prior to coating application for performance testing. 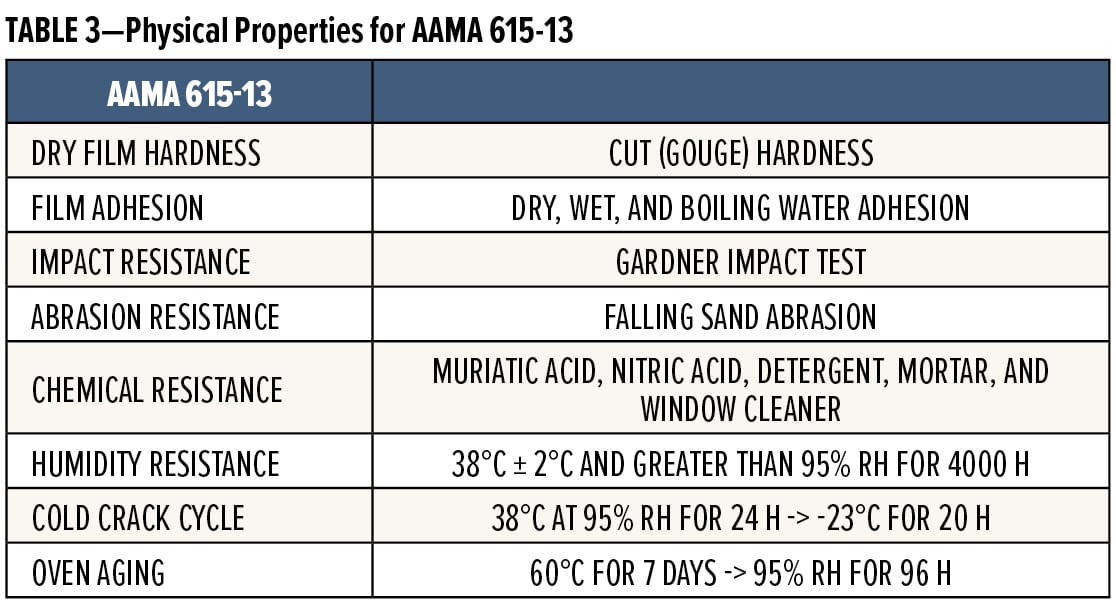 Panels were allowed to flash dry at ambient conditions and dried at 50°C for 10 min. All testing was conducted after an additional seven-day rest at ambient temperature. Table 4 shows a generic formulation used as the base formulation for this study. 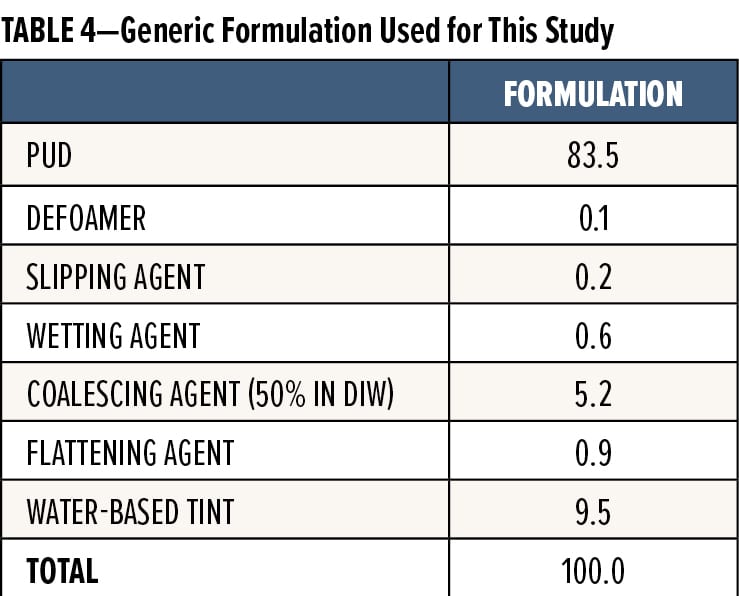 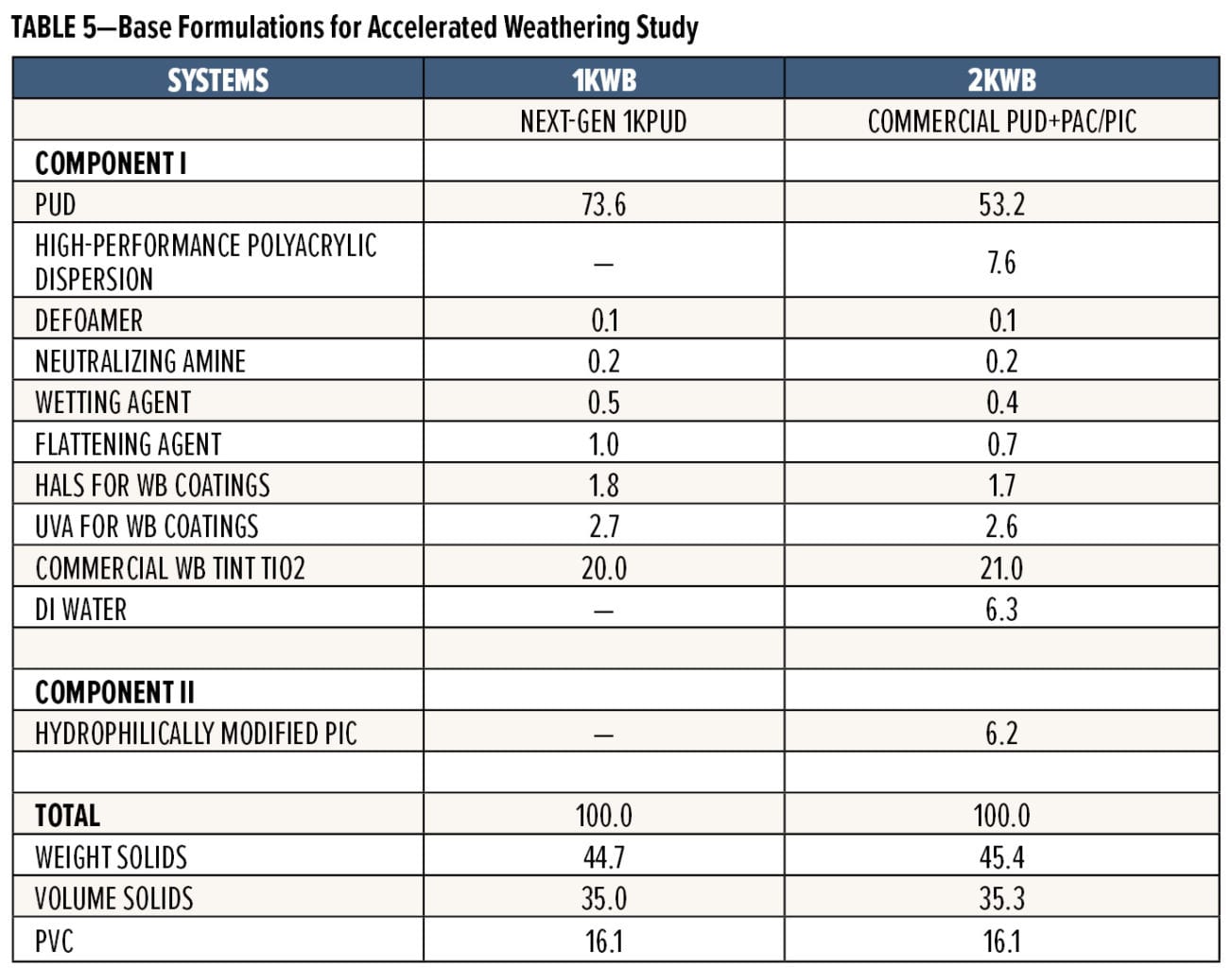 All systems were spray applied on chromated aluminum panels at a target dry-film thickness of 1.5 mils. Panels were allowed to flash dry at ambient conditions and then dried at 50°C for 10 min. Testing began after an additional seven-day rest at ambient temperature. The accelerated weathering tests were performed in a Xenon arc Weather-Ometer Ci-65 (Atlas Material Testing Technology, USA) according to ASTM D6695 (Cycle 1) and in a QUV/se (Q-Lab Corporation, USA) according to ASTM D4587 (Cycle 2). Gloss retention and color retention were measured for a total time of 2,000 h. Gloss retention was determined using a gloss meter (Micro-TRIgloss) manufactured by BYK Gardner Corp., and Delta E was determined using a spectrophotometer (Color i7) manufactured by X-Rite, Inc., as described in ASTM D 2244.

Physical properties of the Next-gen 1KPUD were compared to commercially available 1K PUDs and 2KWB PU systems. The results of chemical resistance and stain resistance testing are summarized in Table 6. As compared with commercially available 1K PUDs, the Next-gen 1KPUD showed superior chemical and stain resistance. It outperformed even PUD-D, a polycarbonate-based resin, known for high hardness and physical performance. Furthermore, its chemical and solvent resistance matched even those of the crosslinked 2KWB PU coating (PAC-A+PIC-B). 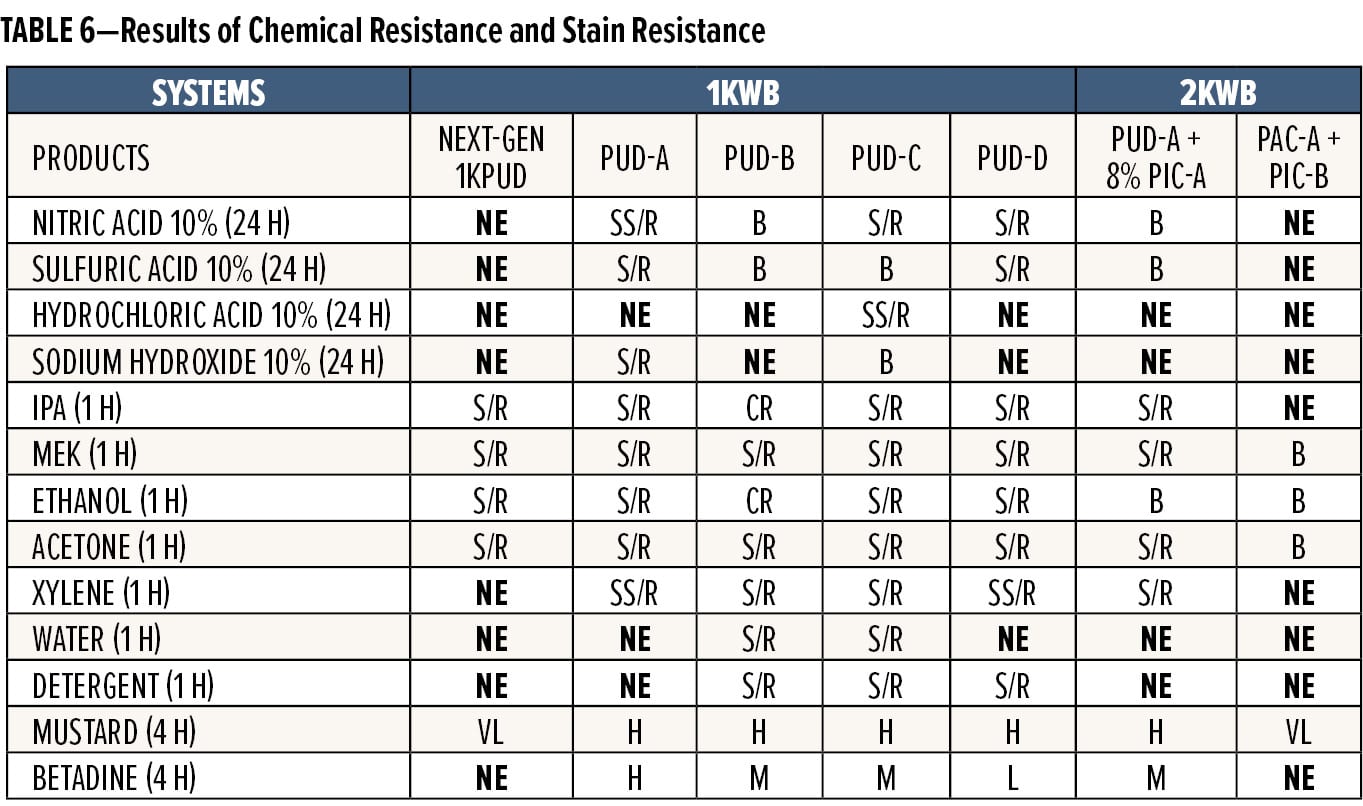 Fast-drying properties and film hardness development are required at most coating applicators to ensure high productivity; therefore, each formulation’s dry time and König pendulum hardness development were evaluated. These results are summarized in Table 7. The Next-gen 1KPUD showed the fastest dry-hard time of all systems tested. This result is consistent with the PUD’s higher Tg (Table 2) and its high molecular weight polyol in its backbone. The 2KWB systems, which rely on the chemical reaction between its isocyanate and polyol components, showed expectedly slow dry times at an ambient drying condition.

Humidity resistance is another key physical property in understanding the degradation of coatings due to water. To assess water resistance, blister formation on the film was measured after exposure to moisture. The result is summarized in Table 8. PUDs based on polycarbonate diols are known to have good water resistance due to better hydrolytic stability. The Next-gen 1KPUD, even though it is not polycarbonate-based, matched the humidity resistance of the polycarbonate-based PUD that was tested, PUD-D. It even outperformed the two 2KWB PU systems that were evaluated. 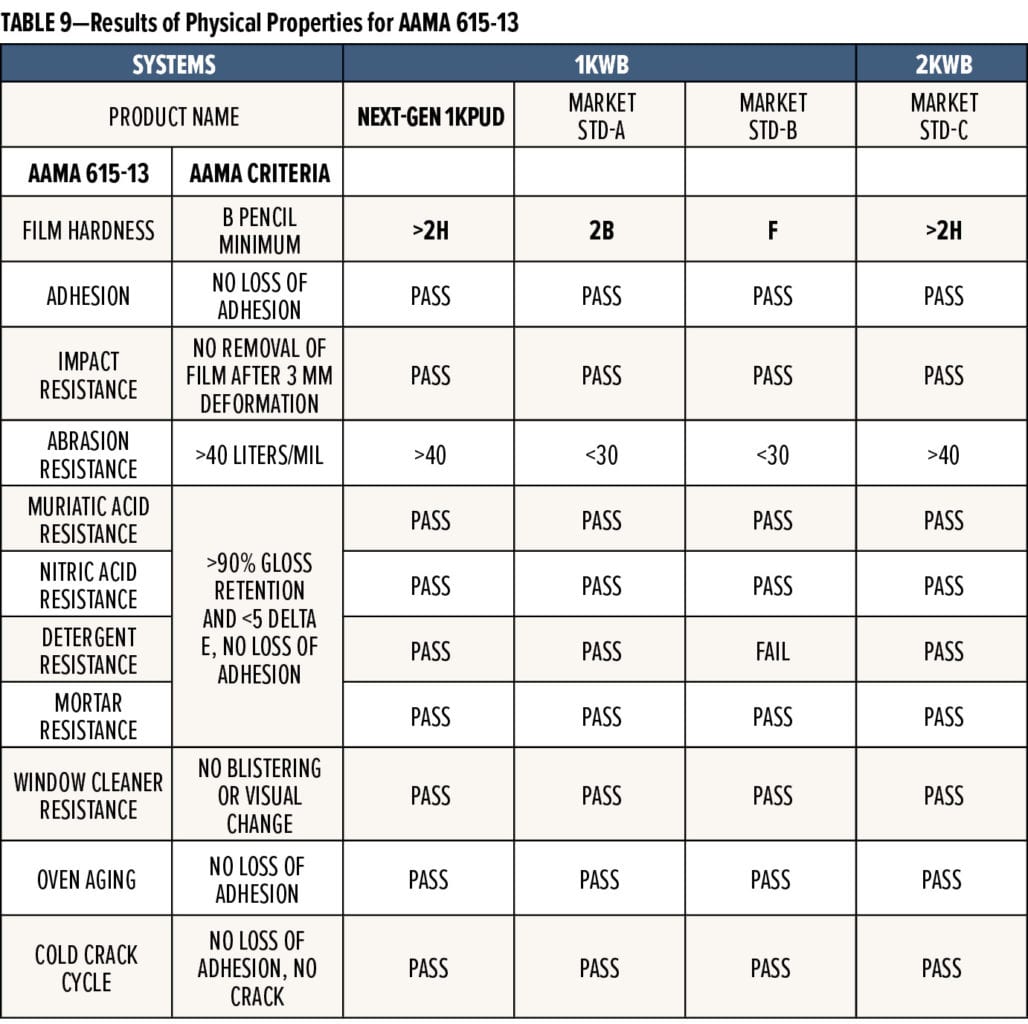 The most noteworthy result of the coating formulated with the Next-gen 1KPUD is its high pencil gouge hardness. The need for increased film hardness compared to the AAMA specification (min. B) is highly desirable by coatings applicators and window manufacturers for vinyl window applications. They would like to avoid potential damage during packaging, transportation, and installation of windows on site. As expected, the commercial 2KWB paint had much higher pencil hardness than other commercial 1KWB paints. The 2KWB PU’s crosslinked structure imparts toughness to the film which a 1KWB PU lacks. Surprisingly, the Next-gen 1KPUD matched the film hardness of the 2KWB system, while also lacking this crosslinked structure.

To understand long-term weathering performance, the Next-gen 1KPUD was compared to both commercially available, high-performance 1K PUDs and a 2KWB PU system using two protocols. First, to compare the Next-gen 1KPUD’s weathering to commercially available, high-performance 1K PUDs, the films were exposed to QUV-A following ASTM D4587 C2. The results are shown in Figure 1. The Next-gen 1KPUD maintained 100% gloss retention after 2000 h, while PUD-D (polycarbonate-based PUD) started to reduce gloss after 1000 h and PUD-A (polyester-based PUD) started to reduce gloss even sooner, after only 750 h. 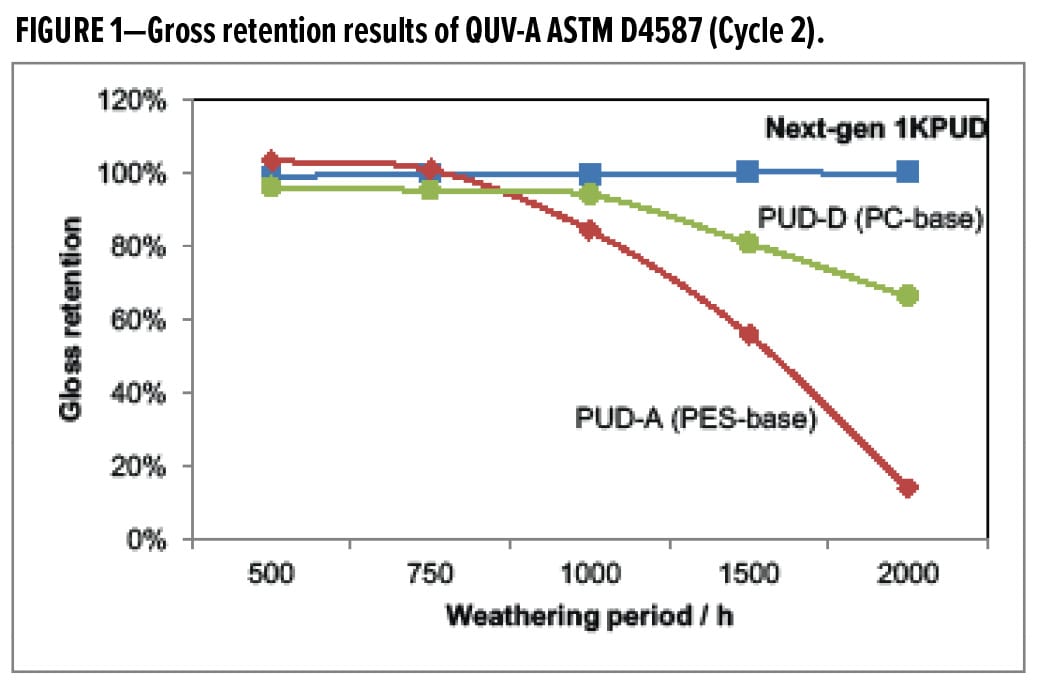 Second, to compare the Next-gen 1KPUD’s weathering performance to a 2KWB PU coating, it was formulated with a white pigment to match the 2KWB PU coating. The results of the Xenon arc weathering testing are summarized in Figure 2. 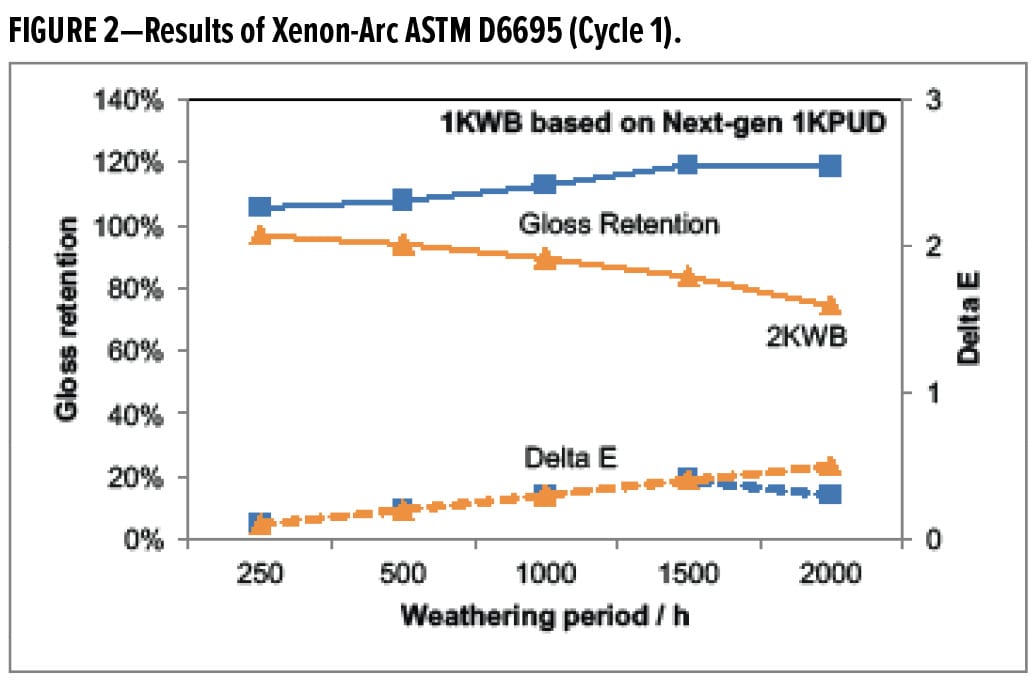 The Next-gen 1K PUD, a novel 1K PU dispersion, outperformed commercially available 1K PUDs by exceeding their chemical and stain resistance and matched even the performance of crosslinked 2KWB coatings. Moreover, the Next-gen 1KPUD demonstrated faster dry times than the 2KWB coatings, which will increase productivity during the coating application. A coating formulated with the Next-gen 1KPUD passed all the AAMA 615-13 physical performance requirements. Further, its film hardness matched that of a crosslinked 2KWB coating. Finally, accelerated weathering tests under QUV-A and Xenon arc exposure showed that a coating formulated with Next-gen 1KPUD will outperform commercially available 1K PUDs and a 2KWB coating that were evaluated.

The author would like to acknowledge the contributions of Lyubov Gindin, Stephanie Goldfein, Natalee Smith, Tom Durkin, and Phil Jones to this paper and thank Ron Konitsney, Tina Kasardo, and Derick Henderson for preparing paint formulations and conducting the studies described in this article.

Presented at the American Coatings Conference, April 9–11, 2018, in Indianapolis, IN.