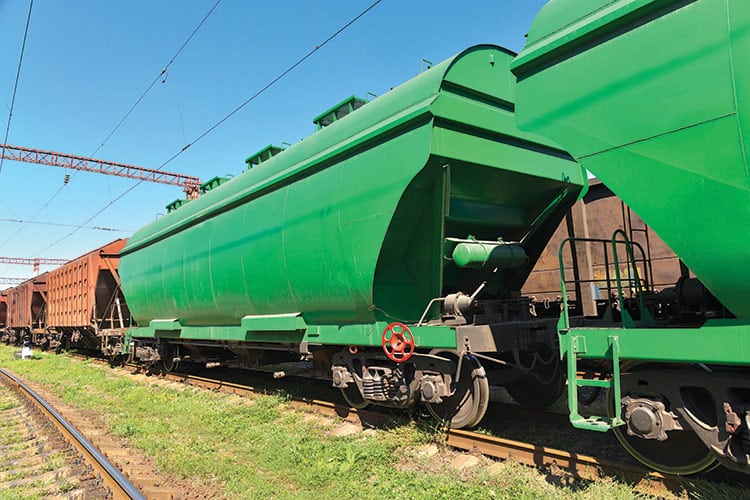 Corrosion is a process where a refined metal, such as aluminum or iron or alloys such as steel, undergoes degradation. In scientific terms, corrosion is an electrochemical process leading to oxidation of the metal and returning it to its natural state, such as iron being converted to iron oxides. Electrochemical reactions eat away at the underlying metal substrate, sometimes degrading it to such an extent that it creates aesthetic, mechanical, or structural failures.

The economic impact of corrosion is enormous. In a recent report, corrosion was estimated to cost the global economy more than $2.5 trillion annually, or approximately 3.4% of global gross domestic product (GDP).1 Preventing corrosion is clearly an important goal, and paints and coatings play an important role in this never-ending battle.

Coatings applied to metal substrates can have a variety of purposes, including the enhancement of aesthetics such as gloss and color, or various functional purposes such as thermal insulation, sound dampening, or antimicrobial properties.

However, in many cases the most important role of a coating on a metal substrate is protection of the metal surface from the environmental effects that lead to corrosion. Waterborne direct-to-metal (DTM) coatings are just one category of coatings designed to protect metal substrates.

We begin by considering the science behind the corrosion process and the methods by which a coating can prevent corrosion. Then we will examine what is meant by direct-to-metal and how the term “DTM coating” is typically discussed in the industry, followed by a description of one-component (1K) DTM coatings based on acrylic latex polymers, which are the most common type of waterborne DTM coatings. We will also discuss principles of formulating waterborne acrylic DTMs for maximum performance over metal substrates. Finally, we will present a two-part, roundtable Q&A, where industry experts discuss the current trends and technology advances.

THE SCIENCE OF CORROSION

For corrosion to occur, four basic elements of an electrochemical cell must be present, as shown in Figure 1. The first element is a thermodynamically unstable metal (the anode) that will undergo oxidation (i.e., the base metal gives up electrons and is converted to the corresponding metal cations). In Figure 1, the anode is zinc, which oxidizes to form Zn+2 ions. The electrons travel via the second element, a metallic conductive pathway, to an electron acceptor. The cathode is the third necessary element, where the electrons take part in a reduction reaction. 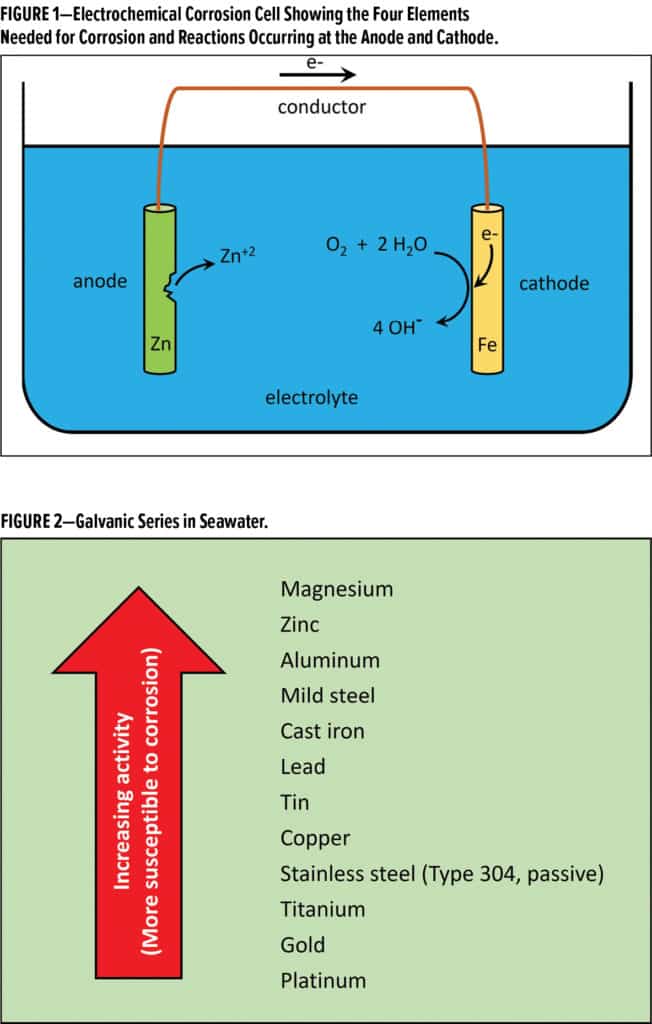 In Figure 1, electrons travel to the iron cathode, where oxygen, water and electrons combine to generate hydroxyl ions. The metal cations formed at the anode, and hydroxyl anions formed at the cathode, need a medium that allows ion movement. That medium, an electrolyte, is the fourth element to complete an electrochemical cell. In its simplest form, an electrolyte is a polar solvent such as water containing some soluble salts. In the presence of an electrolyte, the cations can move towards the cathode and the anions can move towards the anode. Corrosion products, such as zinc hydroxide shown in Figure 1, will form as the two ions form a salt and precipitate from solution.

In the case of dissimilar metals, such as zinc and iron in Figure 1, the galvanic series (shown in Figure 2) dictates which metal acts as the anode and corrodes, and which metal acts as the cathode and is protected from corrosion. Zinc is more active than iron, and when in electrical contact, zinc will act as the anode and will preferentially corrode.

One might ask, “Why does a piece of steel (an iron alloy) corrode if it is by itself and not in contact with another metal?” It will undergo corrosion because it is heterogeneous in nature; that is, there are domains within the steel structure that have slight differences in electrochemical potential. This slight difference is enough to allow one domain within the steel to act as the anode and another to act as the cathode as seen in Figure 3.

Mild or low-carbon steel is a very common material used in manufacturing and construction and corrodes quite readily if not protected. The corrosion products are iron oxides and hydroxides, commonly referred to as rust. Three types of coatings can be used to protect steel and other metals from corrosion—sacrificial, inhibitive, and barrier.2

A sacrificial coating works by making itself the anode and sacrificing itself for the metal substrate. A sacrificial coating is formulated with a high level of metal particles, such as zinc dust, which in the dry film are in electrical contact with each other and the metal substrate. If the metal particles are a more active metal than the substrate, they will act as the anode in a corrosion cell and sacrificially corrode and protect the substrate (i.e., the cathode). When a piece of steel is coated with a zinc-rich primer, the zinc particles sacrificially protect the steel substrate. These types of primers are often used in heavy duty service environments, such as in industrial maintenance applications, and are very effective at protecting steel from corrosion.

An inhibitive coating interferes with the corrosion process by introducing chemical species that interact with the metal surface. Inhibitive primers typically contain pigments that are slightly soluble, and once solubilized in the presence of water, can create a passivating layer that disrupts the electrochemical reactions at the anode or cathode. This type of inorganic pigment is often called a reactive, inhibitive, or anticorrosive pigment, and an example is basic zinc phosphate. Various organic corrosion inhibitors may also be used in formulating metal primers. Primers containing inorganic and organic corrosion inhibitors can be very effective at protecting metals from corrosion, and waterborne, solventborne and high-solids versions based on various resin technologies (e.g., epoxies, alkyds, etc.) are available.

Both sacrificial and inhibitive coatings must be in direct contact with the metal surface to provide effective protection. A barrier coating, on the other hand, can be the first layer in contact with the metal, or can be a subsequent layer on top of a primer. Barrier coatings disrupt the corrosion process by preventing either the fuel for the cathodic reaction (water and oxygen, or other chemicals) or the electrolyte from coming into contact with the substrate. Most coatings provide some barrier properties to a coating system, but their effectiveness will depend on factors that influence permeability to water and electrolyte, such as polymer hydrophobicity and coating porosity.

Continue reading in the July 2022 digital issue of CoatingsTech.

View All Corrosion Control Articles
View All Waterborne Articles
This website uses cookies in order to improve and customize your browsing experience. By continuing, you consent to the use of cookies for analytic and functional purposes, as discussed in the Types of Information Collected section of our Privacy Policy.AcceptRejectPrivacy policy