The State of the U.S. Coatings Industry 2022 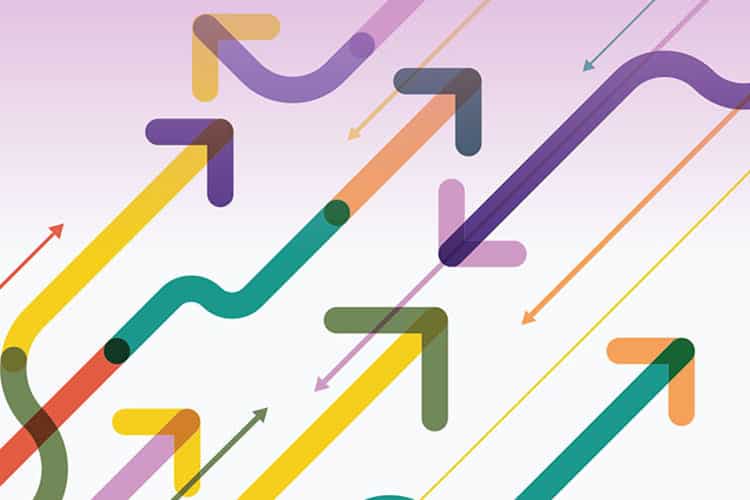 Who would have guessed, in 2019, that it would be 2022 before the coatings industry began to even resemble what it had looked like during that fine, but in no way remarkable, year? Not that 2022 has proven to be in any way a “normal” year, if we are even able to define such a once clear and cogent term. This is still an unsettling year in which raging inflation, nearly unprecedented rate hikes by the Federal Reserve, the Russian aggression against the sovereign State of Ukraine, and an abrupt change in the American vision of China from “trading partner” to “potential enemy” have kept virtually everybody and everything off balance.

Although the industry recovered in 2021 from a small dip in volume in 2020, the real news is the dramatic increase in value, ∼25% over the two-year period, 2020-2022 estimated (2022e), that has resulted from the high cost of crude, ongoing global supply chain issues, shortages, transportation issues/logistics and labor shortages. All have led to galloping inflation that the chairman of the Federal Reserve feels may be peaking in August, although it will probably take one to two years to return to the target rate of 2% per year.1

As we sit here, in mid-2022, most raw material suppliers and coatings producers are faced with a unique situation of historic import: They cannot produce sufficient material to fill all of their orders. Some raw material suppliers quietly admit that they are sold out through the end of 2024, and paint producers are missing one strategic opportunity after another because their R&D colleagues are spending the lion’s share of their time not formulating new products but finding raw material substitutions so that they can produce existing products, for which they are unable to obtain key raw materials, from pigments and resins to additives and containers. Everything is in short supply and difficult to obtain.

Although things do seem to be easing up a bit as of July 2022, the global supply chains are so fragile that almost anything can disrupt the recovery, whether as a result of Europe’s over-reliance on Russian gas and oil, global food shortages caused by the inability of food and other resources to be shipped from Ukraine, another slowdown in China caused by additional outbreaks of COVID-19, ongoing refinery capacity issues in the United States, or any number of other important—albeit less momentous—aspects of the current chaos in which the entire globe is involved.

While it is true that U.S. refineries “are running at about 94% of operable capacity, the highest since September 2019,”2 this is merely a relative, rather than a fully revealing, statistic. In fact, refinery closings due to either lack of demand (in 2020) or damage done by the “Big Freeze” in the Permian Basin (in February 2021) and exacerbated by Hurricane Ida six months later, have caused a reduction in capacity of 5% from 2020 to 2021, and an additional 1% from 2021 to midyear 2022e, as shown in Figure 1. 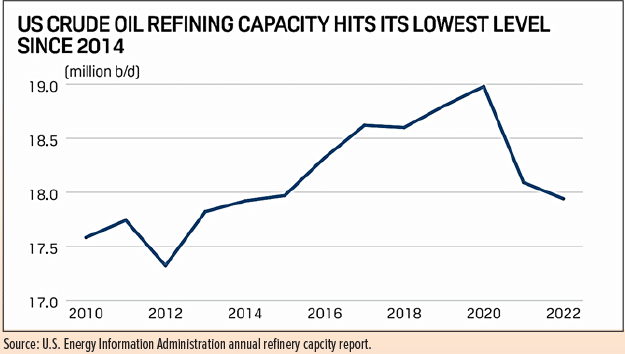 There do not appear, at least as of this writing, to be plans to increase capacity anytime soon, and in April LyondellBasell Industries announced the closing, at the end of 2023, of its 263,776 barrel-per-day (bpd) Houston refinery. Two closed petroleum refineries have been converted to renewable diesel production, and serious consideration is being given to similar conversions in the future.

For the long-term national good, this is, of course, excellent news. In the short term, however, declining crude oil refinery capacity is not good news for the U.S. chemical industry,3 which represents more than $800 billion of the U.S. economy and supports more than 25% of our gross domestic product (GDP), including downstream products for the paints and coatings industry. Many basic raw materials for all types of coatings, whether waterborne or solventborne, 100% solids, powder, or energy-curing systems, are derived from crude oil. We should expect a degree of easing of both supplies and prices of paints and coatings raw materials as we move through the remainder of 2022e and into 2023 forecast (2023f), but only moderate easing.

There will continue to be structural global issues that will mitigate against any scenarios in which “things return to normal,” or even to a semblance of normal, whatever that blissful state may look like. The cold hard truth is that the value of durable goods manufacturing shipments is up 11% in mid-2022e, and that total manufacturing shipments value is up 14.8%, but this dramatic increase in value is almost entirely the result of price increases, not volume of goods, which was only up 1.1%, after adjusting for price.4

The shortages, high prices, allocations, labor issues, and transportation problems that have led to the current paint and coatings industry headaches are not going away anytime soon—but the worst is likely behind us, and for that, we should all be grateful. So, what should the industry expect during 2022?

Continue reading in the August-September 2022 digital issue of CoatingsTech.