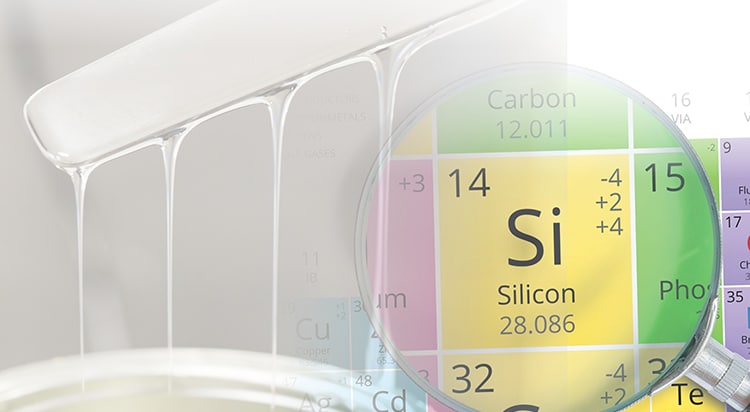 A new silica matting agent has been developed, featuring a mercapto silane-modified surface. Unlike traditional organically modified silicas, which utilize adsorbed waxes on the surface, silane modification offers a new opportunity to introduce reactive functionality into silica additives for coatings. With judicious pairing of surface functionality and resin chemistry, this functionalized surface opens the potential to react with the resin matrix. This paper will highlight this new class of functionalized silica for coatings and outline areas of potential application, with specific emphasis in cobalt (Co)-free alkyd formulations.

Micronized, synthetic, amorphous silicas (SAS) are ubiquitous additives in the coatings marketplace for gloss reduction, rheology modification, and corrosion protection.1 SAS have historically been a choice coating additive due to their high tailorability, ease of dispersion, and compatibility across a wide range of formulations. As a class, SAS are made of three major types of silica: precipitated, gel, and fumed; each provides their own distinct advantages and disadvantages in formulation.2 Of these, precipitated silicas are particularly versatile as they are produced through a neutralization reaction of sodium silicate (water glass) and strong acids (e.g. sulfuric or hydrochloric). Through the modification of precipitation parameters, one can target different surface areas, pore structures, and grind resistance in the resultant silicas. Both surface area and pore structure have implications on binder demand in coatings formulations and will impact overall viscosity. Grind resistance refers to the structural integrity of the particles when energy is applied (i.e. milling).

The surface chemistry of SAS also plays an important role in formulation. While SAS surface chemistry is difficult to modify during synthesis, post-synthetic modification of the surface is traditionally done with the adsorption of wax materials. Importantly, these wax treatments aid in the settling and re-dispersion properties of SAS additives, key factors in formulation stability. Waxes can also impart other properties into the coating ranging from hapticity, mar/burnish resistance, and hydrophobicity.3 While a useful technique for surface modification, it only allows for physisorption of materials, risking disassociation of the surface treatment from SAS after formulation or when the system is subjected to shear.

While untreated and wax-treated SAS dominate the portfolios for coatings-grade additives, PPG has developed a versatile surface treatment methodology. Due to the synthetic conditions used during the precipitation, there is an opportunity to introduce reactive moieties into the batch to covalently modify the silica surface. Using this approach, we are able to introduce reactive triethoxy silanes into the precipitation to perform an in situ covalent surface treatment. In a typical process (Figure 1), a triethoxy silane is introduced to the aqueous mixture of partially neutralized sodium silicate. As the precipitation matrix is typically alkaline in nature, hydrolysis of the silanes is catalyzed to convert the ethoxy moieties to silanols (Figure 1a). In a simultaneous process, the newly de-blocked silanols can undergo condensation with silanols at the silica surface (Figure 1b). With the condensation complete, the remaining processing steps of filtration, drying, and milling can occur to achieve a unique functionalized silica additive. Depending on the solubility of the silane, a secondary “compatibilizing” agent can also be added to aid in dissolution.

For this current development opportunity, we chose to utilize a mercaptosilane as our functionalizing material. Unlike traditional wax treatment, wherein the surface is treated with a non-functional wax, this material is functionalized with reactive thiols. As it pertains to the functional group, thiols offer myriad potential synergies in coatings. Specific areas of interest are formulations that contain unsaturation (i.e., alkyd, UV-curable) and/or isocyanate functionality (i.e., polyurethane, polyurea). This article will focus on applications with alkyds, emphasizing formulations utilizing cobalt-free driers.

Alkyd resins are generally comprised of polyols functionalized with poly-unsaturated fatty acids. These poly-unsaturated units are key to the auto-oxidative cure mechanism that alkyds undergo for film formation.4 Alkyds themselves will undergo this auto-oxidative process under ambient conditions; however, this will occur over a long time frame (>24 h).

To accelerate cure, metal soaps/carboxylates are used to catalyze the auto-oxidation reaction, reducing drying times to less than 8 h. Until recently, the standard drying agents utilized in alkyd formulations were Co-based complexes due to their superior activity. As regulations continue to evolve, many of the Co driers have been identified as potential carcinogens and reprotoxins.5 To that end, formulators have been challenged to find non- or less toxic replacements for long-held industry standard driers. Not surprisingly, many of these driers alone are less active as compared to Co. Blends of various primary and auxiliary driers are necessary to achieve the required drying performance.

As drier chemistry continues to evolve, formulators are challenged in matted systems as driers can adsorb to the matting agent surface and become deactivated, leading to increased dry times. SAS are excellent matting agents, but they also introduce large amounts of surface area into the formulation that can increase the probability of deactivation. Surface-treated SAS are obvious candidates for matting agents in alkyd systems due to their blocked surfaces. Unlike a traditional wax-treated SAS, the silane-treated materials have no chance to lose surface treatment via desorption due to the synthetic pathway and covalent nature of the modification. With the enhanced surface modification, these SAS additives tend to have reduced binder demand and are less prone to indiscriminate adsorption of formulation additives (i.e., drier chemistry). With the introduction of thiol moieties, this also opens the possibility of thiol-ene type reactions to occur during the cure process in alkyd systems. To evaluate our new matting agent, a series of tests focused on dry time, viscosity, gloss reduction, and weathering were conducted to compare silane-treated SAS to the industry standard SAS matting agents.

In cases where coated substrates are used, pine panels are coated to target a dry film thickness of 45-55 mm. Drying time evaluation on wood panels is done directly with a finger test for tackiness. Viscosity is measured using a Haake rotational viscometer equipped with a SV1ST spindle. Gloss is measured directly on wood substrates using a Byk Mirco Tri Glossmeter. The accelerated aging test involved exposure of doubly coated panels to continuous ultraviolet (UV) light radiation (UVA-340 lamp) and condensation in a weathering chamber. Coated panels were exposed to 8 h of illumination dry at 60 °C, followed by 4 h at 50 °C with 100% humidity.

A screening study of various untreated and treated SAS was designed to compare drying times with alternative drier blends. Table 1 lists the generic formulas for the alkyd systems. Aside from our silane-treated SAS, a gel, thermal, wax-treated, and fumed SAS will also be screened in this formulation. 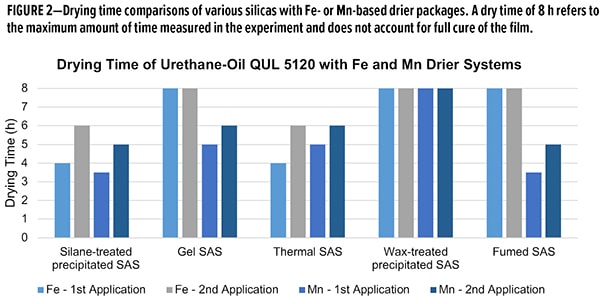 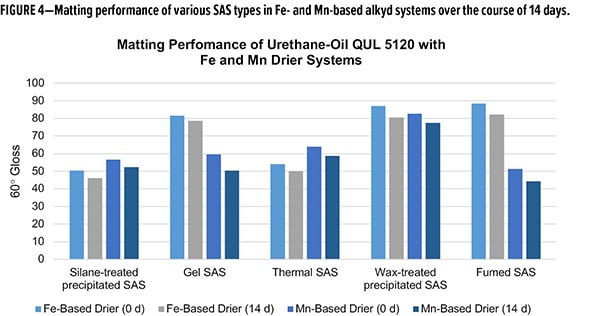 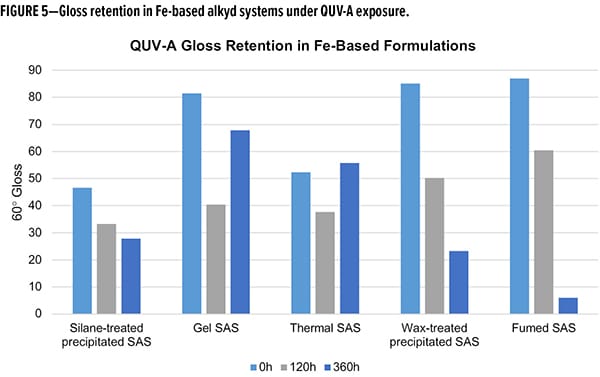 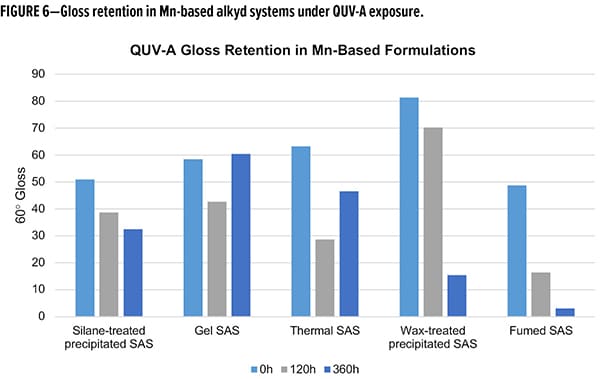 As a final evaluation of performance, accelerated aging tests were completed using a QUV-A accelerated weathering test to evaluate the durability (i.e., gloss retention) as a function of UV-A exposure.6 In the case of Fe-based compositions (Figure 5), the worst-performing materials for gloss retention were wax-treated and fumed SAS. Over the course of 360 h of exposure the two systems retained less than 20% of their initial gloss values, with fumed only retaining 6%. The gel and thermal SAS materials stand out as outliers in this study with considerable gloss reductions from 0 to 120 h, followed by an unusual gloss increase from 120 to 360 h. Using the 120 h data points for limited insight, gel SAS retained 73% while thermal only retained 45%. The silane-treated SAS, which has a gloss retention of 76% at 120 h and 64% over 360 h, demonstrated robust durability to accelerated aging.

Many of the same trends were observed in the Mn-based formulations (Figure 6). Again, both wax-treated and fumed SAS performed poorly with regard to gloss retention, with less than 30% retained in both cases. Again, the gel and thermal SAS had unusual behavior upon extended exposures. Using the 120 h mark as an initial indicator of performance, these show the reverse performance as compared to the Fe-system. Gel SAS has a gloss retention of 50% while thermal maintains 72% of the initial gloss at 120 h QUV-A exposure. Comparable to the Fe-based compositions, the silane-treated SAS in Mn-based compositions retained 60% initial gloss over the full 360 h exposure cycle. Taking the Fe- and Mn-based compositions together and keeping in mind the unusual behavior of the gel and thermal SAS, the silane-treated SAS had better gloss reduction and consistent gloss retention across both formulations. Future studies are planned to further explore the gel and thermal silicas to better understand the cause of the gloss increase with extended exposure.

In summary, we have shown the application of a thiol-containing silane-treated silica as a functional matting agent in alkyd-based coatings. This silane-treated silica has significantly enhanced the properties of a non-Co drier alkyd system. Co-free formulations utilizing this new silane-treated SAS have been enhanced with robust and fast drying times, low viscosity, high matting efficiency, and predictable durability as compared to other industry-standard SAS matting agents. The studies presented here have enabled formulators to extend the use of silane-treated silica matting agents to a variety of other Co-free drier alkyd systems. Work is ongoing to further understand the interactive mechanisms of this differentiated coatings additive in resin matrices. Outside alkyd formulations, additional studies are underway to explore advantages in other unsaturated systems (e.g., UV-cure formulations) and will be disclosed in a future report.

The alkyd resin (QUL 5120), starting point formulations, and testing data were all generously provided by Stefan Bomballa of Synthopol. His work and insight were greatly appreciated in the development of this material.