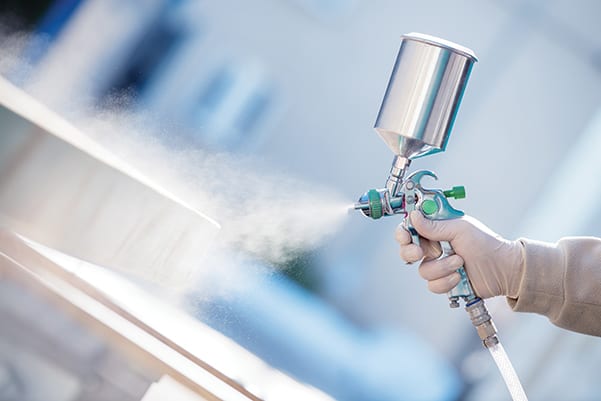 I recently was asked about the optimum viscosity for spraying paint. I thought that I would extend my answer to other application methods and share the information.

There is a rule of thumb in the paint industry that a viscosity of approximately 100 cps (1 P, 0.1 Pa•s) provides acceptable spraying, brushing, or roll coating. However, that viscosity is not measured under just any set of conditions or done with just any viscometer. All aspects of paint flow, including stirring, pumping, transferring, sagging, and application involve shearing actions. Shearing can be envisaged in terms of placing a small amount of liquid in the palm of your hand and smearing it by passing your other hand over the first one. With spraying and brushing, a high shearing stress is applied to the paint. This also is true of reverse roll coating. Direct roll coating is thought of as a low shear process (the application roller often just kisses the  substrate), but the doctor blade and pre-application rollers may apply high shearing stresses.

Shearing of paint breaks up its structure and the viscosity drops to a lower level (often much lower) than the paint had at rest. This is called shear thinning, and the rate of deformation of the paint as it is sheared is called the shear rate (units are reciprocal seconds, s-1). Although the key parameter affecting viscosity is the shear stress, people in the paint industry historically have looked at viscosity as a function of shear rate. One reason for this is that rotational viscometers often display shear rate values as speed changes or it is easy to calculate shear rate from the viscometer speed. Paint application is a high shear stress, high shear rate process. Depending on the gun, settings, etc. air spray gives shear rates of 1,000 to 40,000 s-1. Brushing involves similar shear rates.

Airless spray has a higher range of 10,000 to perhaps a million s-1. Reverse roll coating can give shear rates over 100,000 s-1, and the paint in direct roll coating probably sees shear rates of at least a few thousand s-1.

Different viscometers measure viscosity at different shear rate ranges. The Stormer instrument (see ASTM D562) often used to test architectural and maintenance paints operates at a low shear rate of about 60 s-1, which works well to test stirrability, but not sprayability or brushability. A conventional spindle-type rotational viscometer does not give shear rates much above 100 s-1, so it is not of use either. I highly recommend high shear cone/plate viscometers (ASTM D4287) that can apply a shear rate of 12,000 s-1 (10,000 s-1 where 50 Hz power is used). I have had many useful results with the old ICI cone/plate and the more recent Brookfield Cap 1000 and 2000 instruments to test ease of application. Special viscometers and sensors are available that enable measurements up to about 100,000 s-1 comparable to airless spray and reverse roll coating. However, my experience tells me that they are not necessary because the viscosities of nearly all paints flatten out at considerably lower shear rates. The automotive industry has used No. 4 Ford cups (shear rate around 400-500 s-1, ASTM D1200) to check sprayability for many years, but some companies have changed to modified cone/plate viscometers that measure at 500 s-1 (ASTM D7395).

Let’s get back to optimum high shear viscosities for application. Earlier, I said 100 cps was a good target. I have worked with paints that were sprayable at viscosities as low as 50 cps and as high as 500 cps. The low end is likely to cause turbulence (bad for spray guns and nozzles), fine overspray and, possibly, contribute to sagging. The upper end tends to give poor atomization, possibly gun spits or cobwebs, and unacceptable appearance. Viscosity affects ease of brushing, coverage, and tends to spatter of architectural paints. I once worked on a hiding problem that turned out to be due to the paint being so easy to brush that painters applied very thin coats. The high shear viscosity was only about 70 cps. Raising it solved the problem. If the viscosity is much above 100 cps, the brush drag will be so high that the painter will end up with a sore wrist and will not buy your paint again. I do not recall the ranges for roll coating, but viscosity much below 100 cps is likely to cause misting, and high viscosity probably will give ropiness and other unwanted surface patterns.

What if you are a paint user and do not have a high shear viscometer? I have been in paint shops where they diluted a portion of paint until they liked the spray pattern and used that reduction with the rest of the drum or tote. Many sprayers and roll coaters reduce to a certain cup viscosity based on experience of what sprays or roll coats well for that product or color. Architectural paint formulation labs often had a designated painter to test brushability or called in a professional painter to test new products.