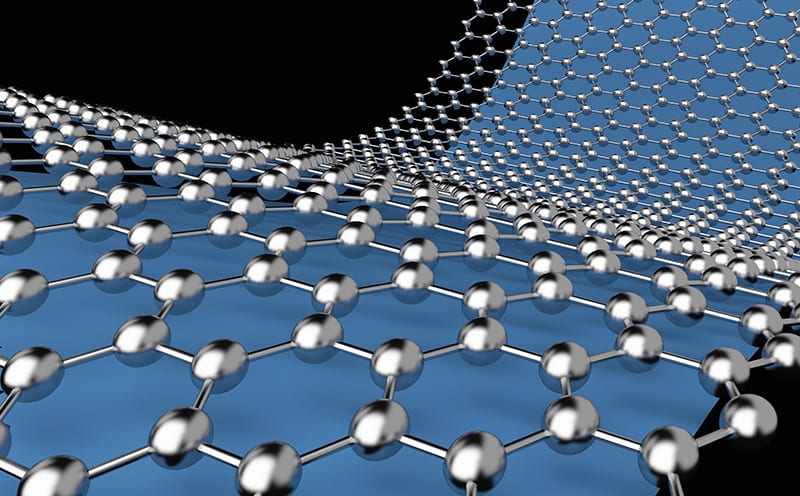 Since it was first isolated in 2004 via simple mechanical exfoliation of graphite, graphene has attracted significant attention due to its unique combination of extraordinary electronic, optical, and mechanical properties. Graphene sheets are two-dimensional, one-atom-thick layers of sp2-bonded carbon atoms connected in a hexagonal, honey-comb-like pattern. In addition to potential applications in advanced batteries and transistors, solar cells, displays, sensors, and composites, there is much interest in the use of graphene by itself as a coating material or as an additive for improving the performance of various coating technologies. In particular, several approaches have been taken to develop graphene-based corrosion protection coatings. The superhydrophobicity of graphene has also been exploited. There are many possible applications for conductive graphene coatings. A few selected examples of recent research on graphene coatings are highlighted.

Graphene coatings can be hydrophobic, conductive, and/or chemically resistant, and therefore have huge market potential, according to Elcora Resources Corporation, a partial owner of the Ragadera graphite mine in Sri Lanka that is working to increase the production of graphite and identify a suitable process for the commercial production of graphene. The company anticipates that hydrophobic graphene coatings will find applications where water-repellant surfaces are required, such as ship hulls, pot/pan liners, glass surfaces (mirrors, windows, windshields) and textiles. Conductive graphene coatings will, according to Elcora, find use in cellphones, tablets, computers, television screens, and other displays. Graphene coatings can also serve as protective coatings with superior chemical, moisture, corrosion, UV, and fire-resistance properties. On medical devices, these coatings would provide a biocompatible surface that is resistant to degradation. There are, in fact, potential applications for graphene coatings in nearly every industrial sector, from aerospace to personal care. Some specific examples include: more efficient and flexible solar cells, nano-electronic devices, supercapacitors, high-sensitivity gas sensors, molecular separation, and medical implants.

Conductive graphene coatings will, according to Elcora,
find use in cellphones, tablets, computers,
television screens, and other displays.

With so many commercial opportunities in the coatings area alone, it is somewhat surprising that numerous products have not yet reached the market. The answer is simple—a practical, cost-effective, commercial-scale method for the production of graphene has not yet been developed. Currently, graphene is produced in very small quantities at very high prices ($50 to $10,000 per gram, according to Elcora). However, the company predicts that significant advances in production technology are being made due to a shift in focus from application development to supply. It expects that processes that enable the production of 100 kg of graphene per year will be implemented within the next 12 months. Assuming the commercialization of graphene-based coatings can be realized in 18–24 months. Elcora expects to see products on the market in late 2017 or early 2018. Full market penetration will then follow within the next five to 10 years, with the value of the graphene coating market eventually reaching $12 billion annually.

As noted, the scope of research into graphene coatings is extremely diversified and encompasses a wide range of both performance properties and potential applications. Many recent studies have focused on the development of pure graphene or polymer/graphene composite coatings for protection against corrosion and other damage. Some recent results are noted below.

Researchers at Deakin University in Australia demonstrated that graphene flakes grown directly on micron-sized fibers of austenitic stainless steel as representatives of porous metal structures used in applications such as filtration membranes, heat dissipation systems, biomedical scaffolds, and sensors, formed a barrier consisting of three-dimensional networks of the nanoflakes that provided protection against corrosion.1 The performance was attributed to the hydrophobicity of graphene for improved water repellency and graphene’s unique electrical properties, which reduced the occurrence of redox reactions on the surface. The thickness of the graphene coating was adjusted by varying the temperature and feed gas flow rate during deposition. Both simple coatings comprising a few atomic layers and more complex coatings with interconnected 2–4-μm-long nanopillars were synthesized and investigated. The latter coatings exhibited massively enhanced specific surface areas, superhydrophobicity, and the highest corrosion resistance to synthetic seawater. The authors believe the new coating technology could be applicable to the development of novel thermal exchangers, separation systems, and adsorption and biocompatible materials.

Meanwhile, scientists at Massachusetts Institute of Technology recently reported that ultrathin, scalable, chemical-vapor-deposited (CVD) graphene coatings have higher chemical resistance than typical functional hydrophobic coatings and promote dropwise rather than filmwise condensation on copper condenser tubes used in heat transfer systems.2  Heat transfer was improved by a factor of four compared to that of a conventional monolayer hydrophobic polymer coating in pure water vapor at 100°C, and the graphene coating was found to be significantly more robust to chemical resistance and offered a lower thermal resistance. In fact, the graphene coating showed no signs of measurable degradation over a two-week period, while the polymer coating began to degrade within three hours and completely failed within 12 hours. The researchers also calculated that, using data from the Electric Power Research Institute, the improved condenser heat transfer could result in a 2–3% improvement in the efficiency of power plants, which equates to savings of dollars per power plant.

Graphene coatings have also been shown to provide greater protection against microbial-induced corrosion than typical polymer coatings. Researchers at Rensselaer Polytechnic Institute, the South Dakota School of Mines and Technology, Oklahoma State University, and Shenyang National Lab for Materials Science demonstrated that graphene coatings protect metallic surfaces from corrosion under harsh microbial conditions more effectively than standard parylene-C (PA) and polyurethane (PU) protective coatings.3 Specifically, nickel dissolution in a corrosion cell with graphene-coated Ni electrodes was an order of magnitude lower than that of PA- and PU-coated electrodes, even though the graphene coating was approximately 25 and 4000 times thinner than the commercial PA and PU coatings, respectively. The results are attributed to the resistance of graphene to microbial attack and the fact that the graphene coating was highly conformal and defect-free. As a next step, the scientists will investigate the performance of graphene coatings on other metals and on the large, flat sheets of metal used in the construction industry under aggressive atmospheric conditions.

One of the challenges with developing commercial-scale graphene coatings has been the development of methods for the fabrication of large-area, defect-free graphene films suitable for industrial use. Researchers at the University of Manchester have tackled this problem by first applying graphene oxide laminates and then chemically reducing them to graphene using hydroiodic and ascorbic acids.4 The treatment results in a high degree of graphitization of the laminates with little structural damage, and the resultant films are highly impermeable to gases, liquids, and aggressive chemicals, including hydrofluoric acid.

Coating formulators have long used inorganic fillers to modify the properties of polymeric coatings, Nanoscale fillers have been in use for decades, and largely consist of layered clays, carbon nanotubes and derivatives, and spherical nanoparticles, most commonly silicon dioxide (SiO2). However, most inorganic fillers exhibit poor compatibility with organic polymer resins, and thus the surfaces of the fillers must often be modified to improve filler/matrix interactions. Graphene is attractive as a nanoscale filler because it is a carbon-based material that has improved interactions with organic polymers. Thus, graphene nanosheets and nanoplates and graphene oxide have been investigated as fillers for various types of coatings.

Applied Graphene Materials (AGM), funded through listing on the UK’s AIM stock market, has already developed scalable production technology for a range of graphene nanoplatelets (A-GNPs), but uniquely through a continuous synthesis process. To support their focus on developing industry-ready graphene dispersions, AGM has collaborated with the UK’s Paint Research Association to test modified polyurethane and epoxy coatings. Initial results, based on small additions of A-GNP10 nanoplatelets, have indicated improvements in mechanical properties such as scratch resistance but with stand-out gains in reducing moisture vapor transmission rates and anticorrosion performance. AGM reports improvements in excess of 300% in time to failure during cyclical salt spray testing.

Researchers at Chung-Yuan Christian University in Taiwan developed electroactive polyimide (EPI)/graphene nanocomposite (EPGN) coatings via thermal imidization and demonstrated that these coatings provided two-fold protection against the corrosion of cold-rolled steel (CRS) electrodes compared to that of a neat EPI coating.5 The enhanced corrosion protection performance of the EPGN coating was attributed to the redox catalytic capabilities of amino-capped aniline trimer (ACAT) units existing in the EPGN, which were thought to induce the formation of passive metal oxide layers on the CRS electrode. In addition, the carboxyl-graphene nanosheets embedded in the EPGN matrix increased the tortuosity of the diffusion pathway for O2 molecules, thus functioning as a gas barrier and significantly hindering oxygen migration.

Graphene is attractive as a nanoscale filler because
it is a carbon-based material that has improved
interactions with organic polymers.

Corrosion protection is a key issue in the aerospace industry, where lightweighting has become crucial. Graphene coatings have attracted interest because they have the potential to provide corrosion protection even when applied in thicknesses of a few nanometers. The conductive properties of graphene are an added benefit in these applications. Graphene nanofillers are also very attractive because they can dramatically improve the properties of coatings at very low loadings. Researchers at the University of Naples Federico II in Italy therefore investigated the influence of graphene nanofillers on the performance of water-based epoxy protective coatings applied to the aluminum aircraft alloy Al 2024-T3.6 Coatings containing minor amounts of graphene nanoflakes exhibited improved corrosion protection performance through enhancement of the barrier properties and water contact angle with no impact on the curing process or adhesion properties.

View All Functional Coatings Articles
This website uses cookies in order to improve and customize your browsing experience. By continuing, you consent to the use of cookies for analytic and functional purposes, as discussed in the Types of Information Collected section of our Privacy Policy.AcceptRejectPrivacy policy