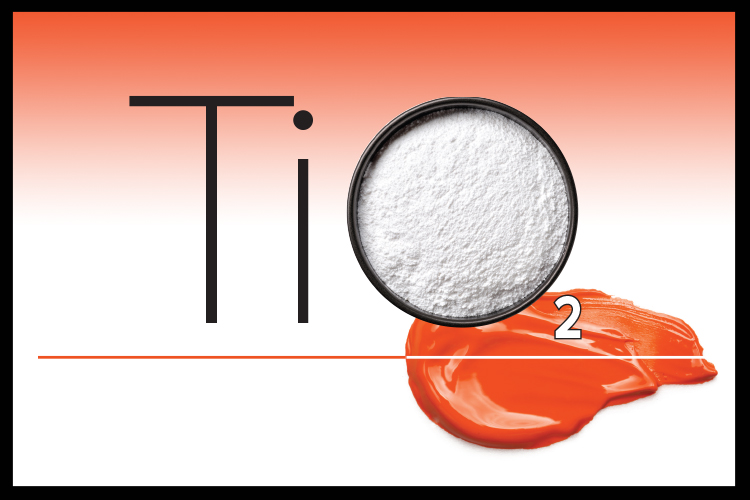 In addition to opacity, the structure, surface treatment, and grade of titanium dioxide pigments are valued in architectural coatings, as described in ASTM D476.

Titanium dioxide in waterborne paints is used in architectural paints, on wood, and on metal and other substrates. Thanks to its very high opacity, it has replaced zinc oxide and barium sulphate in many applications.

In architectural paints, titanium dioxide is usually incorporated into wall and ceiling paints, along with other fillers, in the form of slurries and is combined with other raw materials. The slurries for waterborne paints for walls and ceilings are prepared by dispersing the primary particles at a high speed with a Cowles dissolver equipped with a serrated disc.

The appropriate selection of surfactants and grinding aids helps separate the primary particles so the degree of dispersion is sufficient to obtain paints with a semigloss or gloss above 60% at 60°. This is usually because latex paint formulations for walls are prepared by dispersing the primary particles with other fillers, such as calcium carbonate, nepheline syenite, and quartz, which act as an additional grinding medium for the titanium dioxide particles. This result occurs even when the paint production process consists of adding separate slurries from each type of filler in the let-down process and mixing them with a binder and thickeners in an increased viscosity of suspension.

Many types of titanium dioxide cannot be used in high-gloss waterborne paints without grinding the particles in a bead mill. In some cases, paint producers do not have bead mills in their machine park, so they produce high-gloss paints by using a Cowles dissolver. It is very important that the formulator of the recipe select the appropriate type of titanium dioxide for grinding in a Cowles dissolver, ensuring proper dispersibility and obtaining the highest possible gloss level. The selection should be based on data from research and case studies prepared in various devices to ensure grinding to a level that maximizes gloss in paints with low PVC. It is also very important to note the type of titanium dioxide used to produce the level of gloss that was achieved with the resulting coating, along with the related characteristics of hiding power, gloss retention, durability of the coating against solar radiation and weather conditions.

Data from these standards can often be found in the technical materials of manufacturers of titanium dioxide pigments. These classifications include a list of different groups of anatase and rutile pigments, which are divided according to the TiO2 content and other pigment parameters; in the case of ASTM D476, they are also divided in terms of use in paints with a diverse range of PVC and paint types in terms of gloss, durability of the coating, etc.

Continue reading in the October 2022 digital issue of CoatingsTech.