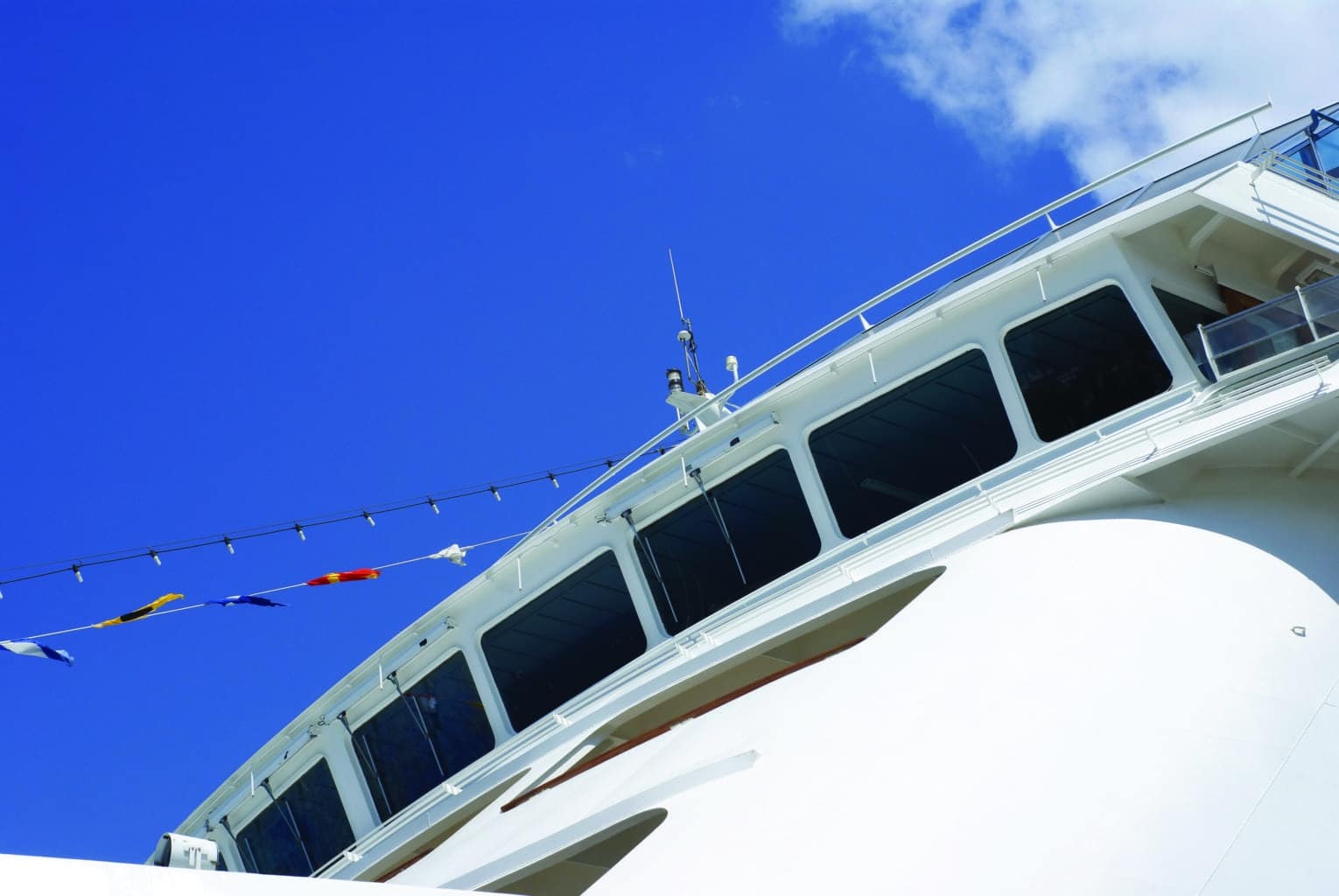 To take nondestructive testing (NDT) measurements at height, equipment such as aerial lifts, scaffolding, ladders, or other solutions are required to reach areas on ships, bridges, aboveground storage tanks, flare stacks, and other infrastructure and industrial sites. This is both dangerous, due to the possibility of falls, and time consuming. In certain instances, it may also require taking an asset, such as a flare stack, offline so it can be accessed to take NDT readings. Handheld digital testing devices are traditionally used to perform NDT inspections of material surfaces, with the inspector physically accessing all test sites to obtain a measurement. 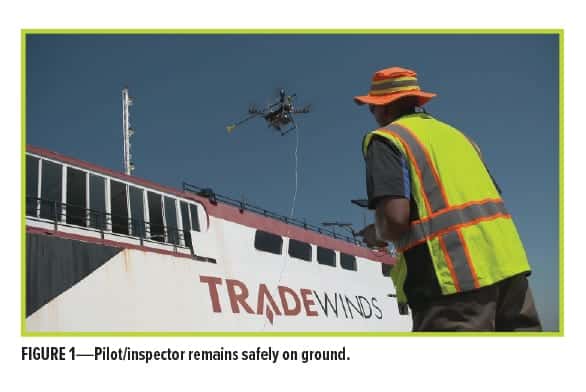 Utilizing an aerial robotics platform for contact-based NDT measurements such as dry film thickness (DFT), surface profile (SP), or ultrasonic testing (UT) allows workers to remain safely on the ground while the device performs measurements at elevation. Figure 1 demonstrates how the pilot/inspector remains at ground level, while the aircraft approaches a ship for DFT measurements. In addition to being safer, the aerial robotic NDT measurement process can be faster due to the job no longer requiring access equipment and the manual intensity of a human measuring every inspection area.

The use of an aerial robotics platform is a novel application utilizing existing NDT devices and available drone technologies equipped with a system of complex integrations; custom sensor arrays, printed circuit boards (PCB) and software, that allows for a better application of science. The system has the potential to improve the inspection, testing, and data collection aspects of assets by making the NDT measurement process easier and safer. This allows for more frequent measurements and/or a larger quantity of measurement samples at a more efficient rate.

With an easier, faster, and safer method to collect NDT measurements from locations of height, we can expand the science of nondestructive testing by collecting data from locations where data was either inaccessible or difficult to obtain due to access issues, safety considerations, or other limitations. The patented aerial robotic system discussed in this article flies up to a structure, then under full autonomous software control, touches an NDT measurement probe (such as a DFT, SP, UT, etc.) to the target and records the measurement data compliant with SSPC, IMO PSPC, ISO, ASTM, API, or other standards. The goal of this article is to make readers aware of this new technology, specifically through DFT testing, as well as to provide information as to its efficacy, limitations, and operational requirements. 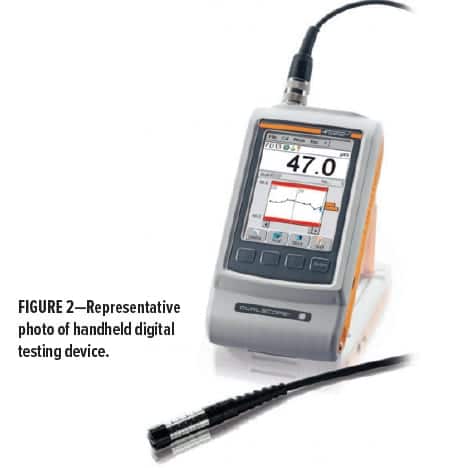 Nondestructive testing of coating is critical for evaluating coating quality and maximizing coating performance. Dry film thickness (DFT) devices are used to nondestructively measure the thickness of a nonmagnetic coating on a substrate. Prior to the introduction of Type 2 electronic DFT devices, the industry primarily relied on Type 1 DFT instruments, such as magnetic pull-off DFT gauges. Magnetic pull-off gauges work by placing a handheld device on a cured coated surface with a ferrous substrate, and slowly rotating a dial on the device until the magnet attached to the dial pops. The DFT reading is identified by interpreting the position of a needle. This method is slow, burdensome, and requires stabilization and dexterity by the user. The development and adoption of more advanced devices by the industry, such as the Type 2 DFT electronic instrument pictured in Figure 2, has increased the inspector’s ability to produce quicker and easier results. Type 2 DFT instruments electronically display readings after the user places the probe on the material surface, thus eliminating some of the manual requirements associated with Type 1 devices. Type 2 gauges utilize the magnetic induction, hall-effect, and/or eddy current measurement principles in conjunction with electronic microprocessors to produce a thickness measurement of the coating. The operating parameters reported by NACE International Coating Inspector Training Program describe thickness reading tolerances of ±1% and ±3% with a resolution of 2 mm (0.1 mils).

SSPC-PA 2 (a common standard for dictating a number of DFT measurements) calls for 45 single instrument readings for the first 100 m2 of a surface, and 15 single instrument readings for each additional 100 m2 areas. This can add up to an enormous number of measurements when large surface areas are coated. Even with a Type 2 DFT device, traditional measurement techniques are manually intensive, requiring workers to physically access a large number of individual measurement areas. These measurement sites often require access to elevated areas via equipment such as ladders, scaffolding, lifts, rope work, and more while employing personal fall protection safety measures. While NDT inspection programs dramatically increase the integrity of infrastructure, working at height creates a safety risk to the worker performing the inspection. The access requirements also add significant time and cost to inspection projects.

Regulatory View on Working at Heights

The United States Occupational Safety and Health Administration (OSHA) maintains safety regulations that cover, among other things, working at height. Similarly, the American National Standards Institute (ANSI) also has Fall Hazard standards. Both offer a worker protection hierarchy, and both apply to the potential hazards of “manual” measurements at heights for NDT testing with handheld digital testing devices.

OSHA maintains that the hierarchy of fall protection starts with completely eliminating the hazards and risks of falling by engineering them out and away from the workplace.1 If that is not a reasonable possibility, then preventing falls from happening is to be considered next. And if that is also not a suitable solution, implementing a fall protection program and a rescue plan is a must. The ANSI worker protection hierarchy detailed in the ANSI Z359.2 standard “Minimum Requirements for a Comprehensive Managed Fall Protection Program” strictly applies to people who need to use fall protection equipment in the workplace, The ANSI worker protection hierarchy starts with the elimination or substitution of jobs at height.2

A “robotic arm” as described in the NASA.gov online dictionary is a type of mechanical arm (usually programmable) designed for grabbing, holding, and moving objects. Robotic arms can be equipped with what is known as an “end effector.” The end effector is located at the end of the robotic arm and is the component that physically interacts with the environment. End effectors are not limited to specific functions and can be used in many applications based on the targeted goals of the user.

The “Aerial Robotic” measurement system presented in this article includes a robotic arm with an end effector. The system uses computer controlled heavy-lift multi-rotor drones outfitted with various sensors and functions to allow precisely controlled flight close to structures. Manual control of such systems is unable to accomplish the precise flying and maneuvers required, thus software-controlled flight is crucial. These aerial robots utilize the existing electronic DFT gauges and probes to perform NDT measurements. The NDT measurement electronic systems are identical to those used for “manual” measurements, i.e., the handheld digital testing devices.

The Aerial Robotics Platform contains onboard NDT measurement electronics from a leading manufacturer and streams the DFT readings and data in real time to the user interface on the base station computer or tablet, and, in addition, saves a copy of the full data in the onboard computer and/or in the cloud. This innovation was named a 2017 Corrosion Innovation of the year by NACE.

Future iterations of the Aerial Robotics system are scheduled to include the ability to conduct statistically valid random samples of a predefined surface area and automated sampling consistent with various measurement standards. 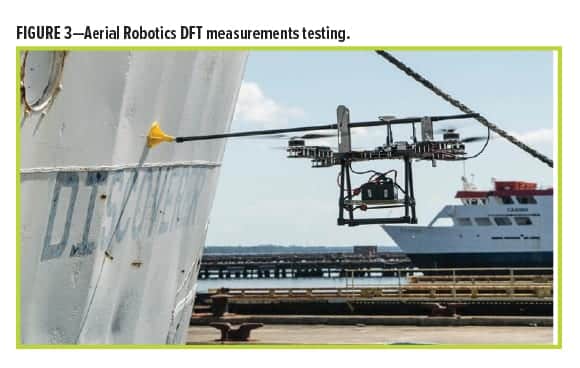 The Aerial Robotics DFT measurement system is visually depicted performing a measurement in Figure 3, and works as follows:

The operator is able to see, in real time, the DFT readings data and whether they are in compliance with the pre-programmed standards. Figure 4 depicts the user interface the operator would see during data collection. After landing, the operator has the option to download the full data record, which in addition to all the DFT readings, includes additional information such as locational coordinate data, weather, and environmental data, etc. 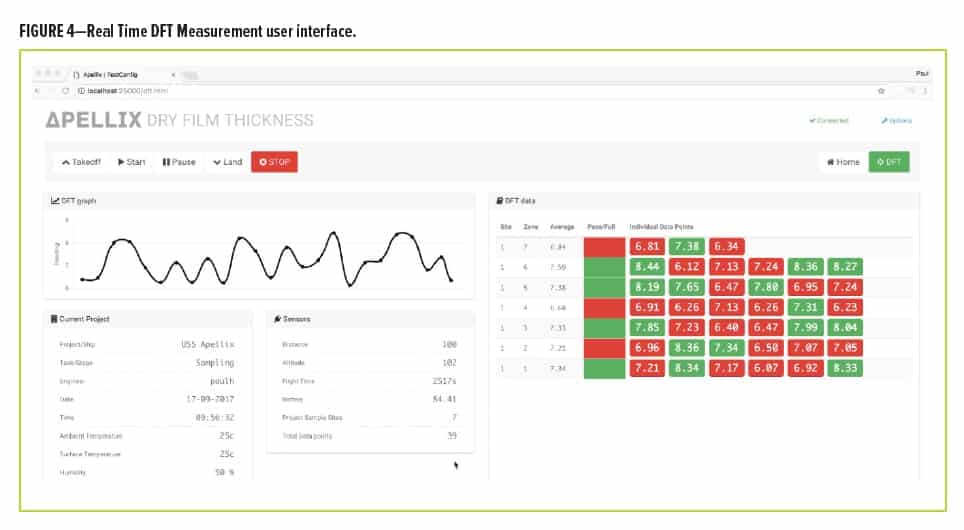 Efficacy of the Data Collected by an ‘Aerial Robotic’ Measurement System

One author of this article recently published a study 4 testing the efficacy of aerial robotic systems for taking DFT measurements at height consistent with SSPC-PA2 standards. The Society for Protective Coatings (SSPC) promulgates standards for NDT measurements including commonly used standards for paint thickness measurements (DFT). Examples of other standards for DFT include ISO 19840, ASTM D7091, and IMO PSPC. 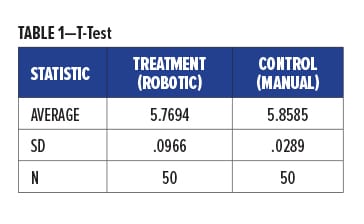 The conclusion of the study found no statistically significant differences in the measurements. As stated in the conclusion, “One would expect there to be little difference between the value of the readings with the robotic system vs a person holding an electronic DFT measurement device and the statistical proof agreed.” 4

Using handheld digital testing devices to take nondestructive testing measurements, such as DFT, at height can be dangerous and time consuming. When possible, working at heights should be eliminated as part of the hierarchy of fall protection stipulated by both OSHA and ANSI. There are a few drone companies and at least one aerial robotics company that take contact-based NDT measure-
ments at height. An aerial robotics system includes a “robotic arm” and an “end effector” allowing for software control as opposed to drone-based systems that are manually flown. The system described in this article operates under full computer control (no manual input required) to fly in and touch the material surface with the probe to perform NDT measurements. A previous study has shown there is no statistically significant differences in the measurements taken manually or by the robotic system.

Performing coating inspection measurements, such as DFT, using aerial robotic systems seeks to improve occupational safety and reduce injuries and deaths attributed to falls by allowing measurements to be taken with the worker safely on the ground. Using aerial robotics to perform contact-based inspections at height is a novel approach that has potential to be integrated into standard operations at industrial facilities.

Presented at the American Coatings CONFERENCE, April 9–11, in Indianapolis, IN.