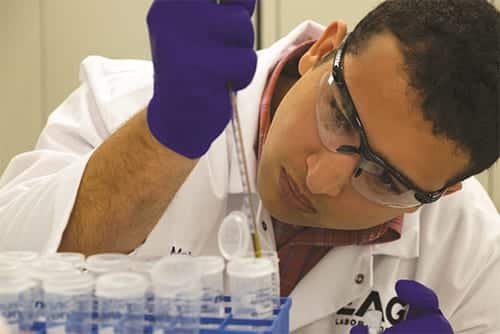 Gas chromatography/mass spectrometry (GC/MS) is an analytical technique for the identification and quantitation of a wide variety of volatile and/or semivolatile organic compounds in a mixture. This technique is an indispensable tool for analytical laboratories and may be used in a versatile manner to accommodate an assortment of sample types. Such versatility has led to the development of a technique called pyrolysis GC/MS.

Pyrolysis GC/MS has been utilized for paints and coatings for many years. During that time, numerous advances have been made in sample introduction, separation, and analysis. This article briefly reviews some of the basic theories behind the analysis as well as the instrument’s strengths and limitations.

This article highlights a step-by-step pyrolysis GC/MS analysis and interpretation of three coating samples focusing on architectural and/or automotive coatings. The samples are analyzed and the data is discussed in a step-by-step process describing what is observed, what information can be garnered from the data, and some potential uses of that information.

EAG Laboratories is commonly asked to identify the composition of an existing paint or coating product for the purposes of developing a competitive product. Although a skilled formulation scientist will frequently have a reasonable idea for a starting point, information on the actual chemical composition of the competitive coating is extremely helpful for formulation applications, patent purposes, etc.

Additionally, a coating formulation scientist can face the challenge of replacing a raw material when an existing material goes out of production, supplier dependability issues arise, or the material is otherwise unavailable.

In the most general case, a typical paint or coating formulation consists of the following:

A typical analytical approach for this would involve a gas chromatography/mass spectrometry (GC/MS) analysis of a dilution or extraction of the paint, a Fourier transform infrared (FTIR) spectrum of the actual cured paint material, and a digestion followed by ICP (inductively coupled plasma) analysis. The GC/MS would identify small semivolatile molecules and residual solvent. FTIR would allow for a general classification of the predominant resin species, and ICP would give quantitative information about the metallic elements present in the coating. The presence of metallic elements could cause the coatings to cure at an accelerated or uneven rate. Having the information on the metals would allow the formulator to make the appropriate adjustments for the optimal cure.

However, this basic approach does not give detailed information about the composition of the polymeric component. Polymers, especially crosslinked polymers frequently found in paints, will not be detected in the soluble extract analyzed by GC/MS. FTIR will only allow for a broad categorization of the polymer or resin type (e.g., polyurethanes, acrylics, epoxies, polyester, etc.). ICP will typically give no information on the nature of the polymers or resins present.

Pyrolysis GC/MS allows for a detailed analysis of the resin components present in a paint or coating formulation. It does not require that the resin be soluble in a solvent. Therefore, crosslinked polymers can be easily analyzed. Sample size is on the order of 100 to 200 micrograms, so it may be conducted on very small sample sizes. It is a more sensitive technique than FTIR. Minor components that would elude identification by FTIR can be identified in a pyrolysis
GC/MS analysis.

Gas chromatography is a technique where a sample is separated into individual chemical components by its relative volatility in the gas phase. The compounds are normally introduced as a liquid solution. The solution is volatilized at 200–300°C in the injector. The compounds typically travel through a capillary column with a non-volatile film. More volatile components are eluted and detected first, while less volatile components are detected later. This order may be modified by the choice of column film materials. The GC/MS technique is only suitable for materials that are stable and volatile enough to travel through the column. The temperature of the column is typically ramped from a low temperature (40–80°C) to a high temperature (250–350°C) over the course of 30 minutes to an hour.

Gas chromatography allows for a complex mixture of volatile components to be separated and later identified and/or quantitated by a variety of detectors and techniques. The results of gas chromatography are typically plotted as signal (y-axis) versus retention time (x-axis). The retention time can be used as an identifying characteristic of a particular compound. An example is shown in Figure 1. 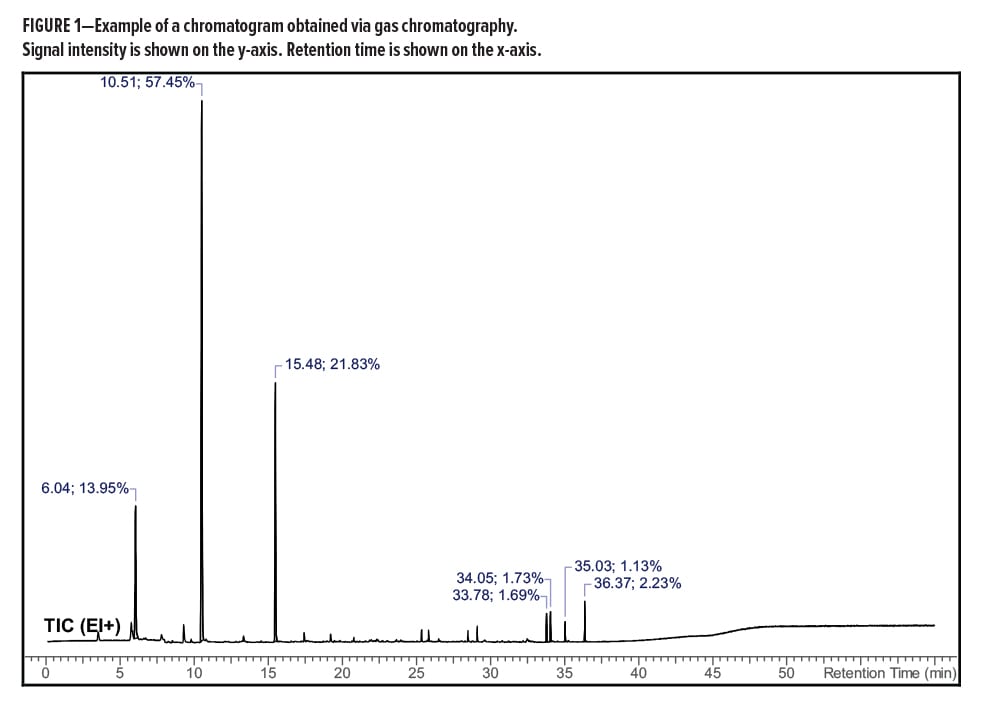 After separation by gas chromatography, the separated compounds are frequently routed into a mass spectrometer for a more detailed analysis. Commonly, the compounds are ionized and fragmented by electrons with 70 Kilo electron volts of energy. This creates a pattern of ions that is detected by the mass spectrometer. This pattern of ions frequently allows for a definitive identification of the compound. Spectral libraries exist to aid in the identification of unknown compounds. Signal intensity is plotted on the y-axis. Mass-to-charge ratio is plotted on the x-axis. An example mass spectrum is found in Figure 2. 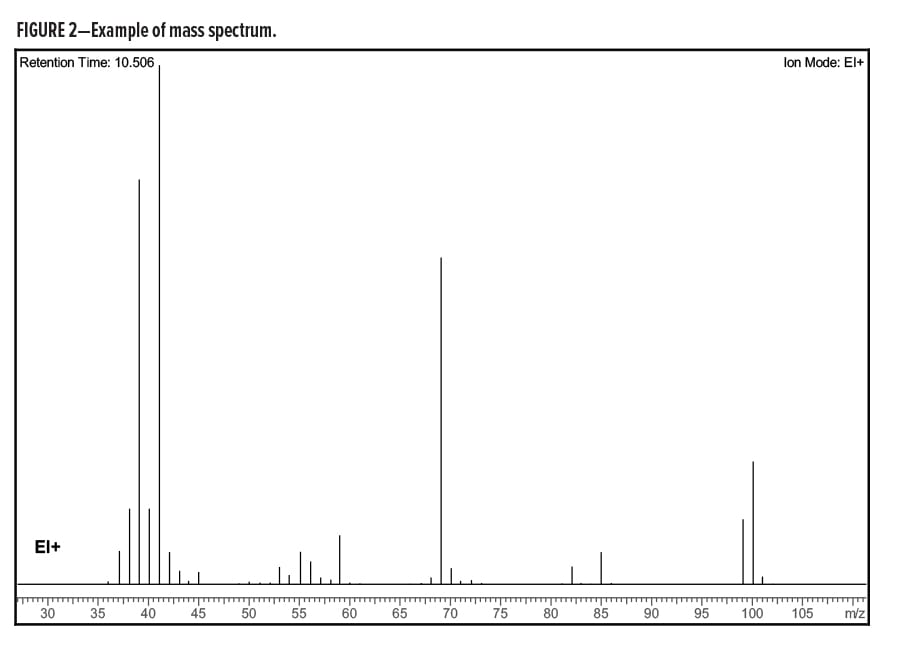 The combination of a gas chromatography system coupled to a mass spectrometer in this way is known as a GC/MS system.

Exposure to high temperature conditions (typically 300–800°C) will cause most polymers to thermally degrade into smaller fragments. Many of these smaller fragments can be analyzed by GC/MS analysis. The pieces that are generated in this way are termed pyrolysis products. The pattern of pyrolysis products can be analyzed to determine the original polymeric materials present in the polymer. Increasing the sample suddenly to a high temperature (such as 600°C) gives much more reproducible numbers than a gradual temperature increase over time. However, temperature ramps can be used if the purpose of the pyrolysis study is to investigate the decomposition products formed. This can be useful to identify potential hazardous compounds that could be generated if the material is burned or overheated.

Virtually all current analytical pyrolysis instruments allow for the direct analysis of solid materials. Therefore, solubility in a carrier solvent is not required. 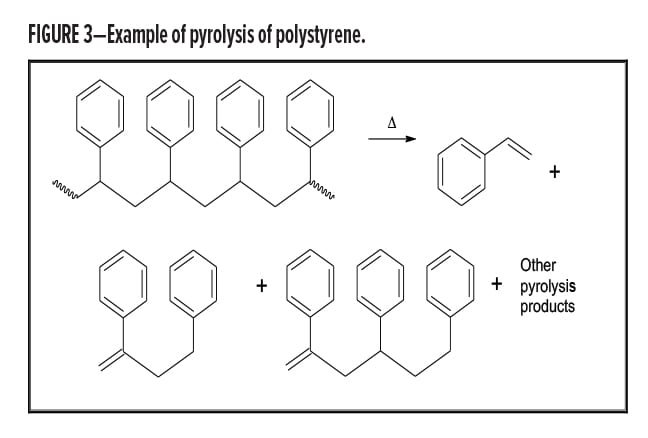 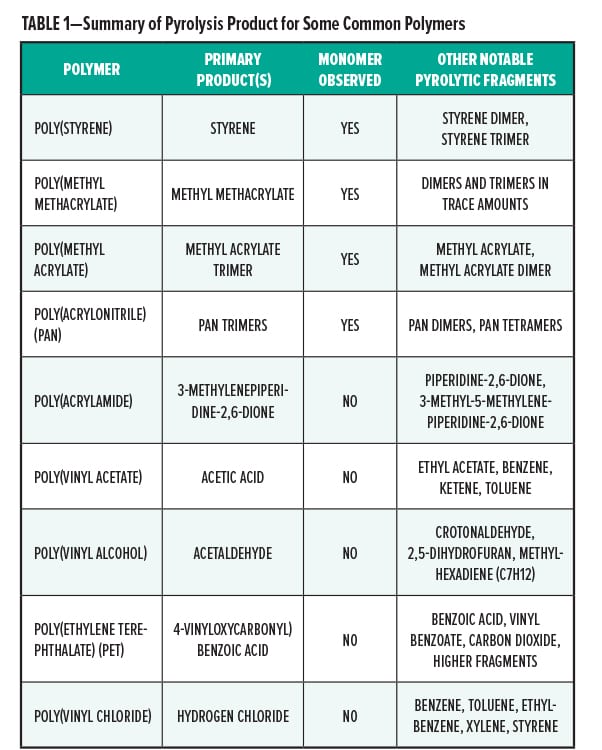 The list of pyrolysis products in Table 1 is by no means complete. Many polymers show dozens or hundreds of distinct detectable pyrolysis products after undergoing pyrolysis. The analysis of the pyrolysis GC/MS data takes expertise in the ability to interpret. EAG Laboratories has in-house scientists who perform data analysis and interpretation.

Certain classes of compounds, especially polyesters, have complex pyrolysis product mixtures that are complicated enough to cause difficulty in making a definitive polymer identification. In this case, a procedure known as reactive pyrolysis can be used. Reactive pyrolysis is where the polymer undergoes a chemical reaction in the pyrolysis chamber. This may be instead of, or in addition to, heat-induced pyrolysis of the large polymer into smaller fragments.

One common reactive pyrolysis technique is methylation. One example procedure follows. The polymeric material is mixed with a large excess of tetramethylammonium hydroxide (TMAH), a strong base, in methanol. The sample is then heated to 420°C. This allows the base to neutralize acids and form tetramethylammonium salts. Also, esters are hydrolyzed first to the free acids by the TMAH, and then neutralized to form TMAH salts. Upon further heating, these break down to form methyl esters of the acids and trimethylamine.

The generalized reaction scheme is found in Figure 4. 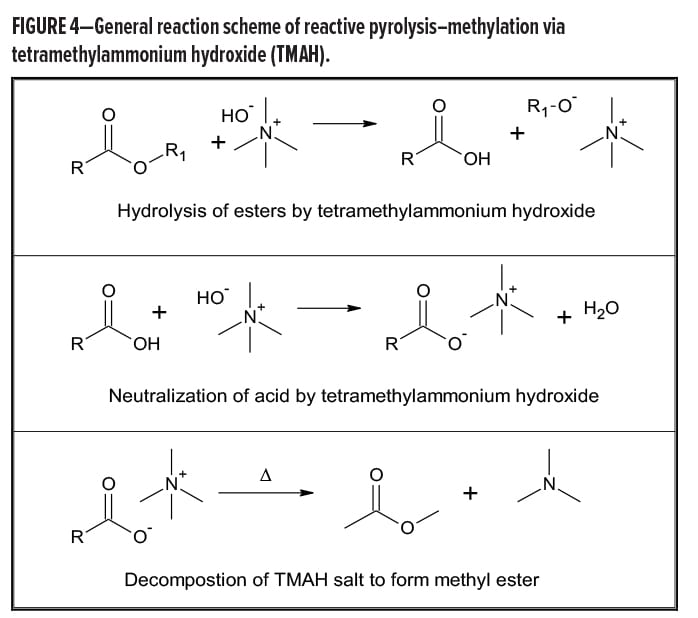 Additionally, some other functional groups may also be partially or fully methylated, such as alcohols, phenols, and amines. This procedure greatly simplifies the identification of ester containing polymers. Table 2 gives some examples of reactive methylation pyrolysis. 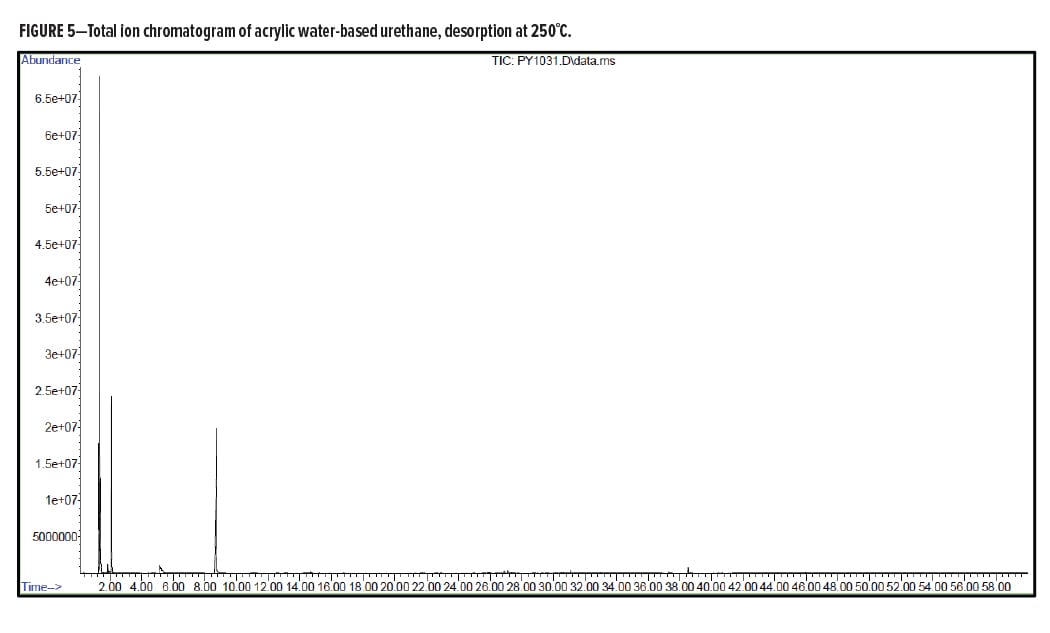 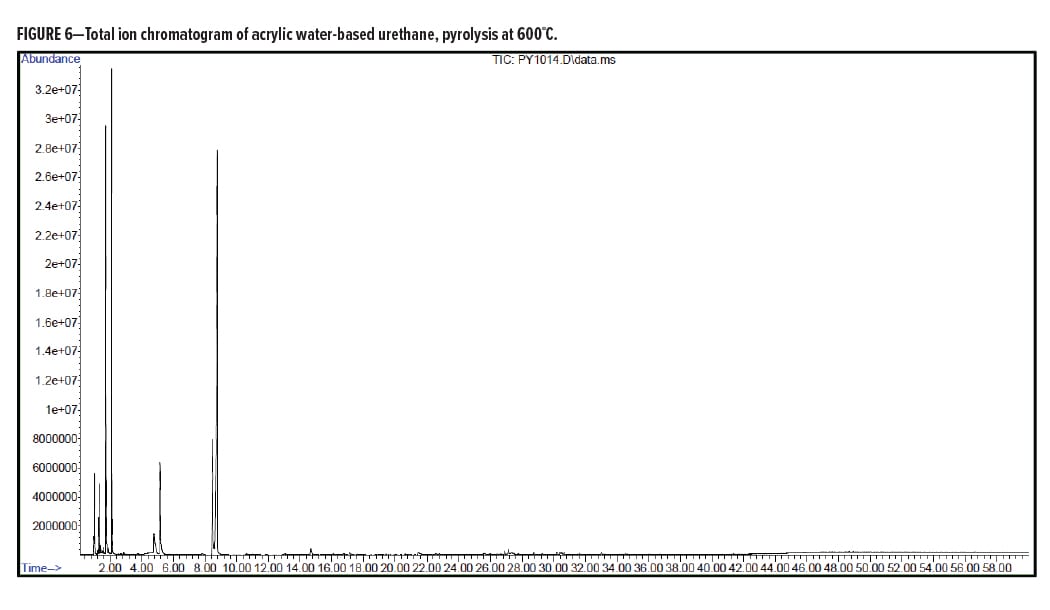 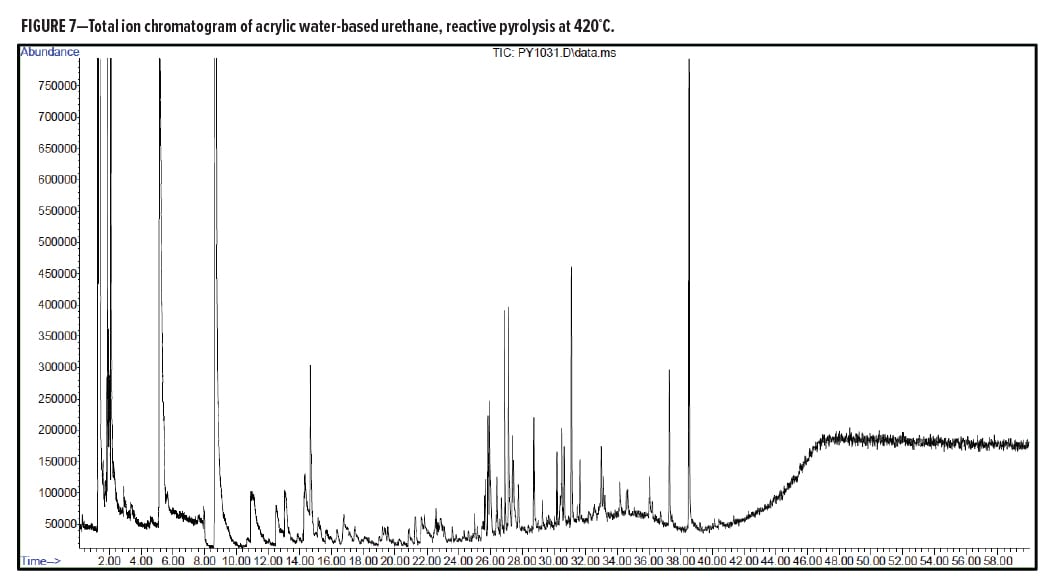 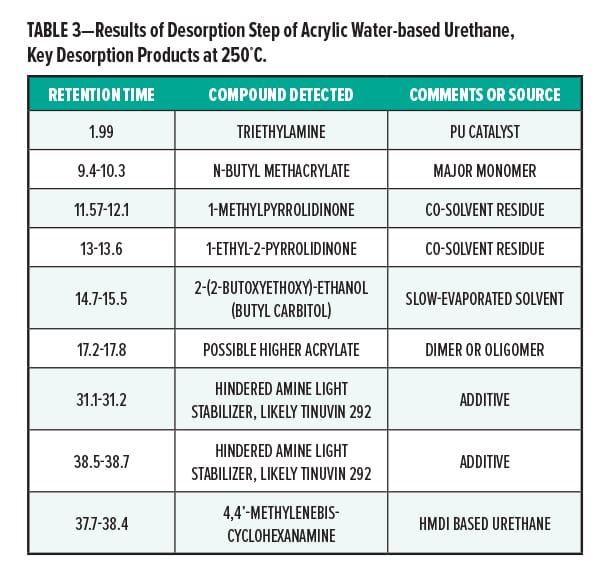 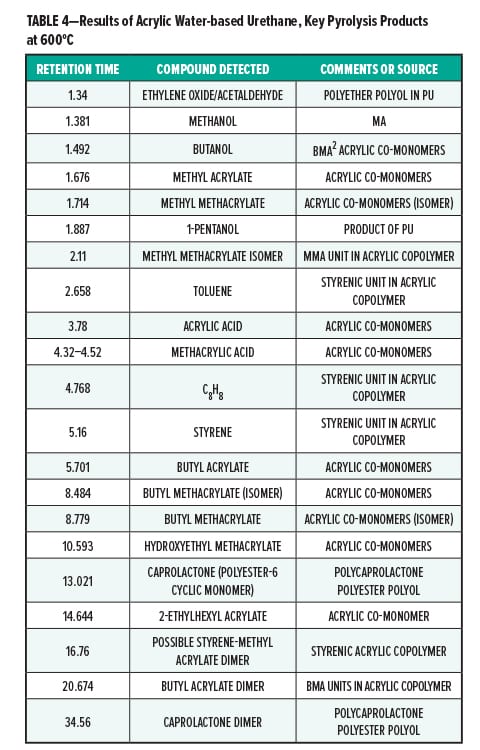 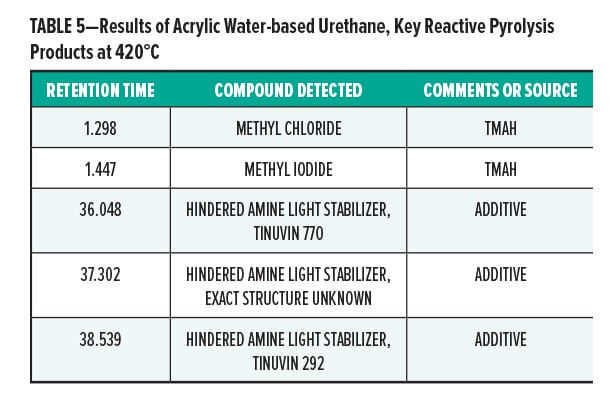 The pyrolysis data shows that the acrylic water-based urethane is consistent with a blend of styrenic acrylic copolymer with an aliphatic isocyanate-based polyesterurethane. The major monomers for this acrylic copolymer include butyl methylacrylate (BMA), acrylate, and methyl methacrylate (MMA). In addition, it includes low levels of other monomers such as 2-ethylhexyl acrylate,  hydroxyl ethylacrylate, methyl acrylate, and styrene. The polyester urethane in this sample is consistent with a hydrogenated methylenebis(phenylisocyanate) (HMDI) and polycaprolactone based polyester urethane. 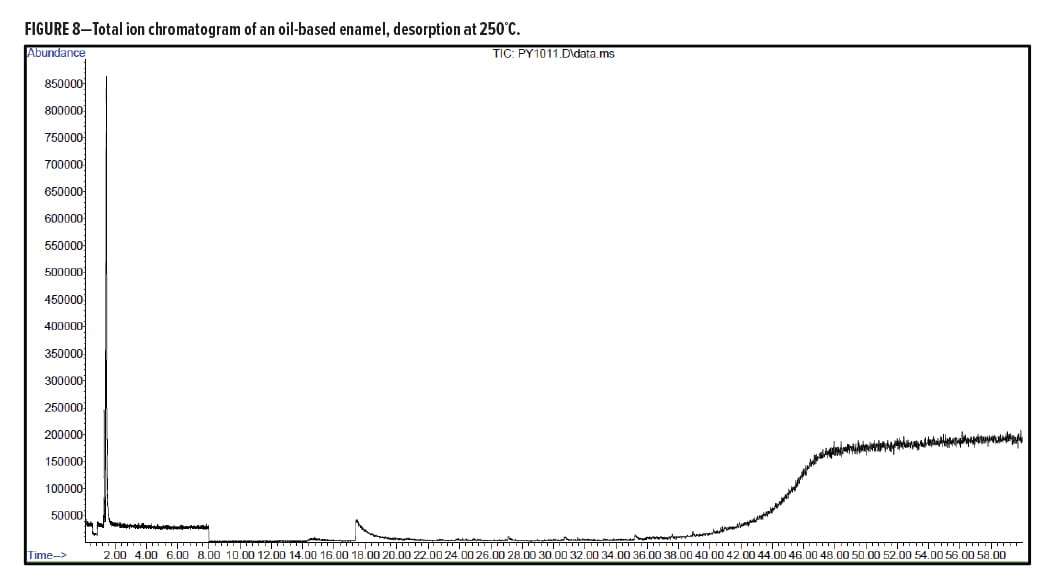 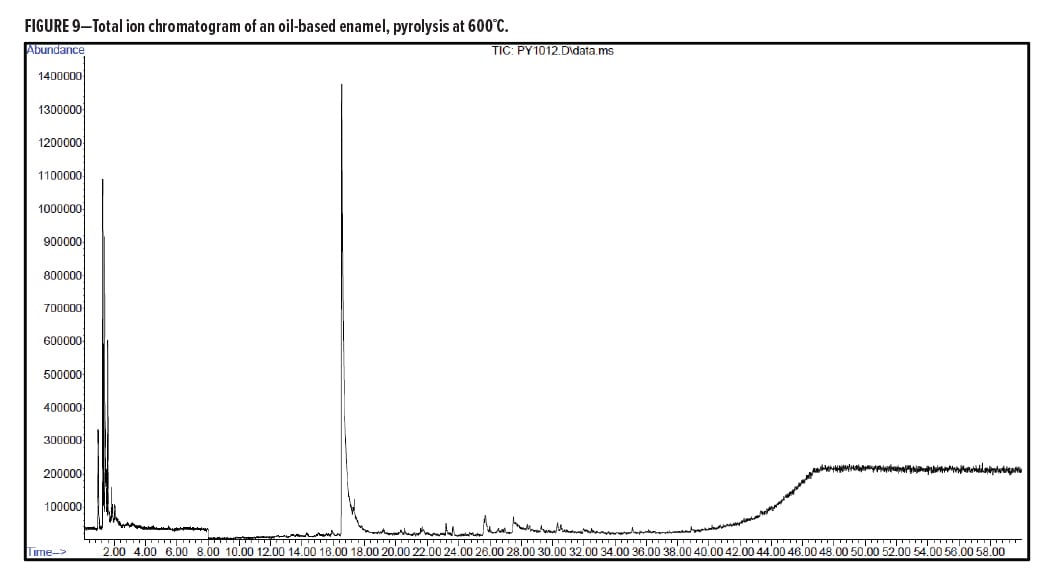 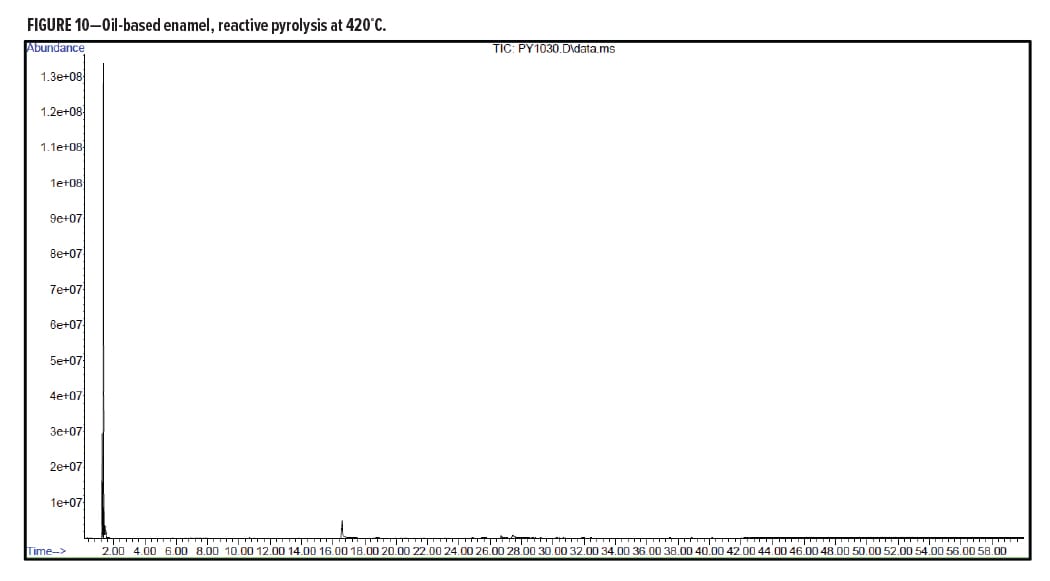 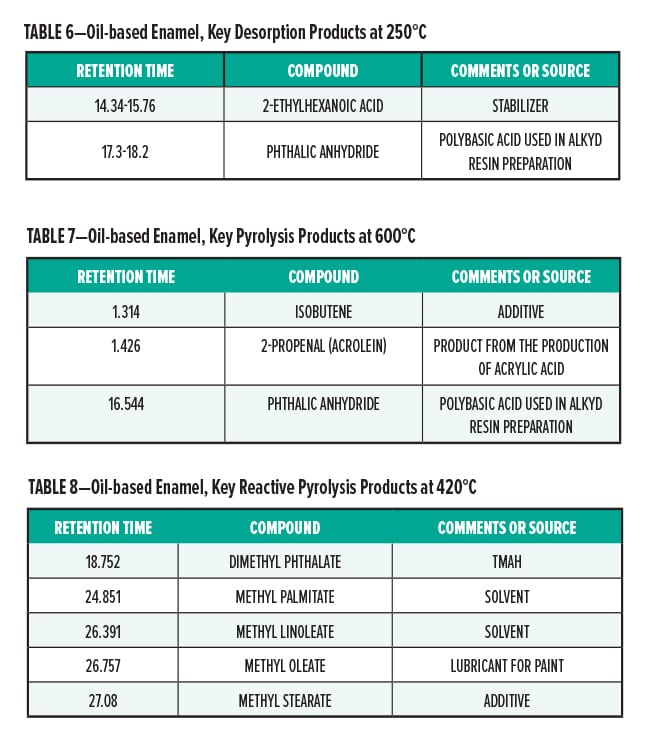 The pyrolysis data shows that that oil-based enamel is consistent with an alkyd polyester resin. The major components for this resin are phthalic anhydride and 2-propenal (acrolein). 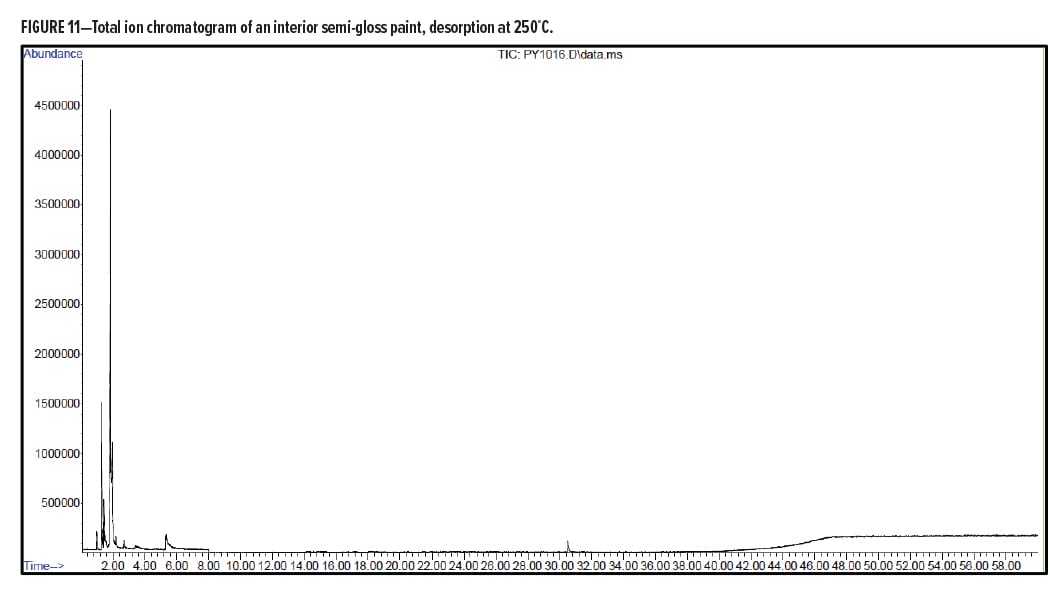 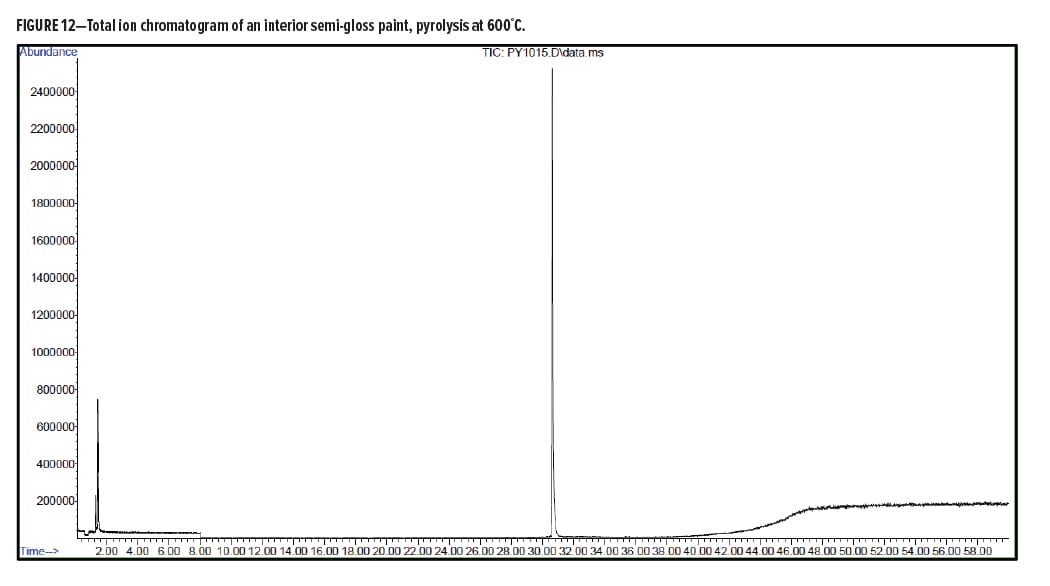 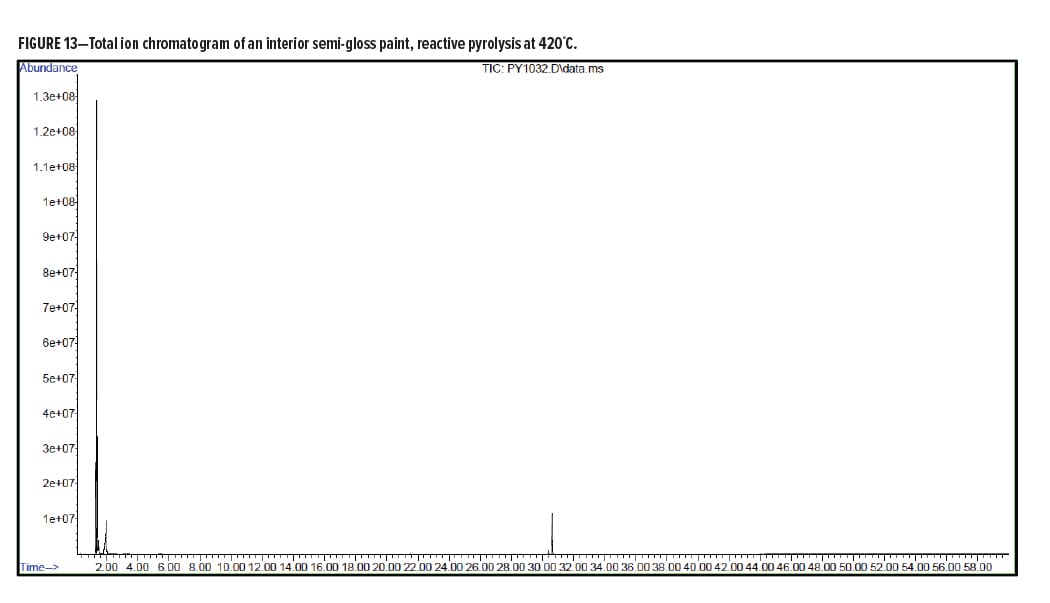 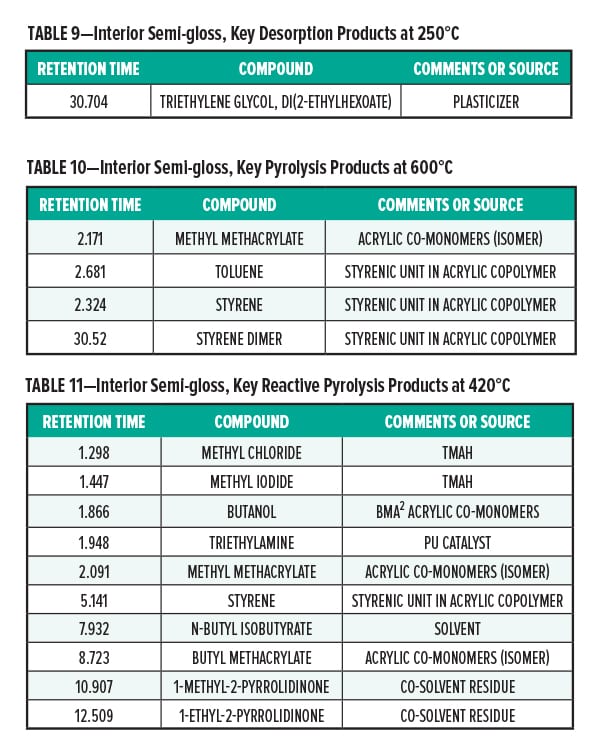 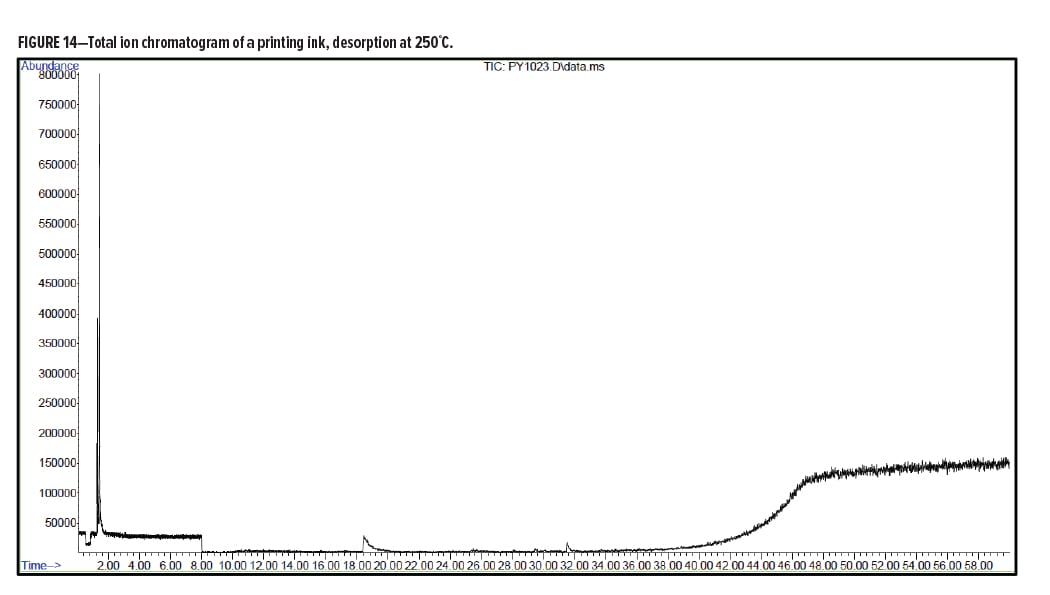 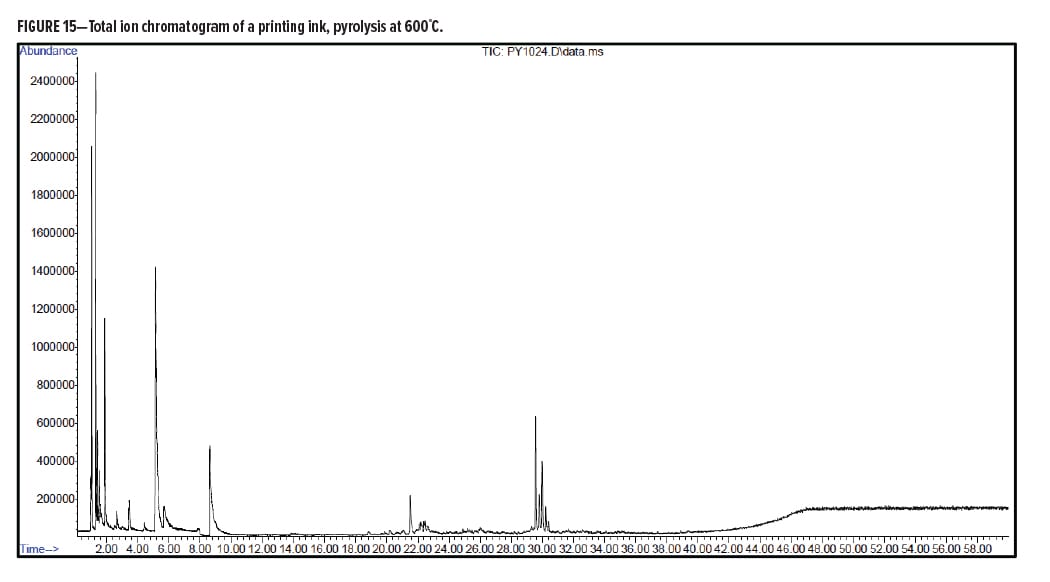 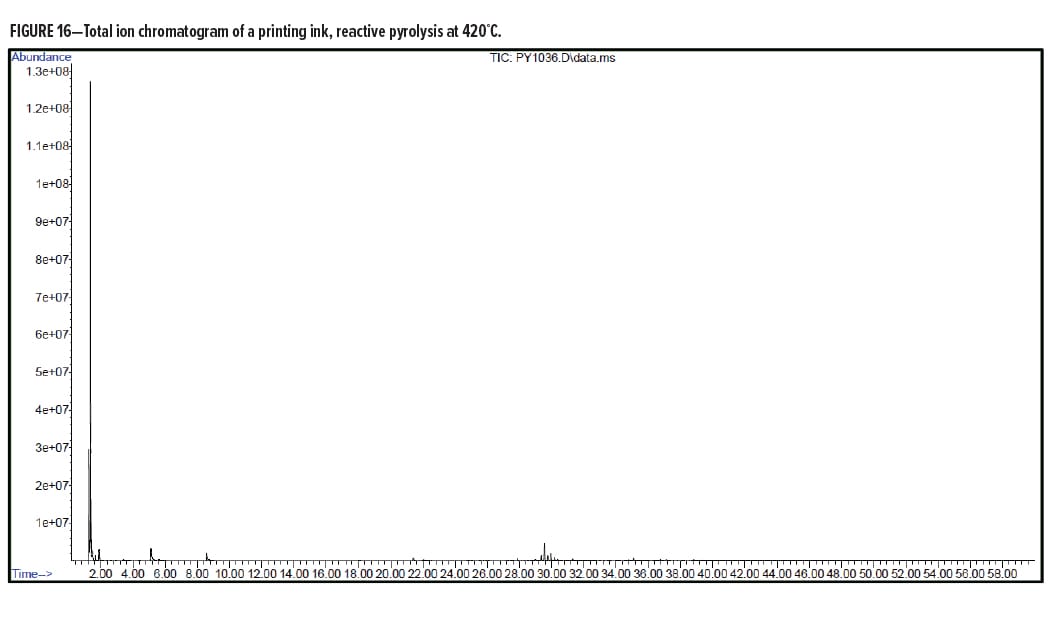 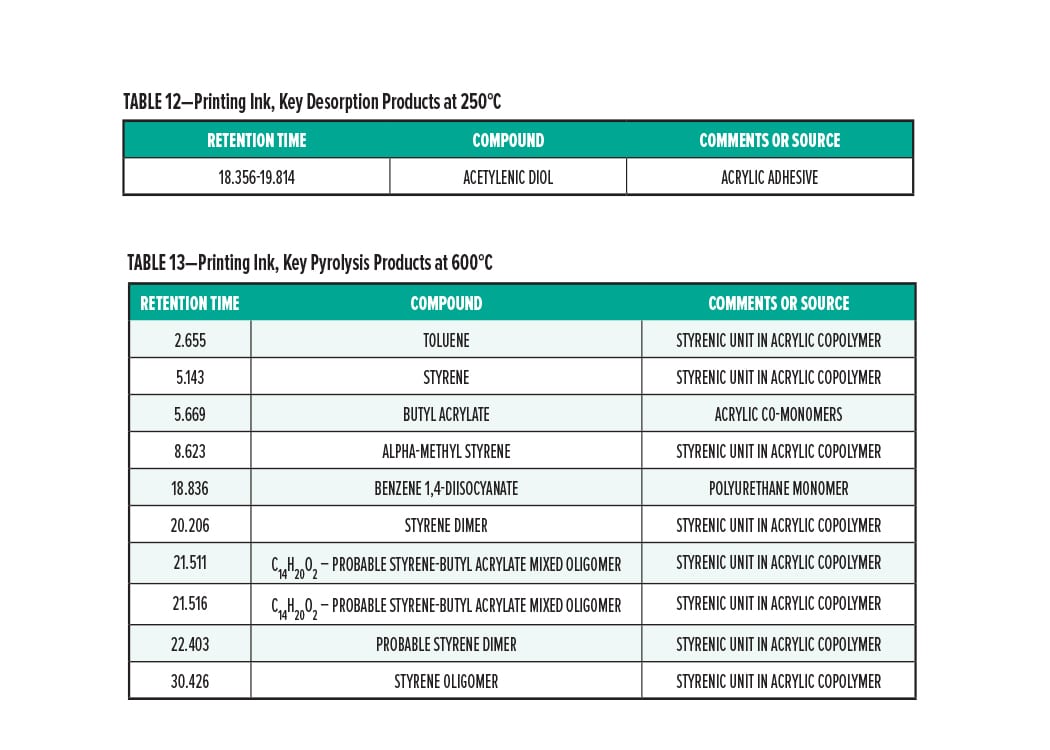 The pyrolysis data suggest that the printing ink is consistent with a blend of stryrenic acrylic copolymer with a methyl isocyanate. The acrylic adhesive, acetylenic diol, was determined to be present in the sample. The major monomers for this copolymer are butyl acrylate, methyl acrylate, methyl methacrylate, and styrene.

Pyrolysis GC/MS allows for the identification of polymer materials in matrixes that are intractable to other analytical techniques. The advantages to this technique are numerous:

There are some limitations to keep in mind when considering pyrolysis GC/MS as an analytical method. Other techniques can be used in a complementary fashion to help in the analysis.