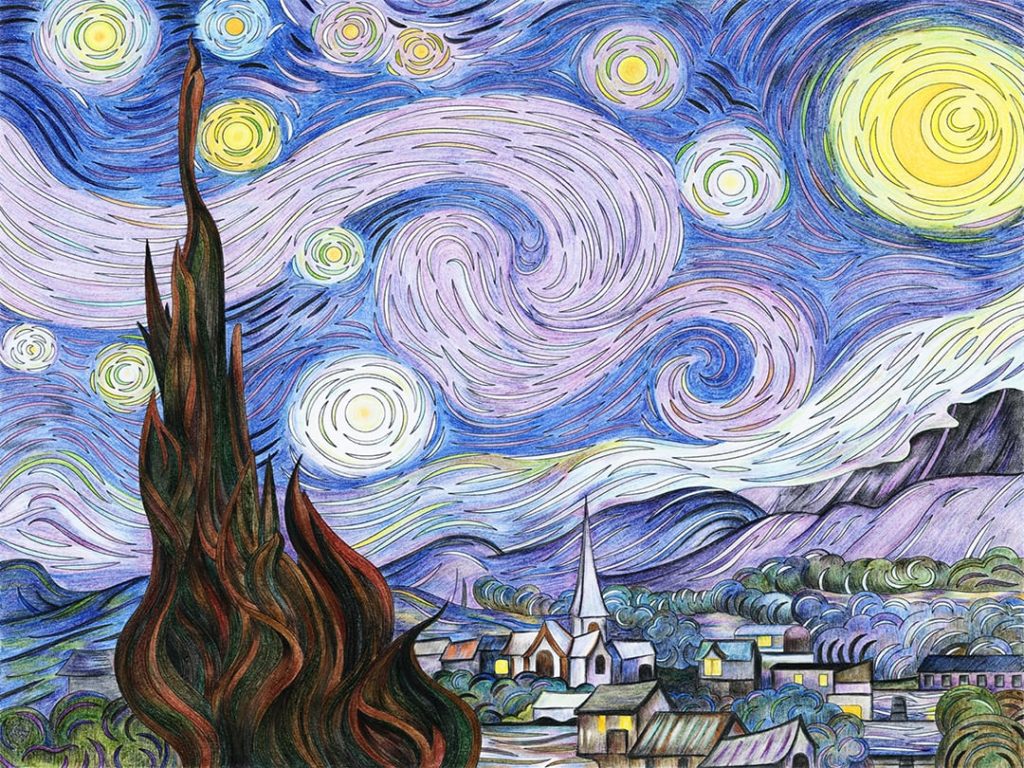 One of the goals of the Van Gogh Museum is to research the life and work of Vincent van Gogh and the art of his time, including his painting techniques and working method and the discoloration of the paintings over time. The latter issue was the focus of the museum’s REVIGO (REassessing VIncent van GOgh) project conducted between 2013 and 2017. The project was launched to gain a clearer understanding of the extent to which the colors in Van Gogh paintings have diminished in intensity.

Van Gogh once wrote that “paintings fade like flowers.” The REVICO project was focused on identifying the original pigments and colors used by Van Gogh, how they have changed over time, and the mechanisms of the discoloration process. Both traditional and modern analytical methods were used, including advanced image analysis and machine-learning techniques. Work was completed by the Van Gogh Museum in collaboration with Tilburg University, Delft University of Technology, the Cultural Heritage Agency of the Netherlands, the Rochester Institute for Technology in New York and AkzoNobel.

The major finding of the project was that Van Gogh’s pen and ink drawings and his paintings originally displayed greater color and contrast. In a letter to his brother Theo (letter 595), Van Gogh wrote, “All the colors that Impressionism has made fashionable are unstable. All the more reason boldly to use them too raw, time will only soften them too much.” Indeed, paintings in which Van Gogh indicated in various correspondence that he used the colors violet, lilac, and purple now appear blue, while those in which he used pink look off-white. The key reason: Van Gogh used unstable red lake pigments to create the purple and pink paints he used. The red has faded or disappeared completely, leaving the other colors in his mixtures. As an example, in the painting The Bedroom, the blue walls and doors we see today were originally purple, and the floor was more intensely red. How do we know?  Digital recreation.

More recently (over three years), AkzoNobel color experts completed the digital recreation of another Van Gogh masterpiece—Field with Irises near Arles. Using technology normally applied in the automotive industry, the company’s Color Technology Group worked in conjunction with researchers from various disciplines and institutions to meticulously analyze digital images of the painting supplied by the National Gallery in Washington to determine the pigment composition of the original. The former head of conservation at the Van Gogh Museum Ella Hendriks then removed most of the yellowed varnish layer, which was applied after Van Gogh’s death, from the painting. The varnish was removed carefully in order to ensure that none of the underlying paint was affected.

Simultaneously, calculations regarding the colors of the painting underneath the yellowed varnish were performed. The calculated colors were then compared to the colors of the painting once the varnish was removed. The digitally calculated colors were confirmed to strongly match the current state of the painting after removal of the varnish layer. However, this painting has changed color not only due to the aged varnish, but also due to fading of several of the pigments over time. Since it is not possible to rejuvenate the pigments in the actual painting, only a digital restoration could be created to show how the original colors of the painting most probably appeared. The original colors were therefore determined for each of the pigment paints that had been used by Van Gogh in the painting. This process involved imitation of the preparation of oils and pigment paints according to 19th century procedures as much as possible. The color properties of all reproduced pigment paints were then determined and used to calculate the original colors of the full painting. A full digital color reconstruction was then completed.

AkzoNobel has been a proud partner of the Van Gogh Museum’s restoration studio since 2013. The company’s color experts and Sikkens brand have also helped design two major exhibitions at the venue, including the recent Van Gogh and Japan exhibition. “As global experts in color and a world leader in digital color matching, we know how much color matters,” said AkzoNobel CEO Thierry Vanlancker. “We pride ourselves on our ability to deliver consistently accurate paints and coatings that provide lasting color performance, so we’re very pleased to have partnered with the Van Gogh Museum to digitally recreate a Van Gogh masterpiece.” Added Axel Rüger, director of the Van Gogh Museum: “Color for Vincent van Gogh meant emotion and it is that aspect which inspires millions of people around the globe to visit us.”

In addition to contributing to the preservation of historic works of art, AkzoNobel also supports new and upcoming artists through the AkzoNobel Art Foundation, which as founded in 1996. The collection currently consists of around 1,800 works of modern art and consists of works by new and sometimes still unknown, talent. The art is displayed in the AkzoNobel Art Space. According to the company, it represents a new exhibition approach that has proved to be highly successful, with more than 100,000 visitors having been welcomed since it opened its doors to the public in 2016.

More information about the REVIGO project can be found at https://www.vangoghmuseum.nl/en/knowledge-and-research/research-projects/revigo/research-results-revigo-paintings.