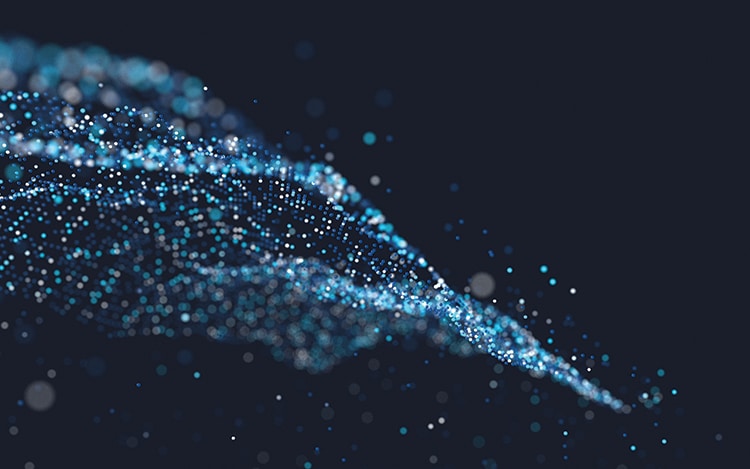 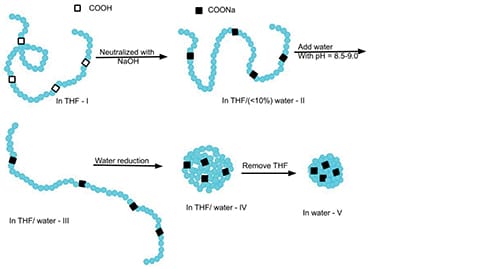 Colloidal unimolecular polymer particles, or CUPs, are true nanoscale charged particles of size less than 10 nm that are made by a simple method that allows for preparation of additive-free, zero-volatile organic content (VOC) and stable dispersions. These CUP particles are made from a single polymer chain containing a well-balanced number of hydrophobic and hydrophilic units (Figure 1). The polymer chain is transformed into a CUP particle because the polymer-polymer interaction exceeds polymer-solvent interaction during the addition of water to the polymer in dilute solution in a low-boiling, water-loving solvent, resulting in collapse of the chain to form a particle.

This process is like formation of micelles, or the water reduction process in water-reducible coatings.1 The charged groups on the surface of the particles provide stability and prevent aggregation due to ionic repulsion. The CUP suspension is free of any additives or surfactants as it contains only charged particles, water, and counterions. Due to the process simplicity, it is easy to control the particle size, charge density on the surface, and composition of these particles.2 CUP particles can also be a good model material for study of protein due to similarities in their size. They can also have potential applications in the field of coatings, drug delivery, catalyst matrix, etc.

CUPs have a great potential in the field of coatings as demonstrated in several publications by Van De Mark et.al. They can be used as coating resin in conjunction with latex and polyurethane dispersions (PUDs) and can be cured with an aziridine3 or a melamine crosslinker4. CUPs with sulfonic acids as the charged stabilizing group can be used as a catalyst for waterborne curing such as acrylic-melamine systems.5 CUPs with amine functional groups CUPs with amine functional groups have been synthesized and used as a crosslinker for waterborne epoxy coatings.6 The CUP particles are hydrated with a layer of water around them, often referred to as surface or bound water, which is non-freezable.

CONTINUE READING IN THE FEBRUARY 2021 DIGITAL ISSUE OF COATINGSTECH.