Polysilazanes—Binders That Make a Difference to Surfaces

Polysilazanes are pre-ceramic polymers with a silicon-nitrogen backbone. In recent years they have developed as a high-performance binder in protective coatings for transportation vehicles, commercial and residential buildings, and industrial plants. This article reviews their structure-property relationship and highlights their performance in high-temperature, surface hardness, weathering and corrosion protection, and anti-graffiti applications.

Automobiles, buildings, and infrastructure all require long-lasting surface protection against weathering, corrosion, heat, and abrasion. Thus, having robust protective coatings is crucial for preserving their value and reducing maintenance cost and down time. While polyurethanes and epoxies are the conventional solutions for protective coatings, fluoropolymers and Si-containing polymers have attracted a considerable amount of attention because of their excellent performance in chemical resistance, heat stability, or surface hardness. Among them, polysilazanes have emerged as an outstanding binder material for high-temperature, weather-proof, and abrasion-resistant coatings.

Since the first report by Stock et al. in 1921,1 polysilazanes have been used in a wide variety of applications including polymer-derived ceramics,2 thermal, gas and moisture barriers,3 thin-film electronics,4 protective coatings,5 and more.6 They are excellent precursors for ceramic-like coatings with dense Si–O–Si and Si–N–Si network. In addition, the variety of chemical group substituents on the backbone enables fine-tuning of their performance properties.

Generally speaking, there are two classes of polysilazanes (Figure 1). One is inorganic perhydro-polysilazanes (PHPS) that feature H groups on both Si and N atoms, and the other is organic polysilazanes (OPSZ) that have organic functional groups grafted onto Si atoms. PHPS is an important gap-filling and planarization material in the semiconductor industry,4 and OPSZ has emerged as a leading technology for durable surface protection.5 Both OPSZ and PHPS are commercially available.7 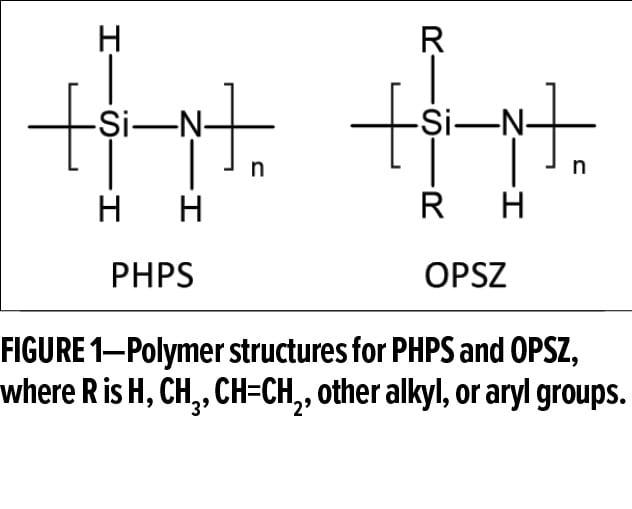 Compared to polysiloxanes and fluoropolymers, polysilazanes offer greater high-temperature resistance and surface hardness as well as comparable performance for corrosion protection and easy-to-clean properties. For instance, OPSZ-based coatings offer a pencil hardness of 5H when cured at room temperature for seven days, whereas coatings made from a commercial methyl silicone resin have a hardness of B under the same curing conditions.8 Furthermore, OPSZ-based coatings exhibit outstanding thermal stability up to 1000°C without significant mass loss, while the coatings based on this silicone resin can withstand temperatures up to 650°C only when blended with heat-
resistant lamellar aluminum pigments.8

Polysilazanes are normally synthesized with dichlorosilanes and ammonia at a temperature range of -10°C to 0°C, and the molecular weight generally ranges from 500 to 10,000.9 PHPS is synthesized by reacting Cl2SiH2 with gaseous ammonia in a non-polar solvent, and the side product, NH4Cl, is a precipitate that can be removed via filtration. OPSZ is advantageously synthesized in liquid ammonia, which serves as a reactant and also as a solvent. The NH4Cl side product dissolves in excessive liquid ammonia and the OPSZ product is isolated as the bottom liquid phase.9 OPSZ with different side chains can be synthesized by selecting dichlorosilanes with different R groups (Figure 2). Polysilazanes can be formulated with compatible pigments, additives, and fillers.5,10 Their formulations can then be applied to surfaces by using conventional solventborne coating techniques, including spray, spin, wipe, dip, etc.

Polysilazanes are thermosetting resins, and their coatings can be conveniently cured and crosslinked in ambient conditions. When exposed to moisture and oxygen, different functional groups, such as Si–H and Si–N–H, undergo hydrolysis reactions and yield silanol groups that are further condensed to form highly crosslinked Si–O–Si bonds (see Route 1 in Figure 3). Alternatively, polysilazanes can also be cured by heat or ultraviolet radiation under an inert atmosphere to generate a non-oxide ceramic network with Si–N or Si–C linkages (Route 2 in Figure 3). The versatility in curing chemistry is another advantage for polysilazanes, and the strong and dense network of Si–O–Si and/or Si–N–Si linkages obtained after curing protects valuable surfaces from thermal, chemical, mechanical, and environmental impacts. 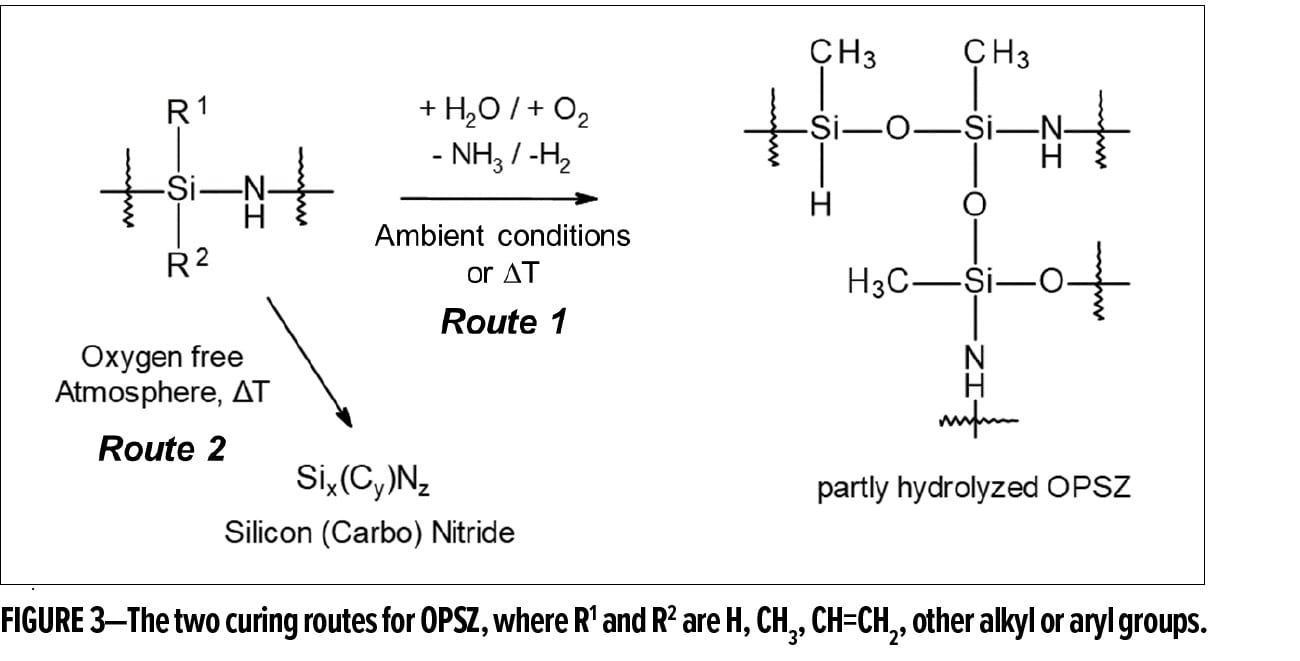 Polysilazane is a superior binder material for thermal barrier coatings (TBC). This property can be easily demonstrated via thermal gravimetric analysis (TGA), which provides information about phase transitions and/or thermal decomposition. In this measurement, the mass of a sample is measured over time while the temperature ramps up from room temperature at a constant rate, and the final result is then plotted as a percentage of initial mass versus temperature. Figure 4A shows polysilazane outperforming commercial heat-resistant silicone resins from two different manufacturers. Polysilazane is stable without significant mass loss up to 1000°C, while both silicone resins suffer a substantial mass loss when the temperature is over 400°C. This result shows clear evidence that polysilazanes have outstanding thermal stability, and thus they are ideal binder materials for TBC in automotive and industrial applications, such as exhaust pipe and manifold coatings. For instance, Motz et al. used PHPS as a bond coat for both inner and outer wall of a stainless-steel exhaust pipe, and then the inner wall was further coated with an OPSZ-based TBC with embedded ceramic fillers (see Figure 4B). This coated pipe withstood pyrolysis at 1000°C for one hour in the air with excellent gloss retention, while the control—an uncoated pipe—suffered from serious tarnish after pyrolysis (see Figure 4C).11 Furthermore, Cavallin et al. have reported the commercial use of polysilazane as a high-temperature binder for heat-resistant paints and compositions.12 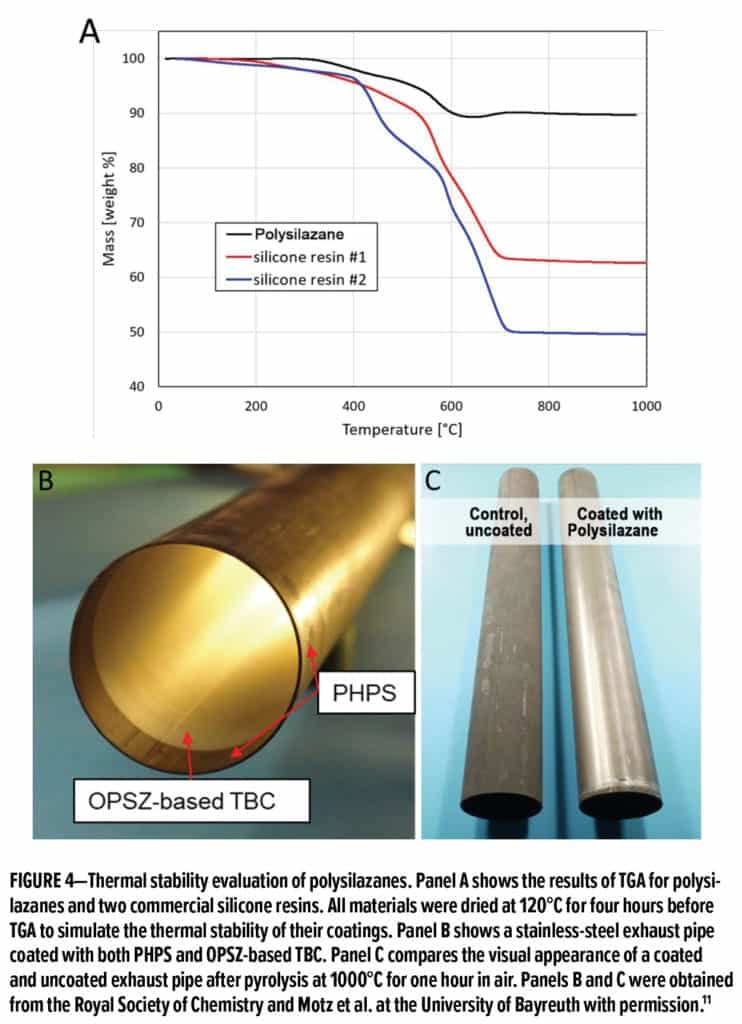 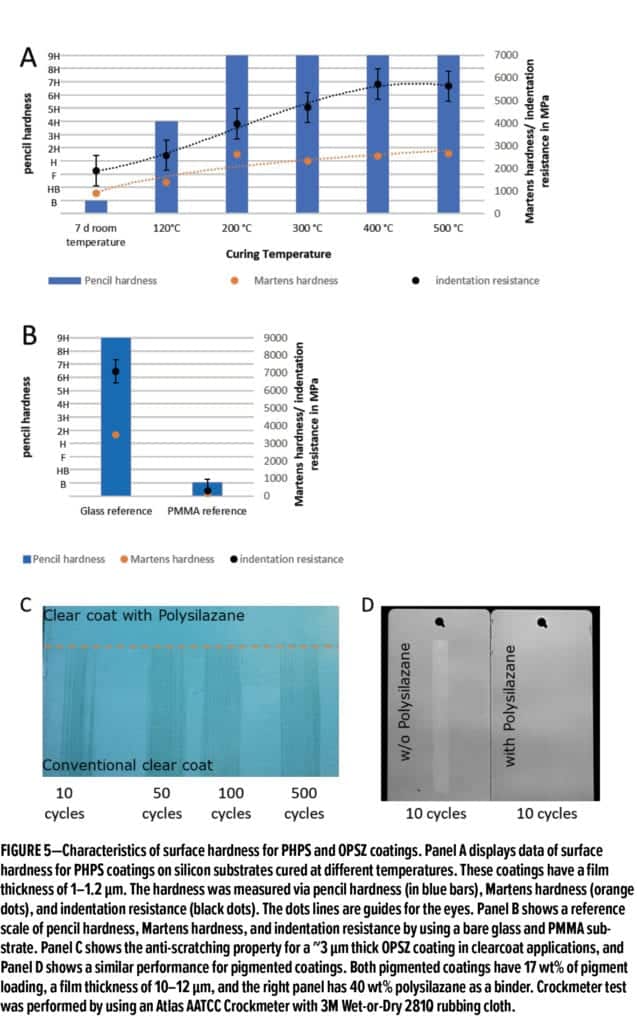 Figure 5C shows that a crockmeter test was performed on a metal substrate, which has pigment basecoat and polyurethane clearcoat. The top portion of the substrate was further coated with a polysilazane hard coat. The polysilazane-
coated region exhibits excellent scratch resistance up to 500 crocking cycles, while the area without polysilazanes shows obvious scratches even after 10 cycles.

Additionally, polysilazane can be used as a scratch-resistant binder for pigmented coatings. Figure 5D shows that a TiO2-based white paint with a polysilazane binder has excellent scratch resistance in a similar crockmeter test (substrate on the right), while the control—a paint without polysilazane—was seriously scratched (substrate on the left). Thus, polysilazane can be used as a robust binder in clear and pigmented coatings to protect valuable and decorative surfaces, a particularly important application for the automotive industry.

Artificial and accelerated weathering is an important method to evaluate a coating’s environmental durability. As Table 1 outlines, performance tests that have been conducted on these materials include artificial weathering,13-15 UV stability,16 condensation,17 and salt-spray corrosion tests18-19 by following a variety of DIN/EN/ISO methods for OPSZ-based clear coatings. For example, artificial weathering is performed under controlled light, heat, and humidity by using a Xenon arc lamp to simulate the sunlight irradiation,13-15 and condensation is conducted by repeating a climatic cycle at defined thermal load and humidity.17 In addition, salt spray tests, particularly copper-accelerated salt spray (CASS),19 are more demanding tests for coatings than weathering and condensation. CASS is commonly done at a temperature of 50°C with a 50 g/L sodium chloride solution containing acetic acid and copper chloride at pH 3, and this solution is repeatedly sprayed onto the coatings. Polysilazane coatings passed the tests listed in Table 1 without showing defects (up to 3000 h), such as delamination, crack, blister, or rust. For instance, Table 2 compares the performance before and after artificial weathering and UV stability test for two OPSZ-based clear coatings. The data show that their pencil hardness and gloss had little changes after either test, and the slight decrease in water contact angle was due to hydroxylation of the coating surface after 1000 h of testing. 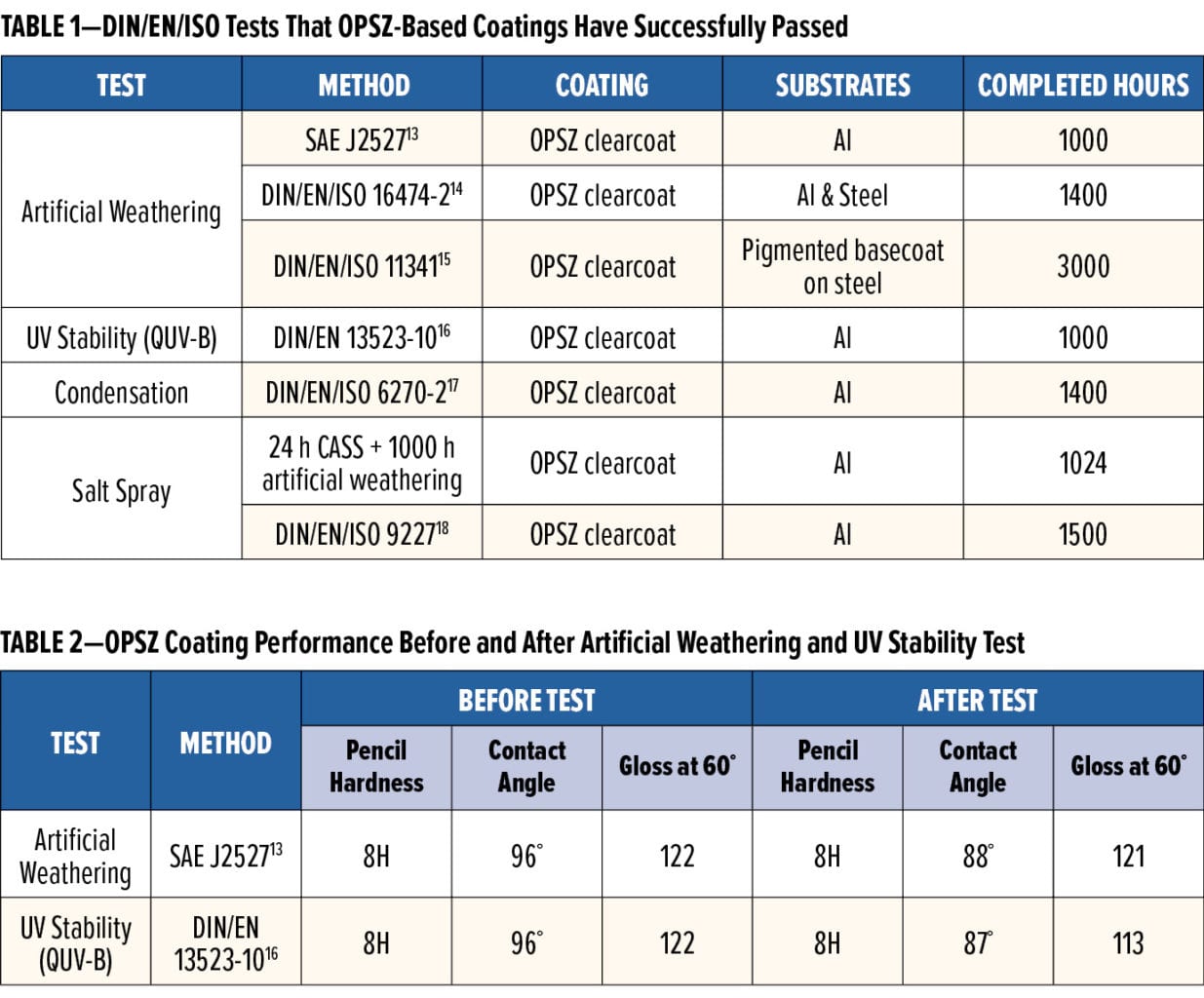 Figure 6A shows two steel substrates that were partially covered by a white basecoat to define an M-shaped mask. The substrate on the left was further coated with an OPSZ-based clearcoat, while the one on the right was a control without this clearcoat. After 10 days of condensation testing at a constant humidity, the control developed severe rust, while in sharp contrast, the substrate protected by polysilazane showed no defects. Similarly, Figure 6B displays a steel substate that was partially coated with a polysilazane-based clearcoat. Then this substrate was exposed to hydrochloric acid (HCl) vapor for three days at room temperature in a home-built corrosion test chamber. This proof-of-concept corrosion test clearly demonstrates that polysilazane coatings provide outstanding protection against HCl vapor, which is highly corrosive. In summary, the above results confirm that polysilazanes are an excellent binder choice for durable anti-corrosion and anti-weathering coatings, and can find a wide range of uses in high-rise buildings, marine coatings, and infrastructures. 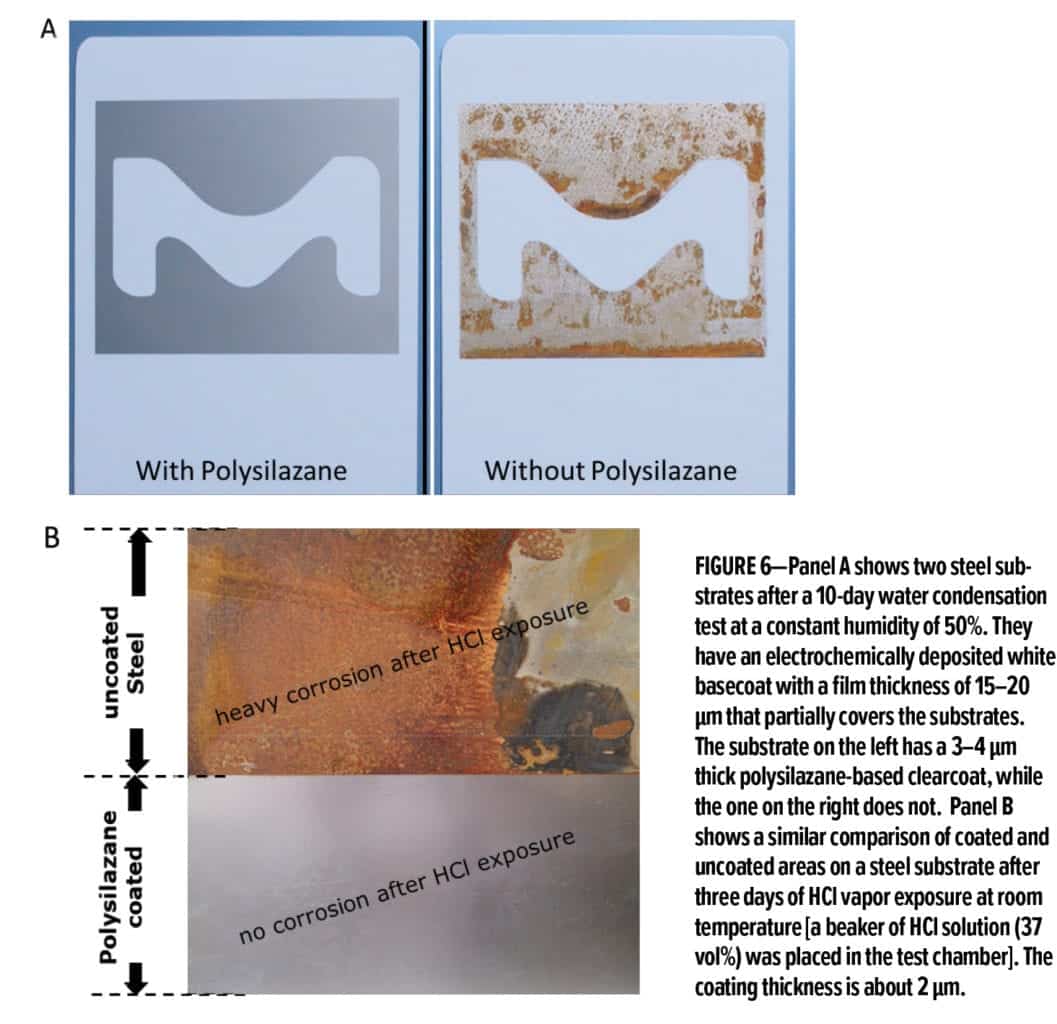 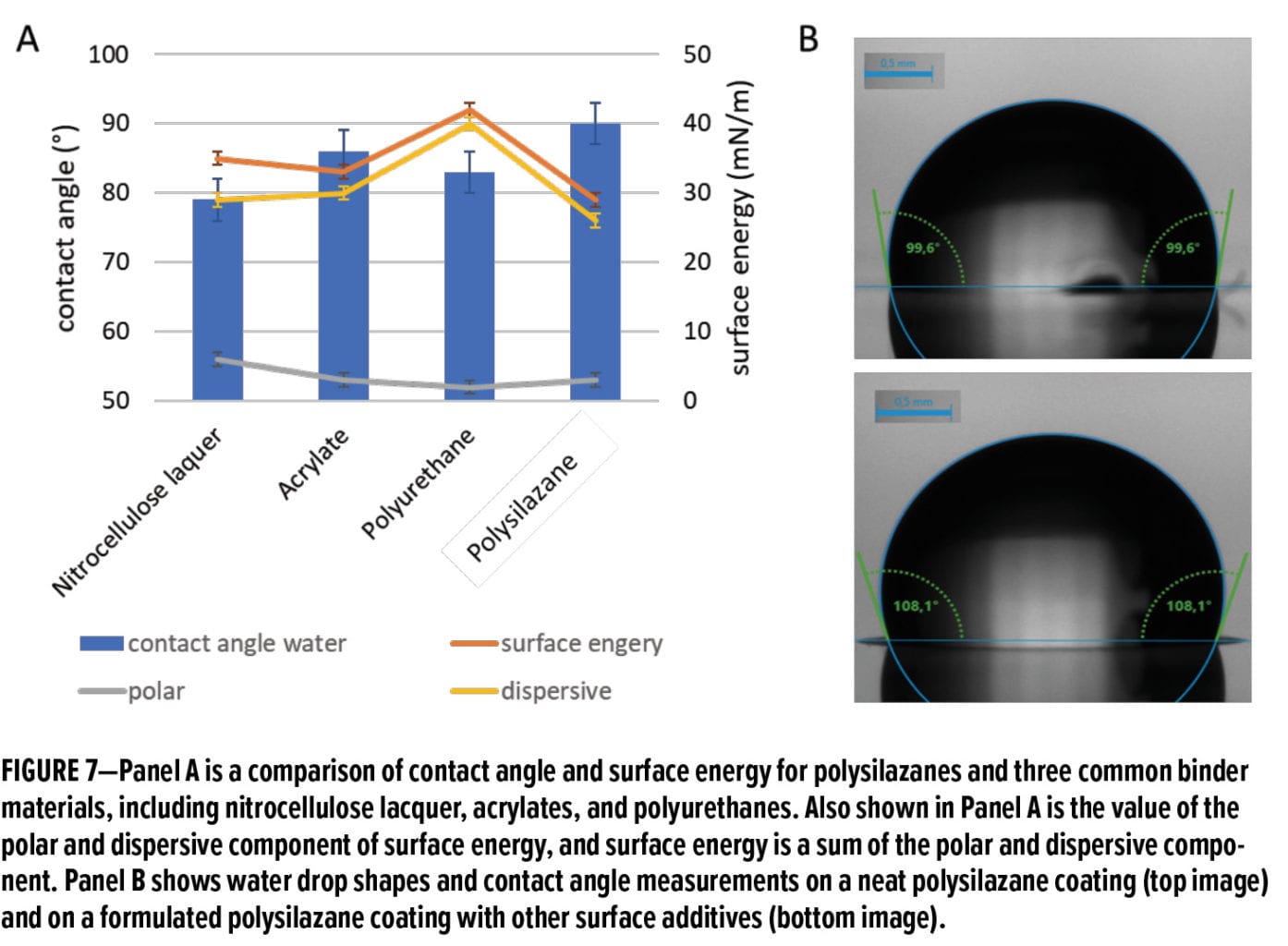 Figure 8A demonstrates the anti-graffiti feature for polysilazane coatings with a marker test. Three permanent markers with different colors were used to draw a line from an uncoated metal substrate (left) to an OPSZ coated substrate (right). The coated substrate shows clear repellency against the ink, which can be immediately removed using a dry cloth without detergents (see inset), while the uncoated one was heavily marked and very difficult to clean with the same cloth. Figure 8B shows the results of a standard anti-graffiti test for polysilazane coatings by following ASTM D6578.21 This standard test requires the contaminants to stay on the coating for 24 h before removal, and different levels (1 to 5) indicate the ease of removal (level 1 being the easiest). The polysilazane-based coating shows excellent anti-graffiti performance against wax crayon (level 1) and also good performance against water- and solvent-based makers (level 3) and acrylic paint (level 4). The anti-graffiti and easy-to-clean properties of polysilazanes have already found applications in Deutsche Bahn railways and commercial buildings.22-23 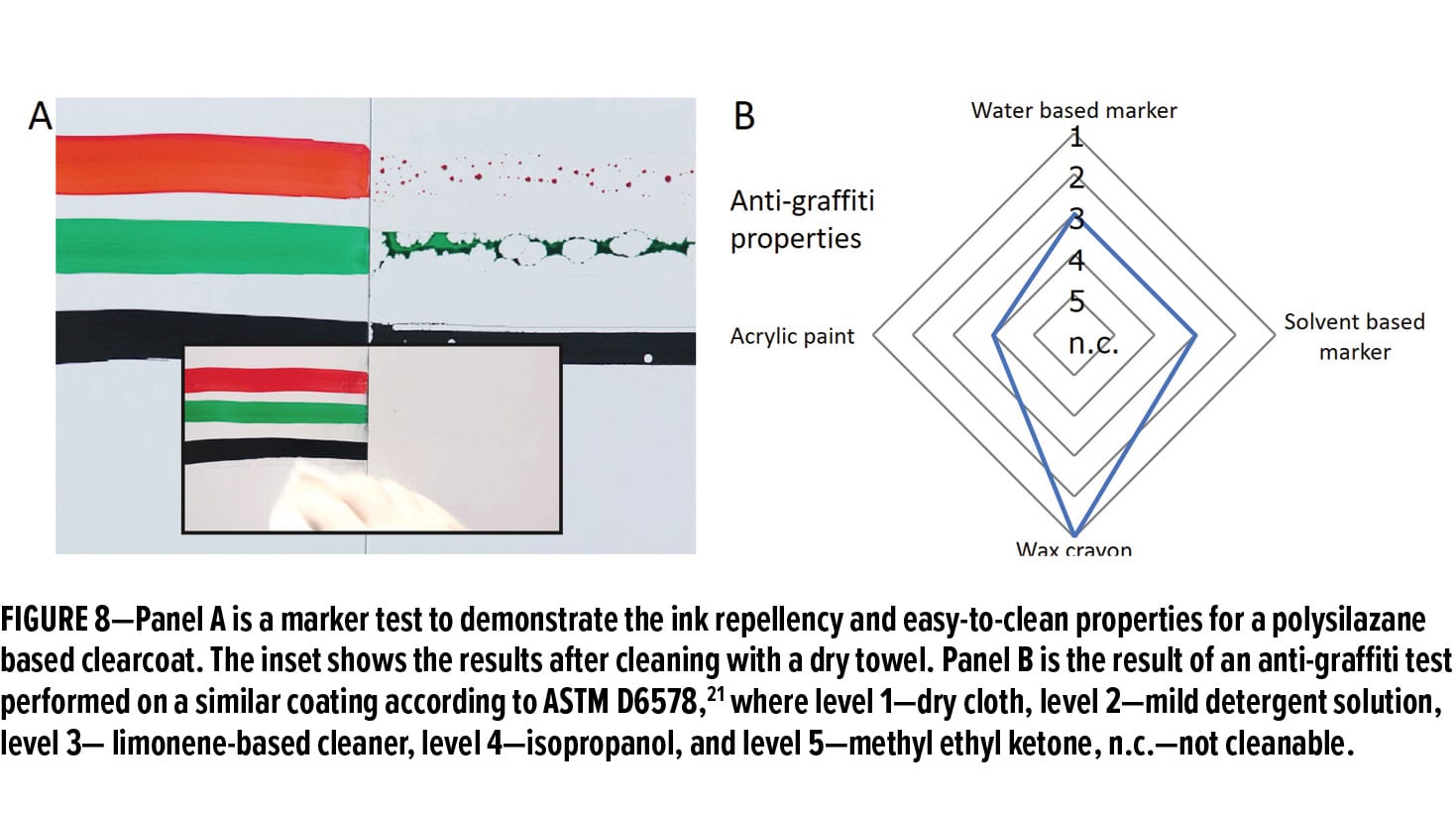 In addition, polysilazanes can covalently bind to the polar groups on natural or treated surfaces, thus offering excellent adhesion to many substrates, including metal, glass, plastics, ceramics, etc. They also form smooth and uniform coatings on these substrates. In Figure 9, results from an optical profilometer reveal that a cold-rolled steel substrate has an average surface roughness of 0.5 mm (Figure 9A) and that an OPSZ-coated steel substrate is reduced to 0.1 mm (see Figure 9B). The OPSZ coating generates a smooth surface that leads to a slight increase in gloss and also lowers the tendency for water and dirt accumulation. Additionally, Figure 9C shows the surface profile for a 10 mm thick OPSZ-based coating on a glass substrate, and the average roughness is below 10 nm, which is less than 0.1% of total film thickness.

In summary, polysilazane can provide optimal protection for a multitude of surfaces. The unique Si–N backbone and side-chain chemistry enable a dynamic structure-performance relationship and many advantages, including strong and long-lasting protection against heat and abrasion, and excellent easy-to-clean properties and corrosion resistance. It is a multi-functional binder in both clear and pigmented coating systems, and can also find applications in anti-fouling, anti-snow/ice, and many other areas.

The authors would like to thank Ceaso Hawkins, Sergej Nell, Craig Hughes, Gregory McCraw, Christoph Koerber, Qinyun Peng, and Michelle Minix for their support of this work. Also, special thanks to Professor Gunter Motz for sharing his results.

View All Raw Materials Articles
This website uses cookies in order to improve and customize your browsing experience. By continuing, you consent to the use of cookies for analytic and functional purposes, as discussed in the Types of Information Collected section of our Privacy Policy.AcceptRejectPrivacy policy