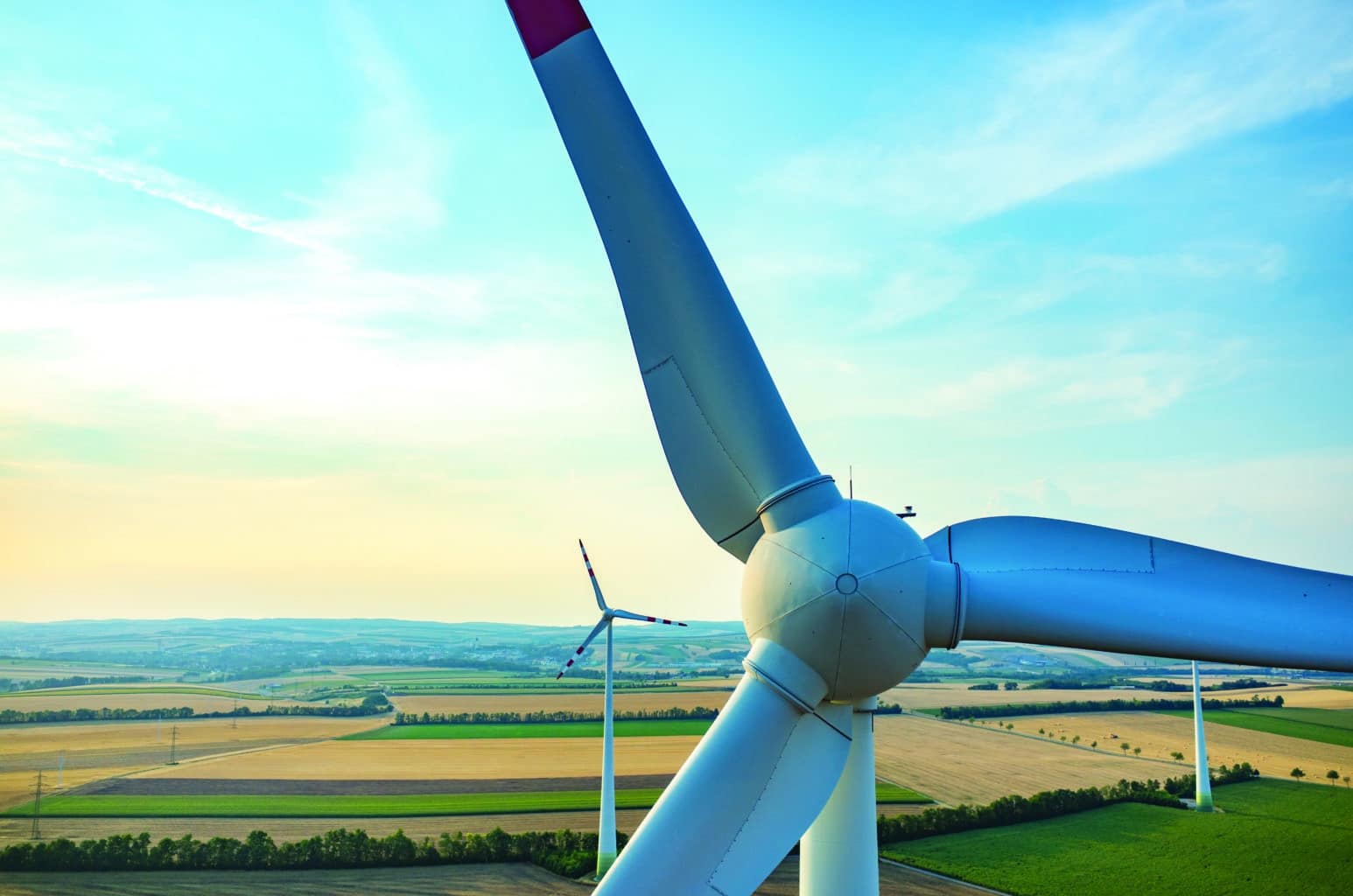 Recently, two-component (2K) Michael Addition-based coating systems providing fast drying at room temperature in combination with tunable open time and very long pot life have entered the market. Adhesion robustness over a variety of substrates is an important point of attention for such fast drying and inherently rather apolar coating systems. Here, we present a study that resulted in new malonated polyester resins facilitating a significantly improved adhesion performance of the Michael Addition-based coatings, especially over epoxy-amine and polyurethane primer substrates. Notably, the introduction of hydroxyl groups is an effective way to improve properties such as wet adhesion.

In 2015, a breakthrough high solids two-component (2K) coatings system was introduced, based on Real (or Carbon) Michael Addition (RMA) chemistry.1 In this base-catalyzed system, malonated polyester donor resins are reacted with acryloyl-functional oligomeric RMA acceptors (Figure 1).2 By using a blocked base catalyst, e.g., a tetraalkyl ammonium hydroxide species reacted with a dialkyl carbonate, combined with a kinetic control additive package, the pot life and drying time can be decoupled, meaning that a long pot life can be combined with fast curing. In addition, the open time of such RMA paints can be effectively tuned by controlling the amount of kinetic additives present in the formulation.

The kinetic control additive package chiefly consists of special species (HA) that can add to the acryloyl acceptor by a Michael Addition after deprotonation. Such species distinguish themselves from the RMA donor by being significantly more acidic than the donor C–H, meaning that they will be deprotonated more readily, hence postponing the fast addition of the RMA donor onto the acceptor. Secondly, the conjugate anion A- has a significantly lower reactivity towards the acryloyl acceptor, so the consumption of these species by the MA reaction is slow, affording a significant effect on early kinetics already at low concentrations. Furthermore, the HA species is preferably a low molecular weight, mono-functional component generating an A-acryloyl adduct, which does not significantly increase viscosity of the paint. Various components were shown to meet these criteria, including succinimide and triazoles.

The described developments lead to a strongly improved application robostness compared to the first generation of RMA crosslinkable paint formulations.3 The RMA coating technology is now being used in different application areas and on a variety of substrates, including primers, metals, wood, and concrete. This technology has opened many opportunities, such as improvements in productivity, energy savings, an improved EH&S profile, and an overall enhanced property profile in terms of chemical resistance, mechanical performance, and durability compared to standard 2K polyurethane (PU) systems and polyaspartates.

A potential limitation of fast-drying coating systems, however, is that a robust adhesion performance (i.e., good adhesion performance over a broad range of substrates) is more challenging to achieve than in slower drying 2K systems, especially at high solids contents. This is partly due to the limited amount of time available for reaction with or interpenetration of primer substrates by the topcoat composition. Furthermore, the fact that relatively few polar groups are present in the polymer composition of RMA formulations may limit the degree of chemical and physical interactions with common substrates and/or pretreatments such as epoxy-amine or PU primers. On some specific substrates, wet adhesion (humidity resistance) may be lacking in robustness, potentially leading to inconsistent adhesion testing results. Especially on some epoxy-amine and PU primers dried at elevated temperatures, i.e., having relatively high conversions, improvements in adhesion robustness can be advantageous.

Several factors may influence coating adhesion on a given substrate, and adhesion is often classified as being mechanical (interlocking), chemical (e.g., covalent, ionic, or hydrogen bonds), dispersive (Van der Waals), or diffusive (interdiffusion/interpenetration between layers) in nature. On substrates such as porous concrete or wood, mechanical adhesion may play a significant role. On metals and primer substrates, adhesion performance is typically determined by chemical, dispersive, and/or diffusive forces. Wetting of the substrate by the paint is a qualifier for obtaining good adhesion but is not sufficient in itself. Similarly, the presence of e.g., covalent or hydrogen bonds between the coating and the substrate does not guarantee that a coating will pass adhesion testing, although it is often an important factor. The dissipation of energy in a cured network is another very important aspect, which governs how effectively cracks propagate through a coating system. Ductile networks typically have better adhesion performance, while brittle coatings or coatings which carry high internal stresses due to, e.g., shrinkage, may adhere poorly.4

In this article, we report on the synthesis and application of novel malonated RMA donor resins with improved adhesion performance over a range of substrates.

All raw materials used in this study are commercial products available in bulk. The described malonated polyester resins were synthesized in common laboratory glassware (round bottom flange reactor fitted with mechanical stirrer, nitrogen inlet, and a packed column with Dean-Stark type distillation set-up) at 1.5–4 kg scale. The synthetic procedure consists of two steps: (1) esterification of anhydride/carboxylic acid-functional monomers with an excess of hydroxyl-functional monomers at max. 240°C resulting in oligomeric, OH-functional materials having an acid value (AV) lower than 1 mgKOH/g; (2) transesterifi

cation of the prepolymer with, e.g., diethyl malonate at 170°C, finishing at reduced pressure to drive conversion. Table 1 lists the used malonate polyester resins MPE1–MPE4 and some of their main characteristics.

The white pigmented topcoat formulations (see Table 2 for a representative formulation based on malonate resin MPE1) are based on malonated polyester resins MPE1–MPE4 (Table 1) or mixtures thereof, ditrimethylolpropane tetraacrylate (DiTMPTA), a carbonate-blocked strong base catalyst, the kinetic additive succinimide, and several additional paint components. The mill base was prepared in DiTMPTA. Paint formulations based on the other malonate resins are very similar to the formulation shown in Table 2, with small variations depending on the precise characteristics of the donor resin. 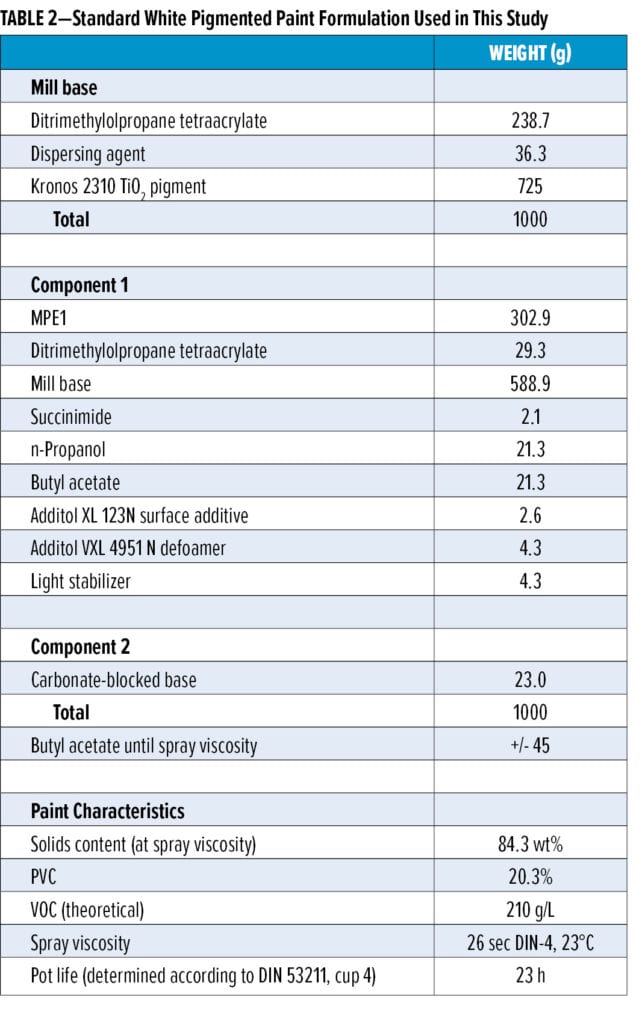 The formulated white topcoats were applied onto room temperature dried and baked (30 min, 80°C) phenalkamine-based epoxy primer using conventional spraying equipment. The dry film thickness of the topcoats was 50–60 µm. The topcoats were subsequently left to dry at 23°C and 55% relative humidity (RH). Adhesion testing was performed by standard cross-hatch testing according to the ISO/DIN 2409, ASTM D3359 protocol. Wet adhesion was tested by submitting samples to Quick Condensation Testing (QCT) prior to the cross-hatch adhesion test.

For the RMA coating system introduced above, the main potential causes for limited adhesion robustness were investigated. Using a method from the Coatings Research Institute (CoRI), which involves coating a thin steel strip and measuring deflection, it was found that internal stresses in these RMA systems, caused by, e.g., shrinkage after vitrification, differences in thermal expansion between coating and substrate, or moisture uptake/release, are rather limited and comparable to stresses present in common 2K PU coatings. RMA coatings cured at room temperature showed very low stress build-up. Also, wetting of primer substrates by the RMA formulations is typically not a critical factor, as shown by surface tension measurements. The polarity of the resin system and the potential for the formation of covalent or physical bonds to the substrate, on the other hand, does seem to play an important role. The first generation malonated polyester (MPE1) is a relatively apolar material with predominantly ethyl ester end-groups. In screening experiments, it was found that by increasing the OH–group content of a malonated polyester resin from 0.3 mmol/g to 1.6 mmol/g, especially the wet adhesion of this resin on epoxy primer was improved significantly: the percentage of delaminated coating area upon cross-hatch testing performed after 28 days of QCT exposure decreased from 100% to only 10%. On epoxy primers, which carry many secondary OH–groups originating from the epoxy component, the increased potential for hydrogen bonding as well as the overall increase in polarity may explain this observation.

These different compositional factors were combined using mixture response surface Design of Experiments (DoE), in which the first generation malonated polyester (MPE1, Table 1) was mixed with varying amounts of an OH-functional, malonated polyester MPE2, as well as with amounts of a medium OH, higher hardness polyester MPE3. The different RMA donor resin mixtures were applied in a standard, white pigmented coating composition (Table 2), which was evaluated in terms of drying performance, hardness development, and dry and wet adhesion (QCT). Table 3 summarizes the DoE runs and measured results. 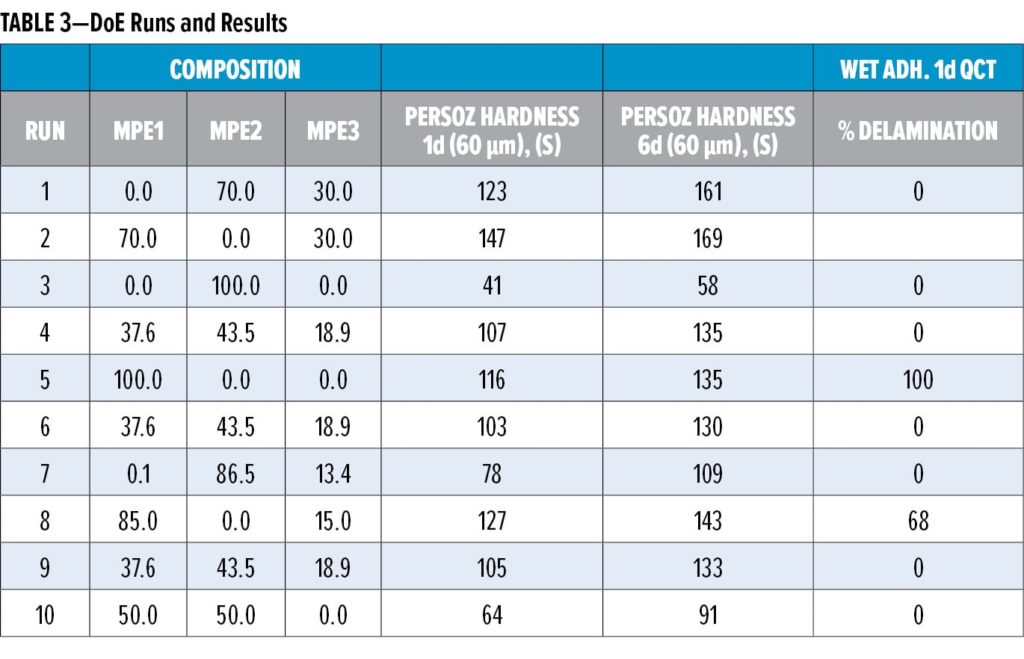 From Table 3 and Figure 2, it becomes clear that both MPE2 and MPE3 have a rather positive impact on the adhesion performance, which is thought to be due mainly to their OH content. Based on the models resulting from the DoE study, the donor resin composition was, therefore, optimized for both hardness development and adhesion. In addition to working with resin mixtures, the features of the optimized donor composition were translated to a new resin recipe (MPE4, Table 1), which was prepared and compared to the reference and the optimized mixture of resins (Table 4) in white topcoats on the epoxy primer. 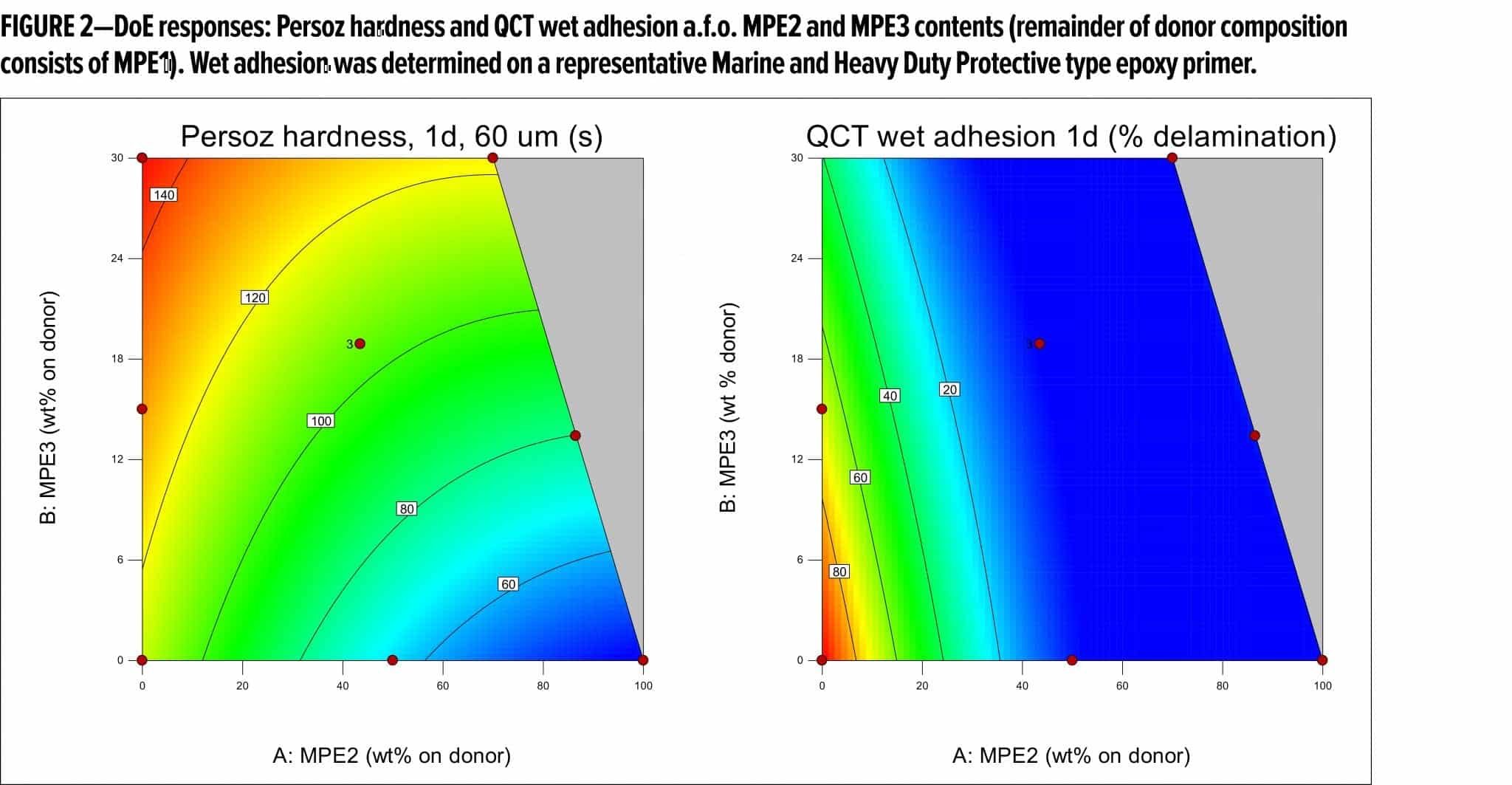 The three coating compositions in Table 4 show comparable drying times and also hardness build-up after one week is similar, although the hardness of especially the composition based on MPE4 is consistently higher than for the other systems. Gloss, coating waviness, and dry adhesion performance are quite similar for all topcoats, but striking differences are observed in wet adhesion as determined by QCT testing. While the coating based on MPE1 delaminates almost completely, the optimized resin mixture MPE1/2/3 65/25/10 performs much better. When incorporating all features of this mixture into one polymer (MPE4), the adhesion performance is also very good. The RMA coating based on MPE4 shows the best overall performance profile of the three tested systems. The newly developed malonated polyester resins resulting from this work have already shown their merit on a range of primer substrates.

The introduction of OH-functionality in the RMA donor resin composition leads to significantly improved adhesion performance of RMA paints on RT dried and baked epoxy primers. These new RMA donor resins facilitate the application of this novel coating technology in an expanded range of applications where humidity resistance is of great importance, such as ACE and protective applications.

The authors would like to thank allnex for permission to publish this paper.