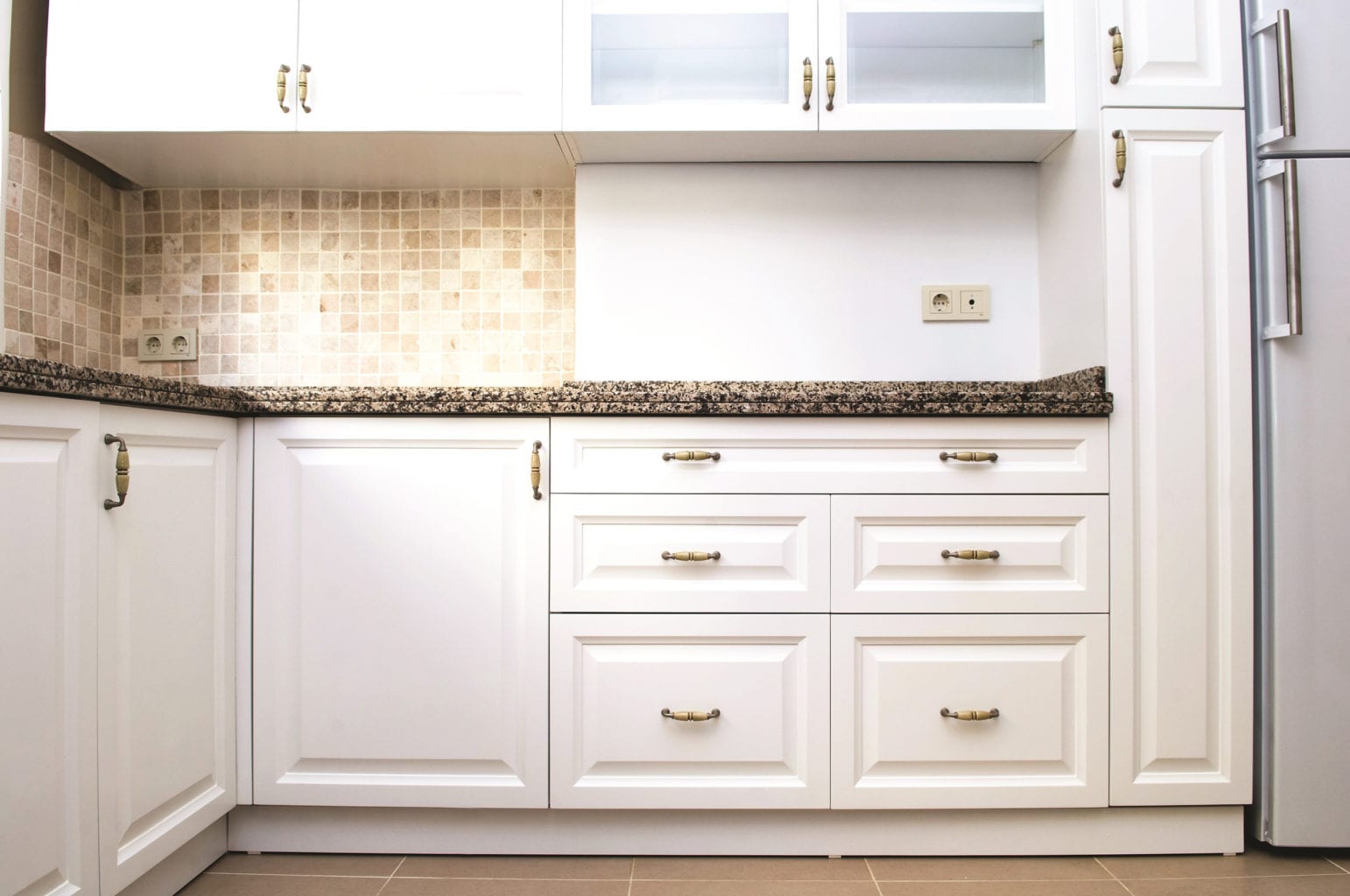 Additives formulating can be resource intensive and time consuming to paint manufacturers due to the plethora of ingredient combinations and interactions that affect performance properties.  These challenges may inhibit the efficacy of selected additives, which are particularly important in low-VOC formulations to address foam control, water sensitivity, and general surface properties.  Silicone additives in particular are disproportionately influential in impacting film properties at low use levels given the material’s distinct chemistry.  High throughput methodologies have been developed to screen and identify top performing additives candidates to address desired performance targets.  The use of slip/mar additives has been a recent area of focus, with high throughput methods aiding in the exploration of additive impact on properties that include friction coefficients, mar and abrasion resistance, hardness, surface defects, and clarity. This work addresses the development of these methods and identifies top classes of silicone chemistries to balance desired film performance in wood coatings formulations.

Additives play a critical role in coating formulations and when used appropriately can impart significant performance enhancements. However, identifying the best additive package for a formulation involves screening a multitude of different additives at various use levels and material combinations. The amount of time and effort spent on additive optimization can be overwhelming. This type of screening and optimization work, however, is ideally suited to the high throughput workflows that have been developed. For over a decade, The Dow Chemical Company has been developing and utilizing high throughput equipment to accelerate coatings research.1-3 Robotics and other instrumentation tools have been developed to formulate and test an array of coatings properties such as opacity, block, burnish, stain and scrub resistance, adhesion, and rheological properties. Data modeling and visualization tools have also been developed to keep pace with increasingly large data sets as the breadth of high throughput coatings testing capabilities has expanded over the years.

As a class of material, silicone-based additives are commonly used in coatings to control interfacial properties, which affect everything from manufacturing to application and final film properties. In the industrial wood coatings space, silicone additives are often used to control process and application foam, substrate wetting, and slip characteristics. Slip, mar, and scratch resistance are critical performance characteristics in a wood coating as they affect aesthetics, feel, and durability. While silicone additives are ideally suited to control slip, mar, and scratch properties, there still remains a wide range of silicone chemistries and compositions that can be used for this purpose.

In this article, we describe a study aimed at understanding how different silicone additive chemistries affect slip and mar performance in wood coatings. With our desire to evaluate these additives in a comprehensive manner, we have utilized high throughput tools in this investigation, facilitating the evaluation of a wider range of samples, use levels, and formulations than achievable with traditional benchtop methods. We leveraged existing high throughput test methods as well as newly developed methods specifically designed to evaluate silicone slip and mar additives in wood coating formulations.

This study utilized a combination of high throughput tools and traditional benchtop methods. Of the critical properties of interest, slip performance is the most straightforward to quantify. Slip performance is reported as a measure of static and kinetic coefficient of friction. A fully automated high throughput tribometer method was developed to measure coefficients of friction for these coating samples. The tribometer used a Nylon ball applied at different loads onto the coating to measure both static and kinetic coefficients of friction. The tribometer is paired with a robotic arm and sampling system to evaluate the slip performance of sample sets unattended.

Mar resistance is a critical performance property but is more difficult than slip to quantify. Mar resistance is often synonymous with scratch resistance, but they refer to different, yet related, damage modes. According to ASTM D5178-13, mar resistance of coating is “the ability of a coating to resist damage caused by light abrasion.”4  Mar has also been defined as a kind of physical damage to a coating that affects only the first couple micrometers of the coating surface.5,6 Marring is caused by mechanical deformation of the surface of a coating, such as caused by a key, car wash, or fingernail flick (Figure 1).7-10 If the applied force is small, elastic deformation of the coating occurs, and this is fully recoverable when the force is removed. As the force increases, the coating undergoes viscoplastic deformation, creating a mar. As the force increases further and exceeds a critical value, it causes fracture in the coating typically referred to as a scratch rather than a mar (Figure 2). A coating fractured by a scratch is more severely damaged and easier to recognize as having a surface defect than a coating suffering from a shallower mar.6 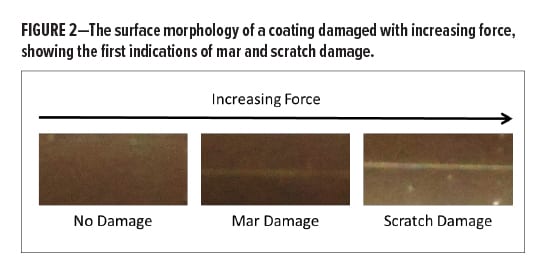 The mar and scratch resistance of coatings were measured using a traditional benchtop test method for this study, following the ASTM D-5178 method.4 The instrument is shown in Figure 3. A U-shaped scraping loop is placed on top of a coating sample. With a given load (controlled by weights put on the beam), the coating is moved back and forth on a sliding platform. If the coating is marred by the U-shaped scraping loop, successively smaller loads are used until the coating is not marred. Otherwise, successively larger loads are used until marring is achieved. The lowest load to mar the coating surface is recorded as the critical load for mar resistance. Scratch resistance of coatings was measured using the same instrument, but using the lowest load needed for film breakthrough to the substrate as a measure of the critical load for scratch resistance. 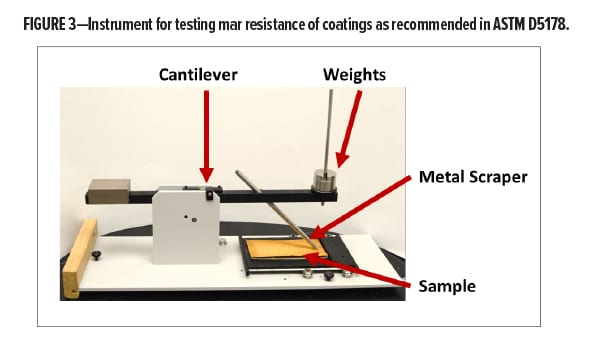 Drawdowns on glass substrates prepared using a high throughput coatings station were dried for 14 days before physical measurements were performed. Gloss measurements were made using an automated method of a handheld gloss meter tool.

Various chemistries of slip/mar additives were tested in this study. The additives can be characterized as falling into one of three categories: 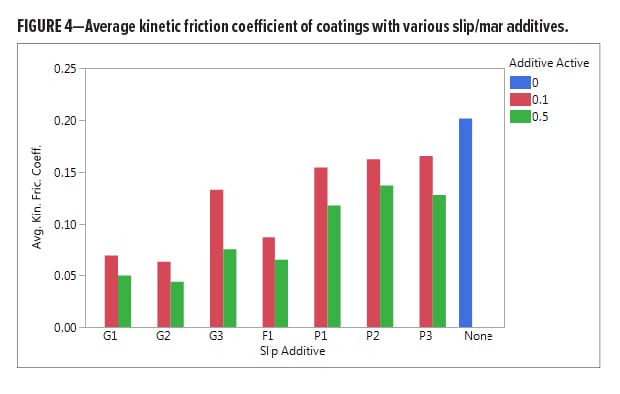 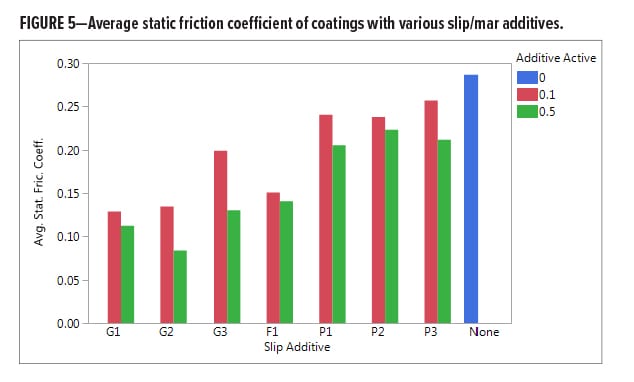 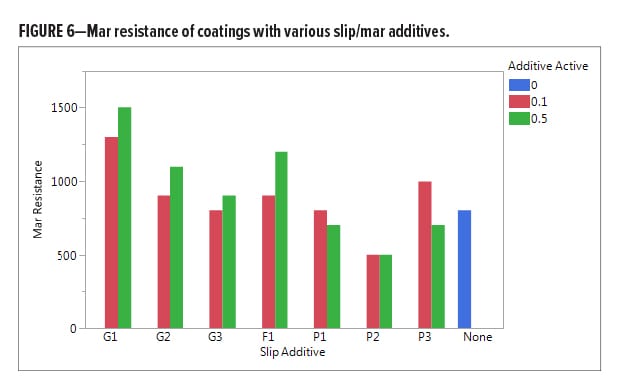 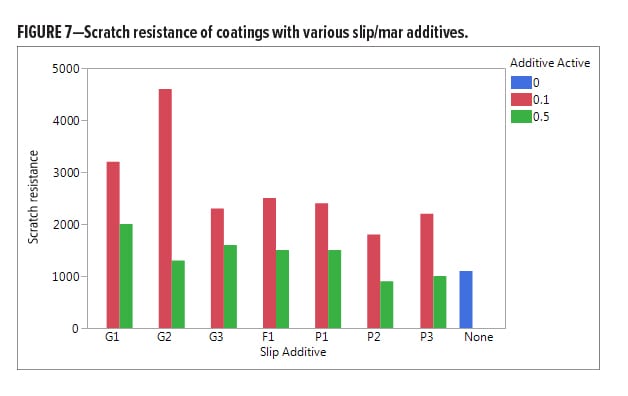 Of the other properties evaluated, including hardness, block, and film appearance, gloss was found to be the most sensitive to the different slip/mar additives. Gloss, as measured at 20° using a high throughput gloss measuring tool, is reported in Figure 8. There are significant differences between the different chemistries and even within each chemistry. The silicone polyethers have minimal impact on gloss. The larger particle-sized gum dispersions, on the other hand, show a significant gloss loss at higher use levels while at lower use levels equal the control. The impact of silicone fluid on gloss is similar to gum dispersions. 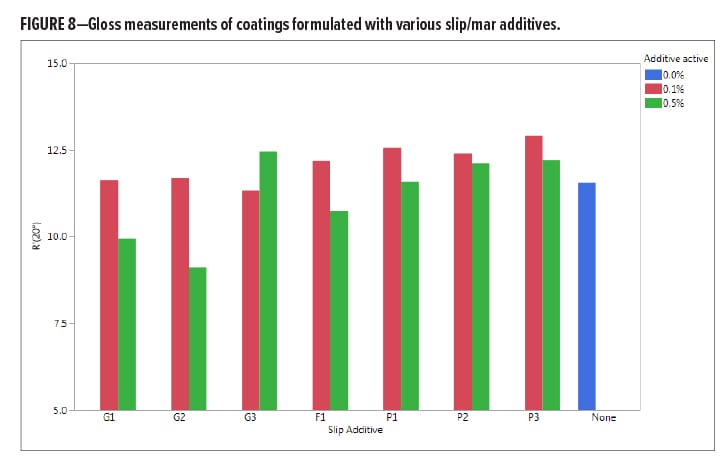 Silicone slip/mar additives were evaluated in a wood coating formulation using a combination of high throughput and traditional benchtop methods. This hybrid approach facilitated rapid screening of different additive chemistries in a formulation. Of the three additive chemistries studied (the gum dispersions, silicone fluid, and silicone polyethers), the gum dispersions offer the largest improvement to slip, mar, and scratch resistance. The gum dispersions show the best balance of properties at low use levels, offering the highest level of scratch resistance with minimal impact on gloss while still showing significant improvements in slip and mar resistance compared to the control. This type of high throughput screening approach quickly identified the best additives and use levels to enhance the slip and mar performance in a particular wood coating formulation. This same testing methodology could be easily employed across a multitude of different coating formulations, thereby greatly reducing formulation time and resources.

Presented at the Waterborne Symposium, February 4–9, 2018, in New Orleans, LA.