A fatal industrial accident at the Jiangsu Tianjiayi Chemical Plant in Yancheng, China has led to the closure of The Xiangshui Chemical Industrial Park, according to Bloomberg News, which cited the official Xinhua News Agency.

The March 21 explosion and the resulting disruption have reportedly unsettled global supply chains, particularly those involving certain pigments used in coatings, inks, and other products. ICIS reported (subscription required) that the Tianjiayi Chemical facility produced a number of key intermediates used in production of a number of pigments and dyes, including m-phenylenediamine.

This incident has highlighted the complexity of the chemical supply chain and the importance to manufacturers of non-U.S. suppliers in many cases. Pigments, in particular, have seen extensive outsourcing of production to foreign suppliers.

U.S. trade data highlight the extensive reliance on foreign sourced pigments, particularly those produced in China and India. The United States maintains a large trade deficit in synthetic organic pigments and dyes, virtually all of which is attributable to pigments and preparations classified under Harmonized Tariff Code 3204.17. China is the dominant exporter of this category of pigments, exporting a total value of $1.029 billion worth of products out of a global export market of $4.838 billion.1 As shown in Figure 1, the United States has consistently imported roughly 50 million kilograms annually, and the U.S. total trade deficit in this category reached nearly $250 million in 2018. 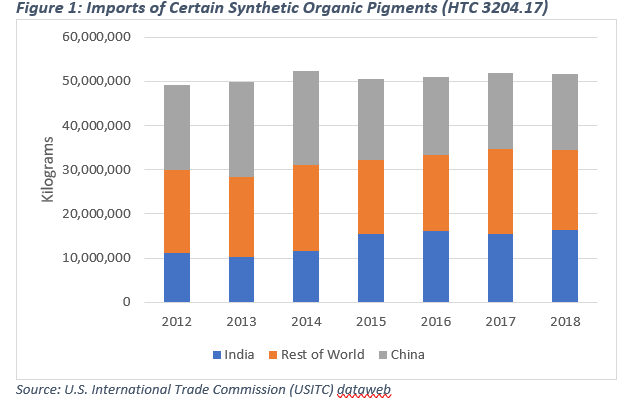 The number of pigment categories that have reportedly been affected by the March accident highlights the domination of Chinese produced pigment in U.S. imports.2  For example, HTC 3204.17.86, a category that includes a number of yellow, blue, red, and green pigments, Chinese production is dominant. As shown in Figure 2, the United States has consistently imported more than 10 million kilograms over the past seven years, and Chinese imports account for roughly half of that. 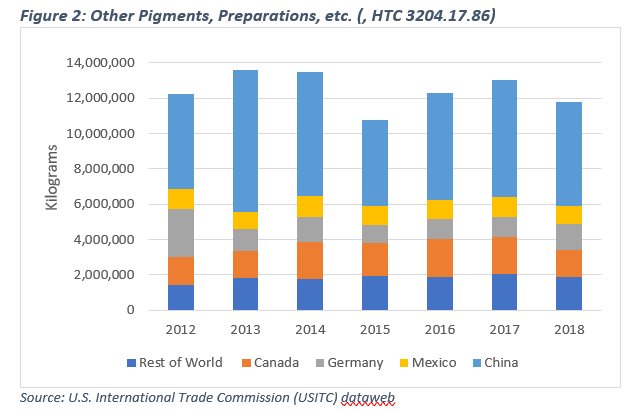 It is possible that reliance on Chinese sourced pigments is even more pronounced for certain grades or categories of pigment at a level below that captured by the Harmonized Tariff System. Given the scale of the Chinese accident, it is unclear when and how the lost Chinese production will be replaced.

2 These harmonized categories cover certain yellow pigments that have reportedly been affected.